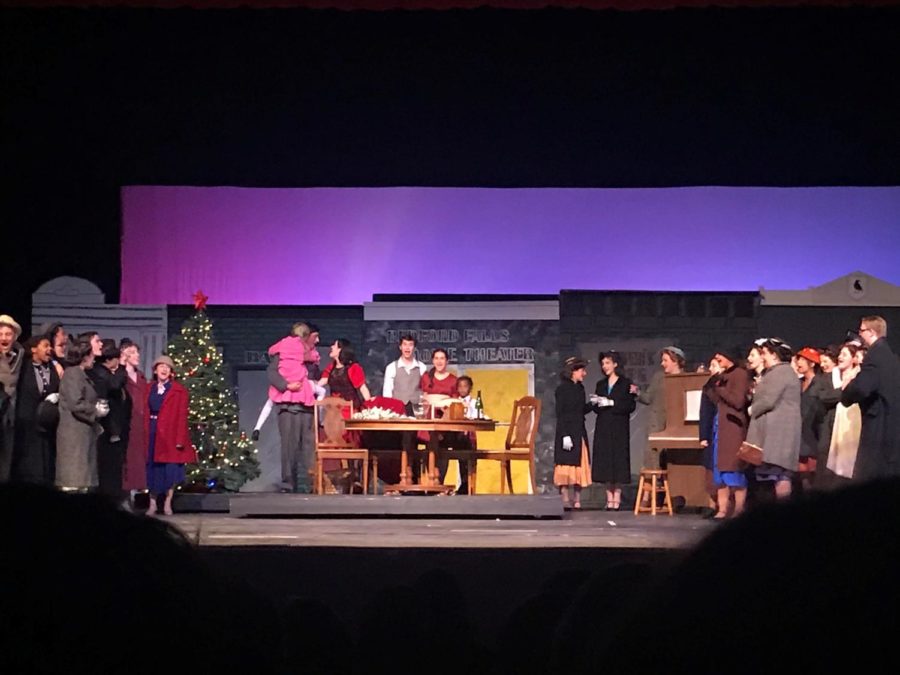 On Friday, December 1, the curtains rose on Cherry Hill East’s production of “It’s a Wonderful Life,” a holiday classic cherished by many, as it radiates the values people hold dearest this time of year: the importance of family, friendship, and the gift of giving.

The audience watches as the main character, George Bailey, played by Kevin Naddeo (‘19) in the Red Cast and Harrison Smith (‘18) in the White Cast, is in a constant battle deciding whether he should help his friends and family, who need him, or pursue his own dreams. Despite how hard he tries, he always seems to fall short, or so he thinks, until one day, he learns just how many blessings he really does have in the form of people who love him.

Great reviews quickly spread lauding the show’s professional quality and production value, which is definitely something East’s Drama Department has a reputation for. Such a high-quality production does not come without a lot of thought, time and effort, however. It takes the crew weeks of designing, constructing and painting the sets to making sure every spotlight and microphone hits its mark, as well as creating a costume for everyone from the lead roles to the townspeople.

“At first I felt like we had enough time, but as the show approached I quickly realized just how many people were in the show that need more than one costume, which led to a lot of stress,” said Erin Hurley (‘19), a member of the costume crew. But, as always, despite these challenges, the crew made the set look spectacular and the show flowed smoothly.

“We just had to really work on blocking and just give the audience the same feel as if they were home on the couch watching it on their TV,”  said Naddeo.

Frank Capra’s original film was released in 1946, but it did not earn the title of classic until TV stations began playing it often during the holiday season in the 1970s and 1980s.

Although this may have started out as an intimidating task for the actors and actresses, they all quickly found their stride and became surer of how they would interpret their character. Needless to say, the actors’ dedication and devotion to their art were evident on stage. The audience was so impressed that they gave the cast a standing ovation as they bowed.

“I think it really hit me when I took my bow on Friday. When I heard and saw the audience’s reaction, it was so surreal and it felt good that the hard work paid off; but at the same time, I’m sad that we only get two more performances. It just means that you have to leave it all out on the stage,” said Naddeo. “Mr. Weaver always says before a show, ‘What I gave, I had, and what I kept I lost forever,’ meaning you’ll never get that performance back… and that’s how I treat every show.”

“It’s a Wonderful Life” will be performing two more shows this weekend on Friday, December 8, and Saturday, December 9. In the spirit of giving, the Drama Department has a goal to raise $8,000 for Direct Relief in support of the people affected by natural disasters in Puerto Rico, Texas and Florida. By going out and seeing the show, you are not only supporting the East community, but also those who are in need of help this holiday season.