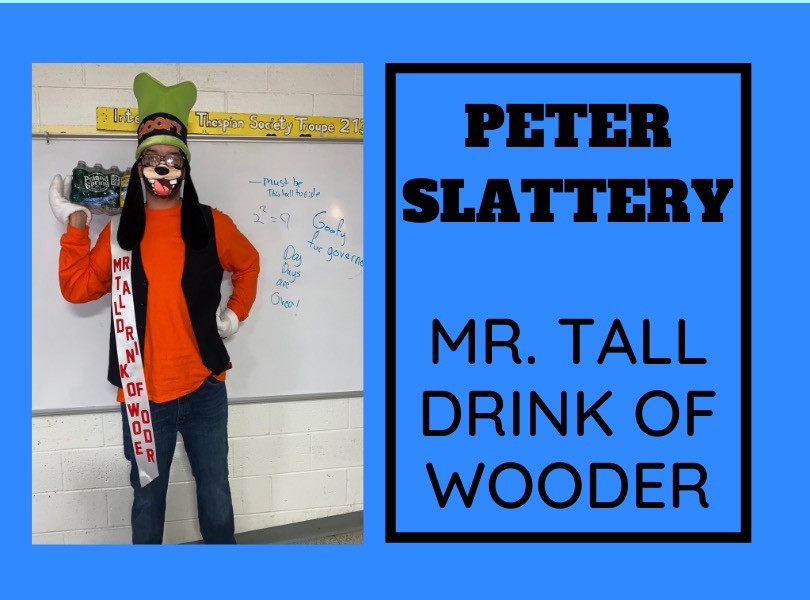 Peter Slattery (’21) has been working so hard to put together his entertaining act for the 2021 Mr. East competition .

During histamine at East, Peter Slattery (‘21) has participated in activities such as choir, theatre, a few other small clubs and he is a member of the Thespian Society. Competing as “Mr. Tall Drink of Wooder”, Slattery hopes his performing arts background will help him land a spot on the podium at this year’s Mr. East competition.
Slattery was first inspired to compete in this year’s contest during his sophomore year when he participated in Kevin Naddeo’s (‘19) Mr. East act. Though inspired by his time in Naddeo’s act, Slattery has chosen a non-musical approach to his act— a comedy skit.
“I just wanted to go out with something really fun,” said Slattery, adding that he opted for a comedy skit as “one last big adventure”.
Slattery also gained inspiration from his character, Goofy, when formulating his act, stating that he feels his act is very representative of the character.
“ I didn’t want people to lose interest so I tried to be as creative as possible,” said Slattery.
Slattery is looking forward to the group dance number above all else as it will be pre recorded, but performed by all of the consistent. Slattery also admitted that he feels the competition may even be better than last year.
“I think the acts are going to be a bit more robust this year,” said Slattery.
Though when asked what he has done to prepare for this year’s competition, he said: “What have I done? Nothing.”
As far as preparation goes, Slattery tends to handle things as they come and emphasizes the fact that his top priority is not winning, but having fun before highschool ends.
“I’m not trying to wow anybody, like I’m not trying to show off. I just hope that while they’re watching it, they enjoy it,” said Slattery.
Slattery feels his biggest competition in the Mr. East pageant will be either Pete Cuddihy (‘21) for his talents in the performing arts, or Anish Suresh (‘21) for his Rubik’s Cube expertise.
“Competition breeds creativity so I am looking forward to everyone’s acts,” said Slattery.
Nevertheless, Slattery remains confident in his act’s ability to please the (virtual) crowd.
“My Mr. East act isn’t to prove why I should be Mr. East, but rather while you’re watching I hope you have fun and I have fun putting it together.”
All in all, “Mr. Tall Drink of Wooder” hopes to place top three in the 2021 Mr. East competition on April 23. But more importantly, he hopes to have a good time.