As someone who hiccoughed her way though childhood in Buddy Holly EPs, and thinks it would be just swell to share a chocolate malt with James Dean (or Steve McQueen), to this reviewer, nostalgia is a near marketable service.  Kindred spirit Alex Zhang Hungtai, aka Dirty Beaches, shares the affinity for retrospection, and can bottle it and deliver it to the wistful masses in his 1950s-via-2011 new album, Badlands.  Of course, the whole retro shtick is an extended pretension, but done with such cheeky and genuine reverence for old-school rock-and-roll masters that it’s just the bee’s knees, cats.

Badlands was clearly made under the influence, most notably of early crooning rock greats like Roy Orbison, Elvis Presley, Jerry Lee Lewis, but also of filmmaker David Lynch.  And all these rather wide-ranging influences are worn openly on his sharkskin sleeve.  Hungtai switches between Presley’s curled-lipped vocal swagger, Orbison’s crooooooning and his own breathy baritone from track to track.  He’s no stranger to their subject matter as well, crafting appropriately lovelorn ditties and even veering towards Lewis’ creepy territory in jailbait lament, “Sweet 17.” 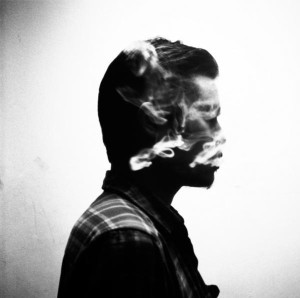 He authenticates his retro stylings with a studied impression of rock history, even throwing in the classic, melodramatic charm of a spoken word bridge on “True Blue.” And he imitates another master with his Lynch-ian combination of 1950s sounds and swagger with discordant production for an unaccountably haunting soundtrack to a breakup/breakdown/murder, most notably on closer, “Hotel,” which seems to have been just barely cut from “Twin Peaks.”  Few intricacies of early rock, rockabilly, surf rock and crooning are lost on this album, with even the telltale vinyl sound crackling behind Hungtai’s vocals.

On opener, “Speedway King,” Hungtai introduces his simple, looped riffs and adopted vocals, implementing a Little Richard style falsetto to sing about the “speedway Cadillac king” (those are essentially the song’s only lyrics).  “Horses” has a surfish rumble of drums and finds Hungtai singing in a sultry, vibrato-heavy growl, its masculinity interspersed with Buddy Holly’s famous hiccoughed endnotes.  “A Hundred Highways” borrows the repetitive riff of the Undertones’ classic “Teenage Kicks” (or the Misfits’ “Some Kinda Hate” — depends on who you ask) and the name of the posthumous Johnny Cash album.

Lyrically, Hungtai is fairly immature, but his old-timey love letter pattern mostly adds to the ruse.  Hungtai’s music is looking back to a time when, on the radio at least, love was as simple as “darling, I really care about our relationship,” as said on “True Blue.” And as every 50’s ballad needs, there are some pitch-perfect falsetto wailings to emphasize the dangerously slow-burning dejection.

As much as I’ve raved on about Hungtai’s old-school authenticity, that he can only be described in terms of other artists makes him no great innovator.  While he is a master of paying tribute to early rock heroes, he’s so stuck in the past, that he’s practically a broken version of the records he invariably collects.  Badlands is an anachronistic relic, a displaced artifact of the age of art deco and the Truman Doctrine, but nonetheless a neat trick in hero worship and rock veneration. It may not be revolutionary, but hey, neither was the 50s.  Both sure are nifty though.