The queen’s death leaves behind a mixed legacy 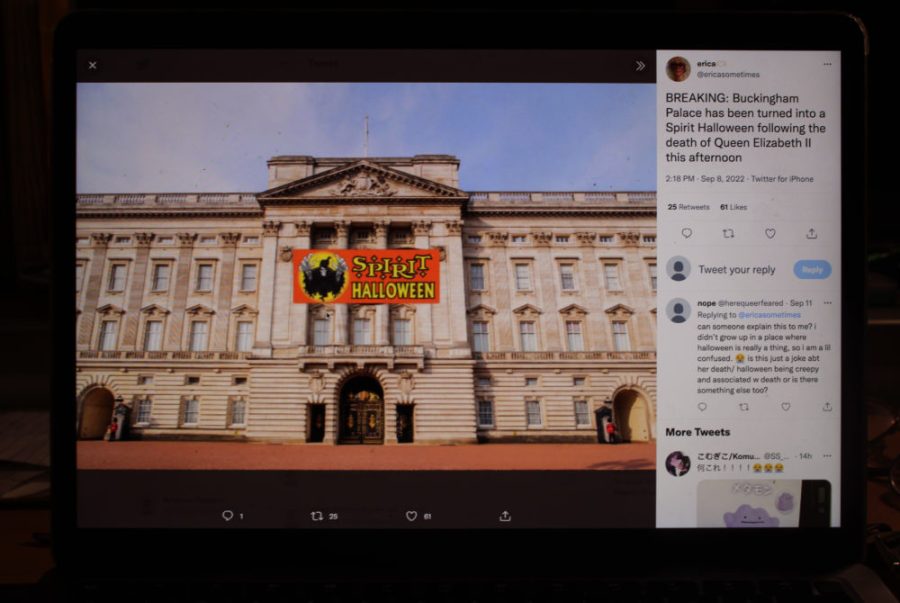 An ode to the lighthearted reaction of the younger generations. (Courtesy of Krishna Rajpara/The GW Hatchet)

From the streets of London to the governments of the world, the death of Queen Elizabeth II was accompanied by one of the largest, and most varied, outcries of reaction globally. No world leader with any significant connection to Britain was there that did not address the aged monarch’s death. Condolences, prayers and tributes to her long-spanning career were the order of the day. Even traditional geopolitical enemies of the United Kingdom sent their respects to the royal. “I wish you courage and resilience in the face of this difficult, irreparable loss. May I ask you to pass on sincere condolences and support to members of the royal family and the entire people of Great Britain.” said Vladimir Putin, President of the Russian Federation in response to the queen’s death. Other countries, such as Trinidad and Tobago, an ex-colony of the world’s largest empire (ruled for decades by Queen Elizabeth) had a more limited response with more of an ode to the past than the present. “Though Trinidad and Tobago gained its Independence and later became a Republic, this country recognizes the lasting legacy of Her Majesty,” said the Prime Minister of Trinidad and Tobago Keith Rowley. Albeit with altering tones, the reaction of political figures around the world was cordial and respectful to the royal family.

However, this is not the case with the rest of the world. In some parts of the globe, commemoration became very liberally mixed with condemnation. In Ireland, only recently at peace after centuries of embroiling conflict with England, a wild display of joy at the queen’s death erupted at the Tallaght Stadium in the midst of a soccer game. Just moments after the death, fans began chanting “Lizzy’s in a box,” with the jeer and might of centuries of oppression and bloodshed. Indeed, Ireland has perhaps suffered more than any other country at the hands of Britain. Even today, the population of Ireland is somehow lower than it was two centuries ago in the 1820s. This is a result of famine and war, in which Britain played a major role, leading to an exodus of millions from their ancestral homeland. More Irish angst was captured in a now viral TikTok featuring an Irish tap dancing group dancing to ‘Another One Bites the Dust’ in front of Buckingham Palace, supposedly after the queen’s death. The video garnered a tremendous concentration of criticism against the monarchy and its legacy. It was later revealed that the video was taken months before the queen’s death, but the sentiments aroused around the TikTok video remain much in force.

Nor are the Irish alone. In the political sphere, a chorus of anti-monarchical voices have risen directly following the queen’s death. Some of the most poignant voices come from the governments of Belize, Jamaica, and the Bahamas. These countries have frequently railed against the role played by the British royal family in colonization and sought official apologies from the family. Although some members of the royal family have acquiesced, Queen Elizabeth never did.

Age seemed to also play a role in reactions to the queen’s death. While older, traditionally more conservative people tended to mourn over Elizabeth’s loss, the younger generation seems to have instead chosen to create memes and casually acknowledge her death.

Just like the mixed recognition of her death, Elizabeth II leaves behind a complicated legacy as the crown ruler of the United Kingdom. On one hand, she was a charming, witty woman who played a crucial role in the forming and maintaining of the post WW2 world order and remained a steadfast force in international politics. On the other hand, she was a supporter of British imperialist policy, and not a word of public apology addressing her empire’s rampant colonization and exploitation of ex-imperial holdings left her mouth during her time as queen. Whether for her cruelty or her benevolence, however, the world will remember her.