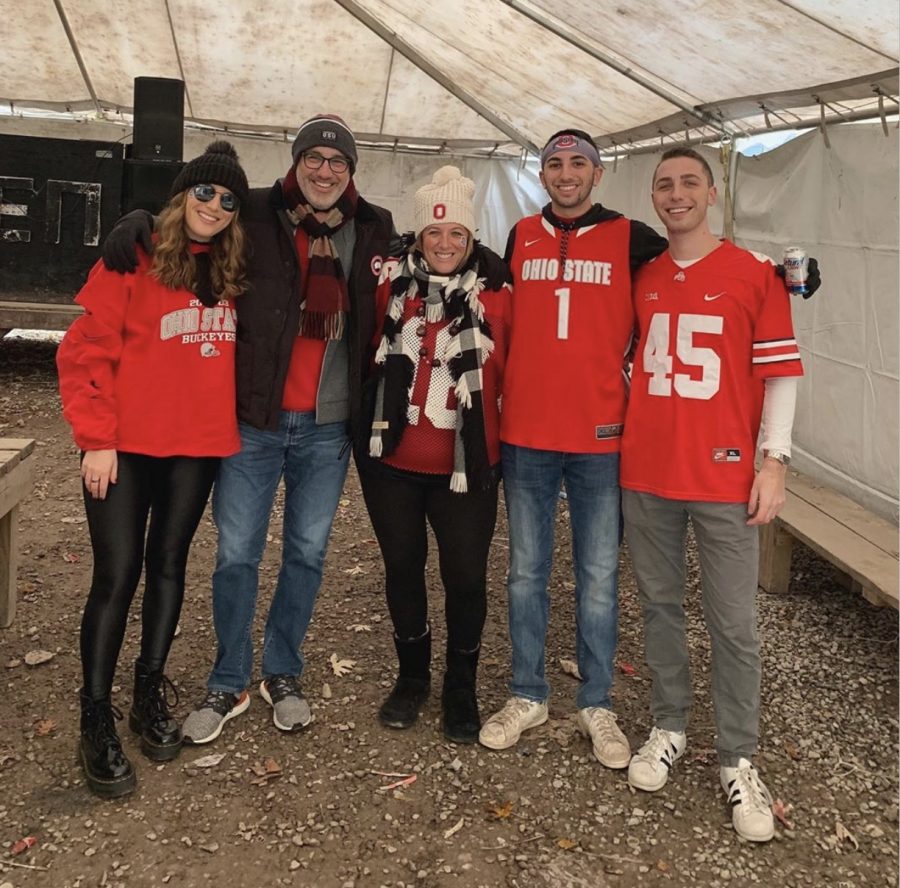 The hardest part of high school, for most students, is having to go through the long and challenging days alone. However, for the Hoffman Family, this was not the case. The family was lucky enough to share similar memories, at the same familiar place. Ken Hoffman (‘86), Sherri Hoffman (‘86), Abby Hoffman (‘14), Max Hoffman (‘14) and Drew Hoffman (‘18) all attended Cherry Hill East. They all had remarkable, yet, extremely unique high school experiences.

Their journey began when Ken Hoffman and Sherri Hoffman met in fifth grade at Woodcrest Elementary School. The two were acquaintances and remained friendly throughout middle school and most of high school. However, Sherri and Ken Hoffman did not begin dating until their last year of high school.

Sherri Hoffman said, “We began dating senior year and we have been together ever since.”
Ken eventually went off to attend University of Rhode Island and Sherri Hoffman attended the Philadelphia College of Textiles and Science, but distance never tear them apart.

After college, Sherri and Ken moved back to Cherry Hill to start the next chapter of their lives. They could not imagine living anywhere else.

Sherri Hoffman said, “Both our families lived in Cherry Hill, so we knew we’d end up back here.”

After moving back to Cherry Hill, Sherri and Ken got married and had three children. Twins, Max and Abby Hoffman, were born in 1996 and their younger brother, Drew Hoffman, was born four years later in 2000. The three kids followed in their parents footsteps attending Woodcrest Elementary School and later attending Cherry Hill East. All five of the Hoffmans had very different experiences at East, but they are all appreciative for the time they spent at the school. The whole family agrees that East prepared them for the next chapter of their lives.

Max Hoffman said, “I was able to thrive after high school because of all the things East have taught me. East provided me [with many opportunities].”

Ken Hoffman was your typical high school jock. Aside from academics, his main focus in high school was sports. He played baseball for three years of high school. He was on the freshman team his freshman year, but was on junior varsity his junior year. Finally, during his senior year, he finally received the opportunity to play on varsity. Although Ken Hoffman loved baseball, his favorite sport was definitely hockey. Ken Hoffman played club hockey all four years of high school. During Ken Hoffman’s junior year, his hockey team won the Flyers Cup in April 1985. Although this was a tremendous accomplishment in his life, Ken Hoffman’s most proud high school moment was making it to the Hall of Fame his senior year. It was a major honor to have his picture hung up in the East hallways.

Sherri Hoffman had a very different high school experience than her husband. She did not participate in any sports, but she did take part in some activities. Sherri Hoffman was a biology aid her sophomore year and wrote the biographies for the Senior Hall of Fame her senior year.

Max Hoffman had a very different high school experience than his sister.

Unlike Abby Hoffman, Max Hoffman could always be spotted in the D-Wing acting for the school plays or singing for one of his many musical groups.

Max Hoffman said, “I did all the shows. I was also in E-singers, Casual Harmony and Madrigals.”

Still to this very day, Max Hoffman can always be found singing and acting. He currently lives in New York with his sister, in attempt to pursue his dreams as an actor.

Lastly, Drew Hoffman participated in more activities than anyone else in his family.

Although every member of the Hoffman family had a completely different experience at East, they all treasure their four years and feel blessed to have such great high school memories.

Sherri Hoffman said, “I think the best experience as parents was having all three of our kids graduate from the same high school as we did. Having all five of us go to the same elementary school and high school was pretty special.”

The Hoffman family shares a unique connection that not all families share. The five family members got to grow up in the same area and attend the same public schools. This enables the family to feel a special tight-knit bond that they would not trade for the world.