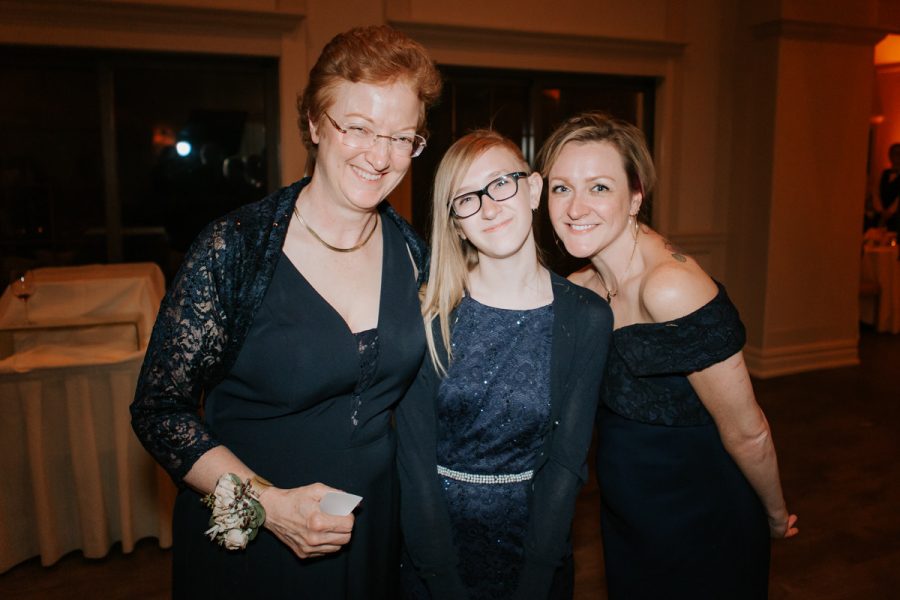 Since opening its doors in 1967, Cherry Hill East has educated thousands of students. While East graduates attend college throughout the country, many are drawn back to their suburban hometown to plant roots for their own families. In recent years, the hallowed crimson and white halls of East have become the educational home to many second and third generations of East students.

For East parent, Suzanne Ferland (‘03), it has been exciting to revisit her high school alma mater with her daughter, Angela Bruno (‘22). Comprised of three generations of East alumni and students, which also includes grandmother, Marianne Ferland (‘76), Suzanne Ferland’s family has deep roots in this community. Notably, all three generations of students were fortunate to have the same dedicated crossing guard, Mrs. Claire Bauman, while attending Horace Mann Elementary School.
While participating in activities at East, these family members all discovered a shared passion for the arts. Marianne and Suzanne Ferland were both involved in East’s Photography Club and Suzanne Ferland and Angela Bruno were both members of East’s Stage Crew.

During Suzanne Ferland’s years at East, she worked on stage crew for theater productions directed by beloved drama teacher, Mr. Tom Weaver. During Angela Bruno’s freshman year, she also had the opportunity to participate in stage crew for Mr. Weaver’s productions, prior to his retirement in June, 2019.

“He’s been here since my mom was in school, he directed the crew when she was here . . . . He’s an awesome teacher,” said Bruno.

Mother and daughter also shared the experience of taking art classes taught by East teacher, Mrs. Bernadette Calnon-Buote.
“I just think it’s neat how we all ended up with similar interests, not with sports, but with the theatre and arts,” said Suzanne Ferland.

From a parent perspective, Suzanne Ferland appreciates and values the educational opportunities available at East. She made a conscious decision to return to Cherry Hill as an adult so that her children could get a great education. She also thinks that East has made a positive change by increasing school security. When Suzanne Ferland was a student, she recalls that community members could enter the school building without providing identification and students could leave East during lunch breaks.

When Suzanne Ferland was at East, her parents hosted a foreign exchange student from France organized by the French Club. Last year, Suzanne Ferland and Angela Bruno chose to participate in the foreign exchange program as a host family. Angela had the opportunity to become friends with a high school student from France during a two-week stay in Cherry Hill. The family plans to host another French student again during Angela’s junior year.

For those of you that feel like high school has gone by way too fast, take comfort in the knowledge that you can revisit the good times at East, homework-free, with your own children.