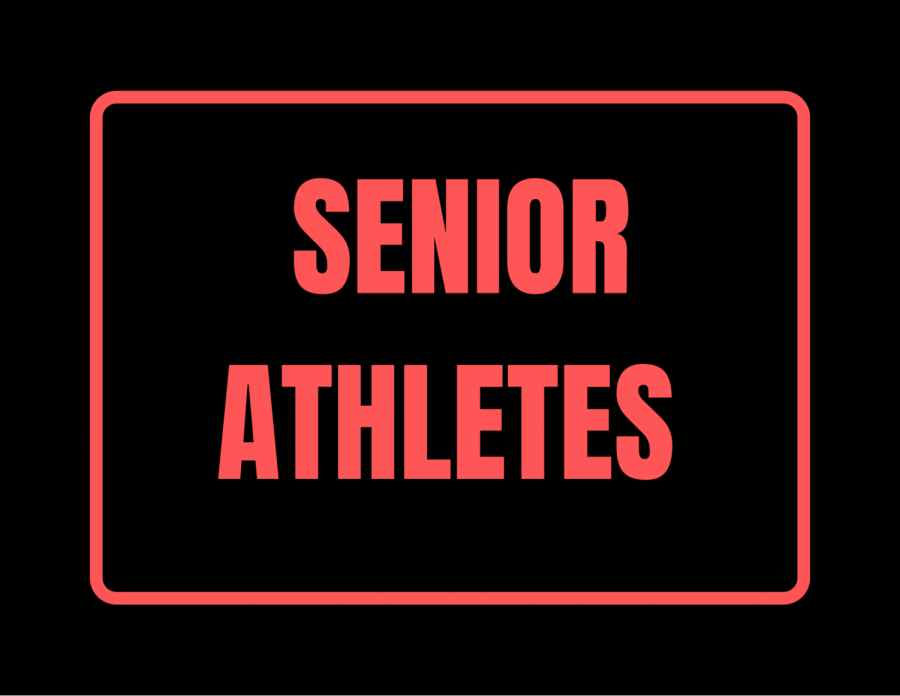 Many senior athletes had a very successful 2020-2021 season and finished off their last year strong.

Aidan Groff- XC and Track & Field
Groff was the top varsity boys’ cross country runner and a top boys’ track and field distance runner this season. He was the boys’ cross country Olympic Conference champion with a 16:05 5k. He was also a lead varsity 1600-meter runner.

“Even with fewer opportunities this year due to Covid, I have made big improvements and have been able to reach many of my goals, along with helping the team reach their goals. In the fall I’ll continue running at Saint Joe’s where I hope to learn and grow more to continue my improvement as an athlete and student.”

Aidan Weingrad- Wrestling
Weingrad was the top wrestler on the varsity boys team this season. He lost in the semifinal of the NJSIAA championship consolation bracket and had an 8-3 record on the season.

“Honestly this years season was more just an epilogue to my actual time wrestling for east. With so little time you can really go out and just try to have fun because with everything getting in the way it was just much less immersive than all the other seasons I’ve had. For my future with wrestling I intend on continuing wrestling in college and I’d like to stay close to the sport in general just because I feel like wrestling has left massive imprints on me as a person.”

Annie Behm- Swim
Behm was the top varsity girls’ swimmer this season. She qualified for the Olympic Trials in freestyle, and helped lead her team to an undefeated season. Behm finished First-team All-State in the 50-meter freestyle, as well as All-South Jersey in the event.

“Just like everything’s else different this year, our team faced a lot of diversity this swim season. Despite an abbreviated schedule, limited swimmers allowed at each meet, and other safety restrictions, we found similar success to that of years past. I could not be more proud to have been a member let alone captain of such a driven group of girls. For me personally, I am very excited for what’s ahead in my swimming career in college, but it’s bittersweet leaving the family that is East Girls Swimming.”

Aubrey Demurjian- Field Hockey
Demurjian was the lead defender on the varsity girls’ field hockey team this season. She had an outstanding senior season.

“This years 2020 field hockey season was truly unconventional to say the least. It was filled with abnormalities and inconsistency for every high school but East’s program stayed strong and competitively played every game scheduled for the fall. Although I had to say goodbye to East’s field hockey program, I will be continuing to play field hockey at Bowdoin College.”

Danny Yasenchak- Lacrosse and Football
Yasenchak was the lead special teams player and top defender on the varsity boys’ football and lacrosse teams.

“Our season is all about us we’re the only ones that can beat ourselves. We have a lot of talent and capitalize on our opportunities. I may play club in college but if not I will always love lacrosse and I hope the game keeps growing.”

Drew Luehrs- Soccer
Luehrs was a top defender on the varsity boys’ soccer team. He was a team captain as well.

“Individually I didn’t have to season I knew I could have. However, as a team we all know how well we played and we left it all out on the field. I do not have any plans after high school to continue playing soccer.”

“I am thrilled we had the opportunity to compete during all three seasons this year, especially during these unprecedented times. Although the conditions weren’t perfect, we still ran fast as a team and I set personal bests in every event so far (16:05 5k XC, 4:23 1600m). My work isn’t done yet though and I hope to continue blazing a trail for myself and Cherry Hill East. Next year, I will be attending Marist College to study Economics and run XC & Track. I am excited to be receiving this opportunity and will ensure to represent me, my family, and Cherry Hill in the best way possible. But overall, I am delighted to compete at the next level and show to everyone that I am an elite runner at all stages.”

Hank Feudtner- Soccer and Lacrosse
Feudtner was a top midfielder for the varsity boys’ soccer and lacrosse teams. In soccer, Feudtner finished the season with 4 goals and 2 assists, as well as with an All-State nomination as team captain. In lacrosse, Feudtner had 8 goals and 11 assists at the time the article was written.

“Soccer: this season was great for me personally and the team as a whole. We accomplished something that no east soccer team has done in a decade so I am extremely proud. I plan to continue playing club soccer at Fordham university in the future.”
“Lacrosse: this season has been difficult with the limitations of the covid pandemic but the team continues to fight and find success through the adversity. I am excited to continue playing club lacrosse at Fordham university next spring!”

Jadon Louis- Football
Louis was a top defender on the varsity football team. He was a team captain and had 6 sacks, 58 tackles and 13 tackles for loss on the season.

“This season to me was all about Perseverance, yes we didn’t always get the results we wanted but thats what always drove me that what always me made persevere.
I’m very passionate for this game so therefor I plan to do big things in college with this sport and I will see what the future has for me after college.”

Jillian Drumm- Soccer
Drumm was a top defender on the varsity girls’ soccer team this season. She finished as a South Jersey Top-20 player, a South Jersey All-State nominee and as a team captain. She also finished with 3 goals and 1 assist on the year.

“My senior season went very well despite the pandemic challenges. I had a lot of fun playing with my friends one last time. I’m super excited to continue my academic and athletic career at La Salle University and I’ve been training hard to prepare for it.”

“After losing out on our entire season last year, the whole track team came back extremely eager to compete and win. The whole team contributes across the board to our currently undefeated season, and we want to prove that we’re not a team that should be brushed off to the side in the eyes of the school. I’m not planning on competing at the college level and I’ll absolutely miss the spirit of competition and the feeling of accomplishing personal goals after putting in countless hours on the track.”

Justin Whitney- XC and Track & Field
Whitney was a top runner on the varsity boys’ cross country and track and field teams. In cross country he ran an official 16:58 5k.

“Track and XC are two sports that east has had a lot of success with this year. I am grateful that I was able to score points at important meets and cheer my teammates on while they were competing. I am excited that I am continuing my running career at Emory University and I hope that all my current teammates build on their success in college too!”

Lauren Ballay- Lacrosse and Soccer
Ballay was a top varsity girls’ player on the soccer and lacrosse teams. In both sports she was team captain, and had 8 goals and 1 assist in lacrosse at the time of this article being written.

“Both seasons for me were unusual but my teams and I persevered through everything and it ended up being the best season. I plan to stick with both sports in the future for as long as I can.”

Lin Asari- Baseball
Asari was the top baseball pitcher on the varsity baseball team. He pitched a shutout against Camden Catholic, threw 25 strikeouts at the time this article was written, and only struck out once as a batter all season.

“This season was not how I expected my senior season to be like, but the mentality that our team had made the year the most fun and memorable yet. I have no plans on playing sports in my future.”

“The season was full of hard work on and off the field. It was fun to have a somewhat normal season in the midst of uncertainty. I’m excited to continue my academic and athletic career at the next level, and am thankful for everyone that supported me in the process.”

Mary Fleischman- Field Hockey
Fleischman was a top player on the varsity field hockey team. She finished the year as a team captain and lead attacker.

“I would describe the season as bitter sweet, covid impacted a lot of our regular traditions. Although we were able to make new ones and make the best out of this hectic season. Personally I think field hockey will always be apart of my life whether I join a club team or just play with my friends for fun. I love the sport and always will.”

“When I think of my time in XC and Track, I view it as a metaphor of life. Through all the long runs and workouts, even the runs where it felt so hard I couldn’t finish, I always knew my teammates would always propel me forward. Showing me that surrounding yourself with people who bring you up is so important in life. My future in running includes wherever the long run takes me, and whoever joins along the way.”

Nick Brown- Football
Brown was the top offensive player on the varsity football team. He finished the season with 372 rushing yards and was voted the Jersey Sports Zone Week 3 athlete of the week.

“ Personally I believe the season was a great effort for the team and myself, it sucks that we couldn’t have gotten more games in this season and that I got injured but hopefully the team gets stronger and better in the future.”

Owen O’Connell- Volleyball
O’Connell was the team captain on the varsity boys’ volleyball team. He was the team’s lead player and had 150 kills on the season.

“My season this year had me filled with a lot of different emotions. Especially coming off of an injury and not being able to perform as an athlete as well as I used to, but at the end of the day, I am just happy I got to play the sport I love the most. I’m definitely looking forward to playing in college and being surrounded by people who are just as passionate as myself. I’m also super excited for beach season, maybe I’ll come out with a tournament win or two.”

Rachel Bliss- Softball
Bliss was the lead player on the varsity softball team this season. She was a team captain and the starting shortstop.

“This season has been a lot of fun with countless hours put into practices and games. Personally, I’ve been making great plays at shortstop, solid hits up to bat, and defensively, I’ve been my best. In the future, I hope to continue to play softball at the club level at Penn State!”

“The best part about the season is just being out there every day with the boys. I’m lucky that I got a lot of great players around me. I will be playing at Chatham University for the next 4 years, and will work hard to win for that team.”

Zeyonna Davis- Track & Field
Davis was the lead sprinter on the varsity girls’ track and field team. She was a top finisher in the 200 meter and 400 meter dashes.

“This season for me was very up and down. I just tried my best to stay consistent with my times. I will be running track in college ,all I want to do is keep progressing and working on myself.”