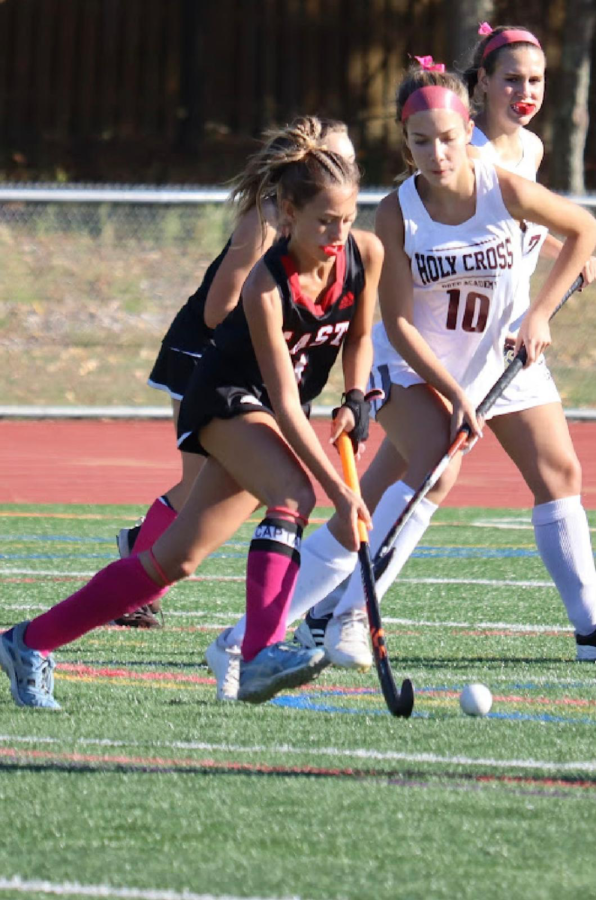 Sami Bloom (‘23) has committed to Montclair State University to play Field Hockey for the Red Hawks.

Bloom, a three-year varsity player for East, was selected to lead the East field hockey team as one of the captains for the 2022-2023 season. As a versatile midfield/forward she has been an important playmaker for the team, earning an impressive 17 goals and three assists for the Cougars this year and making her the lead scorer for East during her senior year. Last December, Bloom was selected for post-season honors as an All-Conference Olympic-National second-team player.

At age nine, Bloom began playing field hockey and loved the game right from the start. In addition to playing for East, she also competes year-round for a club team, Uprise Field Hockey Club. The sport is important to Bloom who puts in the time and effort to continue to develop new skills. Bloom decided early on that she wanted to play field hockey in college. To achieve this goal, she held herself to a high training standard and worked hard to earn a spot on a college field hockey team.

“I have been wanting to play in college my whole life. Having that opportunity and being able to continue my athletic career means the world to me. It’s my favorite thing to do,” said Bloom.

A busy student-athlete who also plays basketball and lacrosse for East, Bloom has developed strong time management skills that allow her to successfully manage her schoolwork, training, and the demands of playing for multiple teams. She is efficient with her time and appreciates the structure that sports bring to her life. Playing sports has taught Bloom leadership skills that she uses on and off the field.

Playing sports at a competitive level includes a lot of time driving to practices, spending weekends at tournaments, and traveling to showcases. Bloom knows that she is fortunate that her parents were supportive of her athletic career.

“My parents took the time . . . to make sure that I can get to where I need to be to succeed. They have pushed me when I didn’t believe in myself. I think they are the most impactful people along with a lot of my coaches,” said Bloom.

Bloom’s most memorable game from her high school career was this year’s East vs. West game. This game was especially meaningful to her because it included a great team effort by East and allowed her to execute new skills in a game against a division rival.

“We all worked together and played very well. I scored a goal on a corner and a drive which was very exciting for me. Then I scored another goal off of a reverse chip. Personally, I’ve been working on making my drive stronger and I have been working to get my reverse shot down so when I scored two goals off of those skills, it was very big for me. We all just worked together to execute,” said Bloom.

While Bloom described the college recruitment process as stressful, she is very happy with how it turned out. After visiting Montclair State, practicing with the team, and meeting the coaches, Bloom knew that she had found the right college. It checked all the boxes that were important to her, the academics were strong, the campus was beautiful, and the teammates were welcoming and passionate about the sport.

“The team had my same vibe personality wise, really had such a competitive drive that you could see. I am a very competitive person and I wanted to be part of an environment where field hockey is as important to them as it is to me,” said Bloom.