What does it mean to be perfect? A seven-letter word. A word begrudgingly specific in its definition, yet subjective in its visual. Is it an attainable goal or is it simply an illusion, a façade that can never be reached?

Ellen Hopkins tackles the elusive subject in her novel, Perfect. Written entirely in a poetic voice, Perfect is a heart-felt tale that relays the lives of four high school seniors. Perfection is a word completely ironic in its nature, unattainable yet by definition the only thing worthy of being attained. Therefore, it is only fitting that the four main characters are polar opposites of the novels title.

Each protagonist is assigned a defining adjective: “Perfect” Cara, “Pretty” Kendra, “Buff” Sean and “Bomb” Andre. A unique font matching each character’s personality adds a further distinguishing point. The fact that the characters are originally represented by only one identifying label speaks volumes. As the book progresses it becomes apparent that external forces have forced these labels upon the four teenagers. Through using these defining adjectives to “separate” each character, Hopkins says something even more cutting: external forces drive one’s definition of perfection.

One particularly intriguing story is that of Kendra. Kendra is seemingly perfect in every way due to her undeniable “beauty”. Despite her prized five foot ten inch frame, Kendra still feels a desire to alter herself. An aspiring model, Kendra endlessly strives to alter her figure from a size four to a size two. Each page of Kendra’s story reveals darker and darker secrets. It becomes quickly apparent that Kendra struggles with major body image issues.

By page 50 of the 500 page novel, there is no denying that Kendra has full-blown anorexia.

The biggest perpetrator of Kendra’s anorexia is in fact her mother. Hopkins clearly displays that without a strong home support system adolescents cannot succeed. Kendra’s mother ignores Kendra’s anorexia in hopes that her daughter will become a successful model. Later in the novel, Kendra even falls off a bicycle while trying to work off the calories from eating three jolly ranchers. Still, Kendra’s mom refuses to recognize her daughter’s anorexia. Kendra, in constant denial of her eating disorder, firmly states that she is “okay,” though she is far from it. 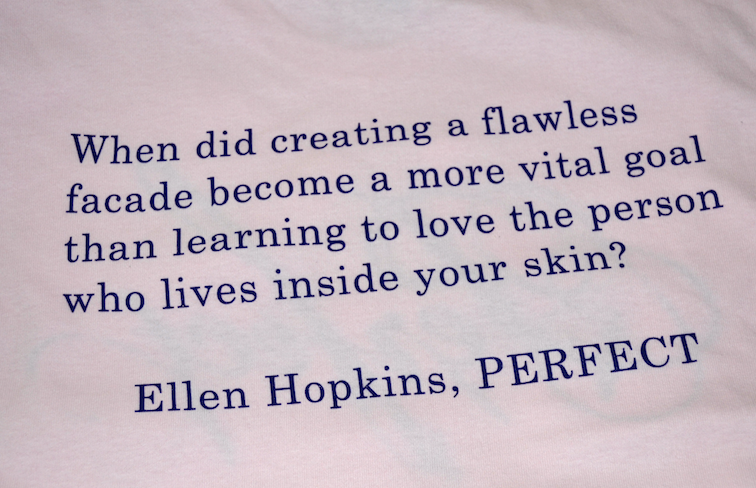 Hopkins teaches an important lesson through the character of Kendra— anorexia is a disorder that quickly worsens. As the novel progresses Kendra is not only obsessed with restricting but feels the need to undergo rhinoplasty, or plastic surgery of the nose. Eating disorders often target the cognitive process, making victims feel as if there is always another weight or bodily appearance that can achieve “perfection”.

Merriam-Webster defines perfection as the quality or state of being perfect as freedom from fault or defect. Through tragic stories of troubled teens, Hopkins recognizes the fact that “perfection” itself is not a realistic or attainable concept.