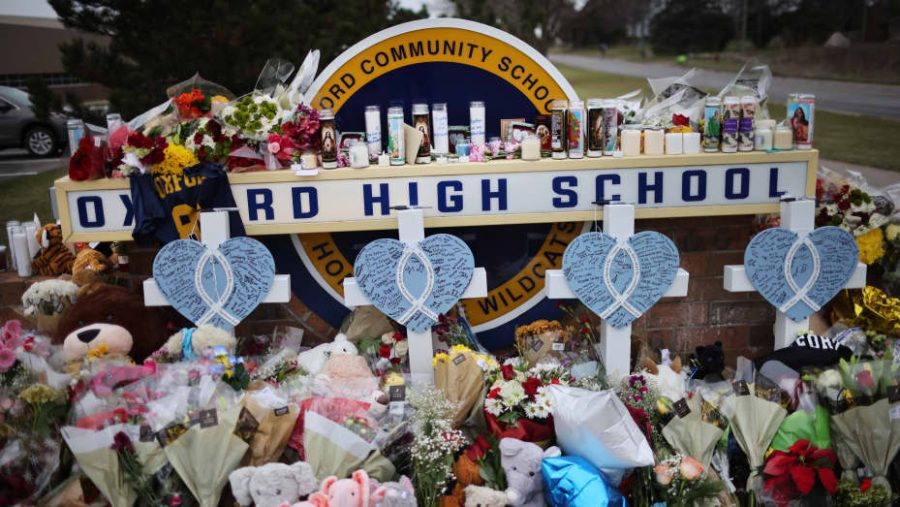 For most, November 30, 2021, was a regular Tuesday. For the students of Oxford High School in Oxford, Michigan, it was a Tuesday that they, and many others, will never forget.

At 12:51 p.m. 15-year-old Ethan Crumbley fired the first shot from a gun that would end up killing four and injuring eight. Surveillance video footage showed Crumbley entering a bathroom with a backpack and exiting with a gun in hand. From there, he proceeded to shoot down the hallway at a “methodical pace” according to prosecutor Karen McDonald. It has been confirmed that the attack was planned by Crumbley long before it took place. Authorities responded quickly and Crumbley was taken into custody within five minutes of the first shot fired.

This past Wednesday, December 1, 2021, Crumbley was charged as an adult with first-degree murder, assault with intent to murder, possession of a firearm in the commission of a felony, and terrorism causing death. There is a very high chance he faces life in prison. The suspects’ parents are also facing similar charges. After further investigation, authorities discovered that the gun used in the shooting was purchased by Crumbley’s father just days before.

It was also reported that both of Crumbley’s parents were at Oxford to discuss some of his behavioral issues the morning of the tragedy after a teacher had seen Ethan writing and drawing some concerning things, such as a drawing of a handgun accompanied with “the thoughts won’t stop. Help me”, according to Fox News. A teacher also reported that Crumbley was researching ammunition on his cell phone during class. During the meeting, administrators suggested that he leave school early and spend the afternoon at home. Unfortunately, the Crumbley’s called this unfair to their son and it was later determined that Ethan was allowed to return to class.

After the shooting, investigators uncovered two videos of Crumbley holding the firearm and talking about killing his classmates the following day. The videos were posted to his social media accounts on Monday night, yet they were not reported by any viewers. Some students even chose to stay home after seeing the posts. These students are now being questioned and some are beginning to wonder if they may be charged as accessories to murder.

Students of Oxford attended a ceremony on December 1st where they mourned the lives of Justin Shilling (17), Madisyn Baldwin (17), Tate Myre (16), and Hana St.Juliana (14). The victims were all described as “kind, intelligent, young adults” that deserved more than to be killed in such chaos. Junior Justin Shilling played linebacker on the school’s football team and attempted to stop the shooting by charging at Crumbley.

“The attack was the deadliest US school shooting since eight students and two teachers were slain in May 2018 at Texas’ Santa Fe High School, according to Education Week. There have been 28 school shootings this year — 20 since August 1 — by its tally,” reports CNN journalist Amanda Jackson.

The growing gun violence in the United States leaves many concerned for the welfare of students. Over the past few years, students’ safety has become more and more compromised due to unjust gun laws. Government laws state that almost all citizens have the right to own a firearm, but should this law be changed? To own such a weapon is one thing, but as soon as that ownership begins to put people in danger the legislation needs to be questioned.

Shooting drills have also been heavily discussed over the past few days. Students at Oxford High School praised them, but others wonder if they are really effective. “There hasn’t been a strong body of evidence that these drills are helping,” stated Megan Carolan, vice president of the research committee at the Institute of Child Success.

Almost all public schools in the U.S. practice shooting drills, normally several times a year, yet there is no set-in-stone evidence that these drills make any change in the safety of students. Although there is lacking evidence, there seems to be a general consensus that “it is better to be safe than sorry” and these drills will continue to take place across the country.

School shootings should be completely avoidable. Whether this means that security in school buildings needs to be increased, or gun laws across the country need to be tightened, change must be done. Students should not be scared to attend school.