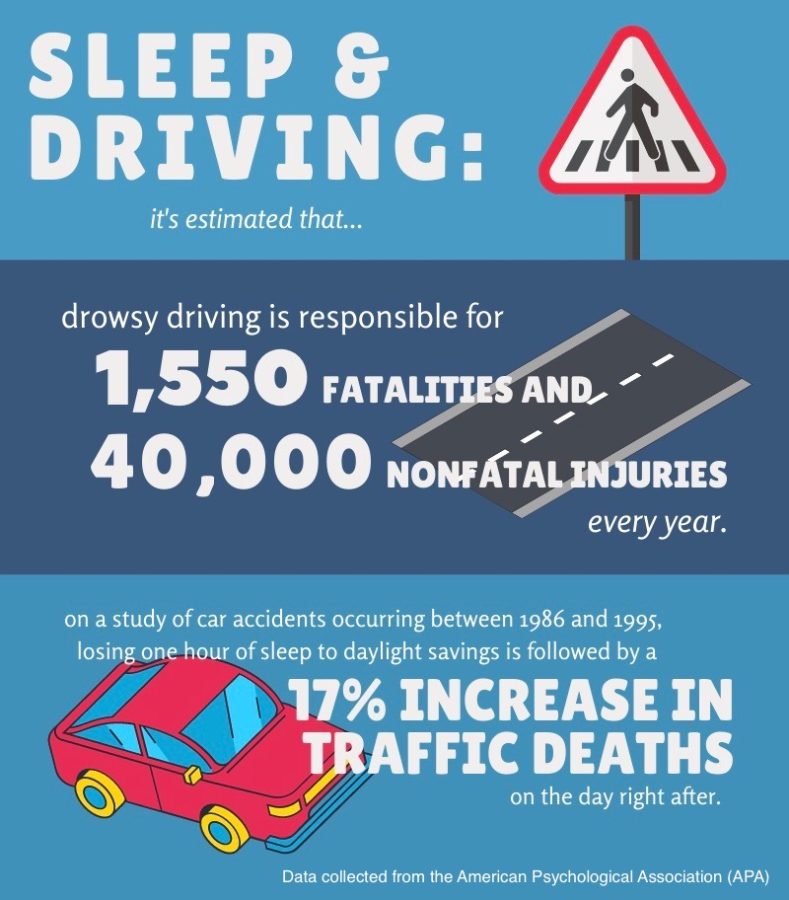 Being sleepy while driving can result in fatalities.

It’s 7:00 a.m. on a Monday morning and you’re a Cherry Hill East student on your way to school. You’re awake, though barely, as you hop into the car your parents have lent you for your senior year. After a nice weekend, you’re just hoping to make a relatively painless transition back into the school week. If nothing goes horribly wrong and you make it through to the next weekend, that will be a win.

“So much for that,” you think, as another student driver rear-ends you on Kresson Road. For students taking to the roads each school year, car accidents are a real concern. After all, young drivers are statistically more likely than their older counterparts to be involved in a crash. There are many factors that may come to mind when considering why this is the case. Greater use of technology, lesser driving experience, and less well-developed decision-making all merit consideration. One factor that’s been scientifically proven to impact the likelihood of teen car crashes may come as a surprise, however: school start times.

In 2011, researchers at Eastern Virginia Medical School sought to determine whether school start times had an impact on teen car crash rates. They hypothesized that teens in Virginia Beach, VA would manifest a higher crash rate than teens in Chesapeake, VA, as Virginia Beach’s high schools started 75-80 minutes earlier than Chesapeake’s. After analyzing data on thousands of students, their conclusions were confirmed. Over two years, the city with earlier school start times had significantly higher teen car crash rates.

After those 2011 findings were published in the Journal of Clinical Sleep Medicine, other scientists decided to pursue similar studies. In both 2014 and 2020, researchers reached similar conclusions. In addition to the comparison of neighboring districts with different start times, a single district has now been examined to confirm that these impacts exist when a district individually shifts to starting later. Today, a substantial body of peer-reviewed research exists to suggest that when schools start later, teens are less likely to be involved in Vegas car crashes.

As the 2020 study’s authors put it, these facts have “significant implications for public health and safety.” Car crashes are a significant source of danger to students. In 2019, an average of seven American students were killed in car accidents, and hundreds more injured, every day. Naturally, any way to reduce this harm should be pursued. In school start times, Cherry Hill leaders have that opportunity.

Every day that Cherry Hill students go to school earlier than is medically reasonable, (the American Academy of Pediatrics recommends no earlier than 8:30 a.m. for middle and high school students) they are put at risk. They are put at unnecessary risk of physical injury because of a decades-long decision to let logistical challenges get in the way of prioritizing students’ health and safety when it comes to school start times. As district leaders consider changing school start times, they must consider the moral imperative they have to listen to the science and protect students from increased risk of involvement in dangerous car crashes.