Lizzy Sommeling commits to University of Vermont for soccer 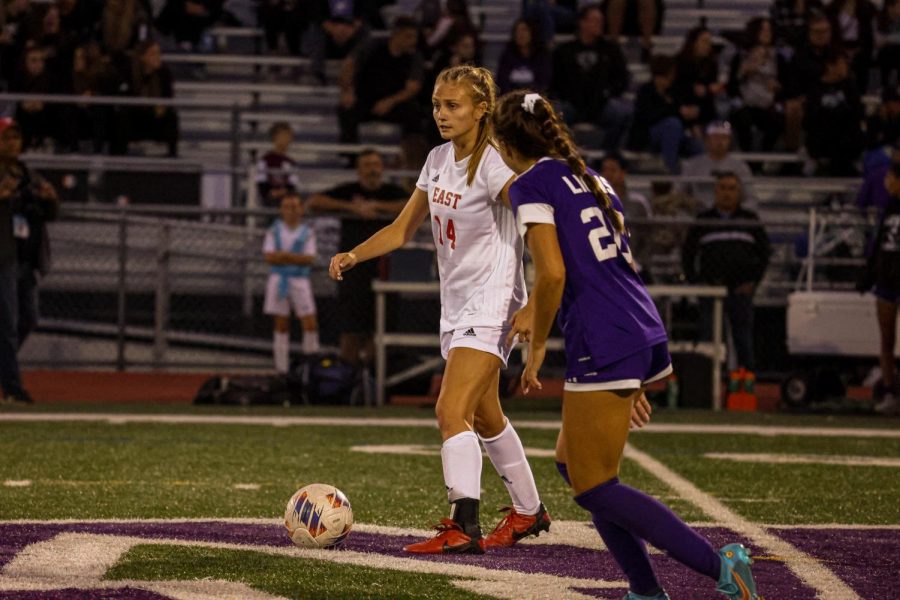 Sommeling commits to Vermont for soccer.

Lizzy Sommeling (‘23) has committed to play Division 1 soccer for the reigning America East women’s soccer champion team at the University of Vermont.

Sommeling has been a four-year varsity player for East and is currently serving in her second consecutive year as a team captain. She is a crucial player for the Cougars and demonstrates her versatility as a center midfielder. Sommeling has strong technical skills that allow her to support the offense by connecting passes while also moving to help the defense when needed. Last season Sommeling was the team’s leading scorer and recorded an impressive 12 goals and two assists for East.

Soccer has been a part of Sommerling’s life ever since she started playing in the recreational league (rec) league at age three. While she continued to play soccer and other sports during elementary school, at age 10, her focus shifted exclusively to soccer when her family moved to Italy for a year. During her time living in Italy, Sommeling played on two soccer teams, including an all boys club team. Initially, the language barrier made it even more challenging to play, but Sommeling stuck with the team and learned to play a more physical game.

“As time went on, my Italian got better and I grew to be more comfortable . . . . I think it definitely helped me develop into the player I am today,” wrote Sommeling.

When she returned home from Italy, Sommeling knew that she wanted to get serious about planning to play soccer in college and started to play year round at PDA (Players Development Academy). Sommeling’s dad has always supported her as an athlete and she views him as the person who has impacted her the most as a player.

“He has been there the whole time. He comes to every single one of my games [and] whether it’s an hour away or five minutes away, he’s there,” said Sommeling.

While college recruiting for soccer typically starts during sophomore year, COVID delayed the recruiting process for Sommeling. During her junior year, Sommeling attended national showcases with PDA in Tennessee, Florida, and New Jersey. Throughout the year, she spoke with coaches on the phone, attended clinics, and visited colleges. After receiving an invitation from the University of Vermont coach, Sommeling visited the University last January and discovered that the program offered the perfect balance of academics and athletics.

“I loved it despite the cold. It was really snowy. They set me up with a player on the team. I got to go around campus with her. . . . I got to watch a practice. All through the spring, I saw other schools, but I always compared them to Vermont. Vermont was the best,” said Sommeling.

Playing soccer at East has been a highlight of Sommeling’s high school experience. One of her favorite memories is the East versus West game during Cherry Hill Soccer Night in 2021. There was a doubleheader that night and a huge crowd came out to watch the game where she scored the tying goal.

“It’s the most fans we’ve ever had. As a girl’s sport, we don’t get a lot of love. It was really cool to have everyone there and everyone so excited for me and for the team” said Sommeling.

Soccer has played a large role in Sommeling’s life and has taught her lessons that go beyond the sport. By being a team player, she has developed strong communication skills, gained leadership experience, and has learned to always get back up and keep trying.

“The biggest thing that high school soccer has taught me is how to bring people back up and how to support your teammates, hug them when they are down, wipe their tears. It was always just rub some dirt on it for me, but as I went through high school that is something that I have learned, caring for other people,” said Sommeling.

Sommeling has a great future ahead of her and she will do amazing things at Vermont!