LGBTQ+ Representation In The Music Industry 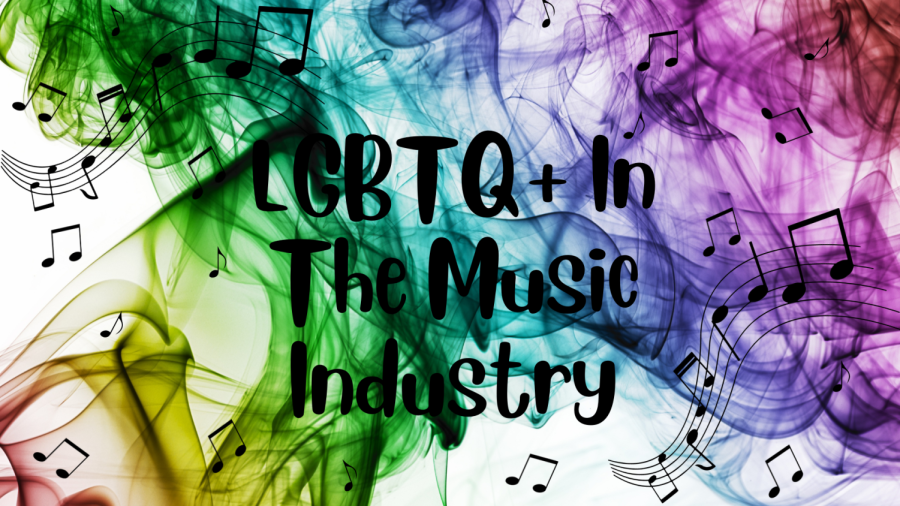 The music industry, especially country music, continues to be plagued by discrimination

For years, discussion around the LGBTQ+ community has been limited in the media because many believe the subject to be too taboo. Throughout the later 1900s and into the twenty-first century, musicians began to break through this stigma through their songs. Songs such as “Born This Way,” by Lady Gaga and “I’m Coming Out,” by Diana Ross became iconic and served as anthems for the LGBTQ+ community.
While some may look over the impact of lyrics and melodies, music has the power to change someone’s day, let alone life. Listening to a sad song can give you an outlet to cry. Belting out a love ballad can bring a smile to your face. In a world where many people who identify as LGBTQ+ feel as though they are not represented and have no outlet, music can be a powerful thing for expressing emotions.
Similar to in movies and books, representation has grown within the music industry. However, it still does not adequately represent a large portion of the world. New artist Brandon Colbein, in an interview with Billboard, said that while there is more representation, you are only “counting eight on a table of tens of thousands of people. And then you get even deeper into it and look for queer people of color, and it’s basically non–existent.” Although there are big names such as Lil Nas X who are representing the LGBTQ+ community through their songs, there are still so many other artists who struggle to get to the top. This does not take into account that behind the scenes members, such as producers, writers, and executives also are not a very diverse group.

No genre is lacking in representation more than country music, both in regards to the LGBTQ+ community and racial diversity. The country music industry has been dominated by white men for decades, with some white women gaining popularity. It is scarce to see an African American country music artist. One of the most popular Black country music artists is Darius Rucker, who found success due to his previous stint as a member of the rock band Hootie and the Blowfish. This overall lack of diversity has left listeners who enjoy country music frustrated that they are unable to artists who represent themselves.When artists do come out and show their support or allyship, they sometimes face consequences. Even after winning four Grammy awards in 2019, country music star Kacey Musgraves fails to get adequate radio time. Some attribute this to her being a woman while others believe it is due to the pro-LGBTQ+ messages of her songs. Musgraves has worked with queer musicians throughout her career and has produced two popular songs, “Rainbow” and “Follow Your Arrow”, which seem to resonate with the LGBTQ+ community. Through lyrics such as “kiss lots of boys/ or kiss lots of girls if that something your into,” “follow your arrow wherever it points” and “there’s always been a rainbow hangin’ over your head”, Musgraves has developed a reputation for supporting the community, which the country music industry as a whole does not support. Even after facing backlash and being blacklisted by most country radio stations due to her “controversial” personal beliefs, Musgraves continues to show her support. In an interview with The Guardian following controversy after the production of “Follow Your Arrow,” in 2013, Musgraves said “I just hate that people are scared of it, but I don’t want to be begging. I don’t want to be at the mercy of country radio with it.”
Over the years, many country music stars have begun to advocate for the LGBTQ+ community including Luke Bryan, Brothers Osborne and Marren Moriss. While Musgraves was met with lots of backlash for her support, singer Luke Bryan found success after producing his song “Most People Are Good” in 2017. The song included the lyrics “I believe you love who you love/Ain’t nothing you should ever be ashamed of,” and the music video features same-sex couples. Even though the song differed from Bryan’s previous hits, it still dominated the charts. So, from 2013 to 2017 the country music industry may have become slightly more accepting.

While the music industry, especially the country music industry, still has work to do, the past years have displayed enormous increases in support. Now, we just need the representation to back it up. In order for this to occur, listeners need to branch out from the artists they typically listen to and try to support more LGBTQ+ artists. For songs to listen to, click here to see Eastside’s LGBTQ+ playlist.