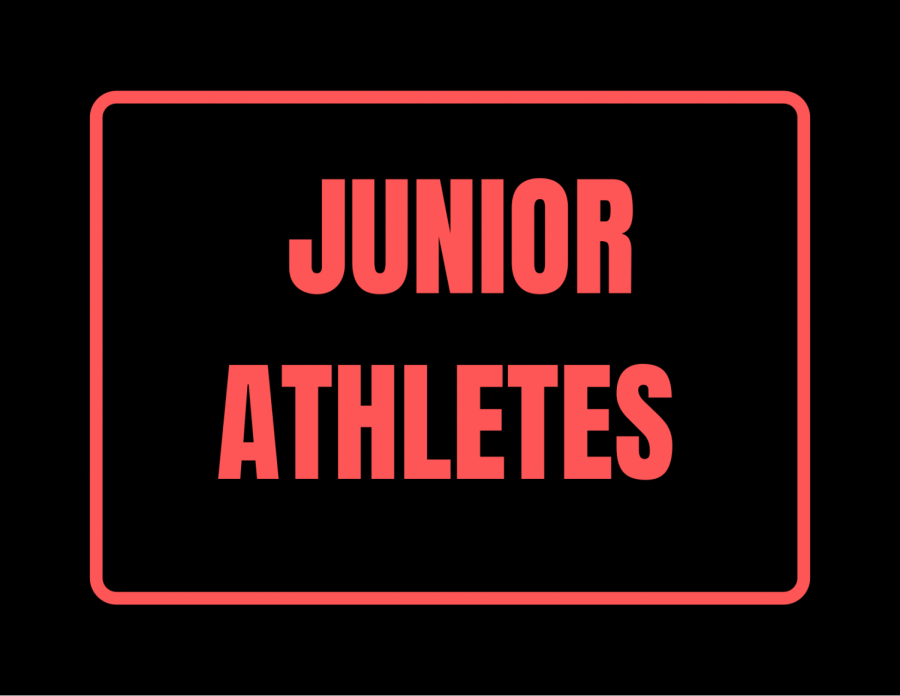 Many junior athletes had a successful 2020-2021 sports season.

Landis was the lead bowler on the varsity boys’ bowling team. He led the team with a high score of 591 on the season.

“We were pretty lucky to have the season in the first place after pushing it back 2 months, and I felt obligated to do my best. Every match I never focused on the other team, because bowling is a mental sport, and you can’t get in your own head when you mess up. I will definitely be playing for East next year, but unfortunately bowling isn’t really a college sport for males. I just hope to top my average from this year and lead my team to more victories.”

Schuster was the top varsity boys’ tennis player. He made it to the third round of the Olympic Conference Tournament as the singles one player and had an 11-4 record on the year.

“My junior year tennis season has been outstanding since I was able to earn the number one singles spot on my team. So far, our team is undefeated and I’m excited to be the co-captain and lead my teammates as we hope to achieve our goals of winning the sectional and state championships. As of now, I’m looking into colleges that offer tennis programs, so I can continue to play at the collegiate level.”

Page was the top varsity boys’ track and field high-jumper this season. He was a First-team All-Conference high jumper, and his top jump of 6-4’ was good enough for top-ten in the state at the time this article was written.
“My season personally is always fun because I love to compete but also stressful at times because you’re not sure how the season will play out. You just have to be patient and see how it goes. As far as my future goes, I love track and I don’t ever wanna stop. I just hope to continue in college and continue to improve.”

Greene led the varsity boys’ basketball team in points, rebounds, assists and steals this season. He averaged 14.2 points per game.

“The one thing I can say about this season is that it was different. Having no fans and a shortened season was weird but I think overall I am thankful that we even had games to play because I know lots of schools that did not have a season. For the future I am more than excited. We have a lot of experience and hard working guys that will be ready for next year. Our one goal is to win and we will do that by playing hard,playing smart, and playing together. I just can’t wait. It will be fun and one to remember.”

Matthews-Spratley was a top player on the varsity boys’ basketball team this season. He averaged 10.8 points per game.

“To me this season was definitely different in the way everything was conducted with COVID-19 protocols and just the way we played and interacted with each other. Everything was honestly such a learning experience and we all were thankfully able to stay healthy and stay positive while playing the game we love. Even though everything got shut down for the last three games, we were able to remain as positive as we could. Overall I feel like we had a good season even though the max games could play was 15 and we ended up playing 12 games and going 9-4. I am still very thankful we were able to play at all this season, because I know some schools never got this opportunity. I’m excited to see what this next season holds, especially with the vaccine out and COVID protocols loosening up. I hope to play college basketball and finish out my senior season strong.”

Tonghini was a varsity girls’ tennis player and top varsity girls’ track and field mile runner who went 11-1 as the singles two player in tennis, earning All-Group 4 South Jersey honors, and ran an official 5:29 in the 1600-meter run.

“This tennis season came with many challenges with all the protocols in place, but despite the setbacks we came out victorious with a successful season. Both track seasons proved to be rewarding with big improvements from all the girls in a variety of events. Our team has high hopes for the championship meets in the coming weeks to see our hard work pay off!”

Greene was a top player for the varsity boys’ basketball team. He averaged 10.0 points per game, and was a conference leader in 3-point field goals made with 28.

“I think we were all disappointed we didn’t get to play in the playoffs this year. The only goal for all of us coming into this year is to win group 4.”

“In the winter [coach] Mani always joked that I was in the “best shape of my life” and I really think that I am. The one thing that has been consistent during the pandemic has been running and I feel like all my training is finally paying off. As for the future, I’m looking forward to seeing what senior year brings.”

“There definitely has been ups and downs throughout the season. Because we haven’t had a track season in almost 2 years, I was even more motivated to accomplish more. I would like to run in college, but it is not definite yet.”

Pezzella was the top varsity boys’ swimmer. He earned 1st team honors in the All-Pacific 50-meter freestyle, 100-meter freestyle, and All-State honors in the 200-meter relay. He was also one of the varsity boys’ swim team captains.
“This season was definitely unusual but we made the best of it. We had a great freshman class that came in and things are looking bright for next season. I am going to continue to swim in college and I am currently in the process of deciding where I want to go. Wherever I end up I’m sure it will be a great experience.”

Short was a top varsity boys’ swimmer this season. He earned 1st team All-Pacific honors in the 200-meter medley relay, and 2nd team All-Pacific honors in the 400-meter freestyle relay. He was also a varsity boys’ swim team captain.
“Great season was full of excitement, I was sad to see it end so early with such a talented group of kids. Excited to see what’s in store for next year for the team and myself. My future is to bring another state title to East and commit to college for swimming within the next few months.”

Kriesman was the varsity boys’ track and field lead pole vaulter this season. He earned First-team All-Conference honors with a 14-foot pole vault.
“My season has been filled with both struggle and success. I started out the season already having a personal record of vaulting 12’6 in the winter, but my first meet of spring went poorly and I only jumped 11’6″. Now towards the end of my season, I have destroyed my previous record by jumping 14 feet (only 6 inches away from the school record). In the near future, I hope to break the school record. Since I’m only a junior, I plan on setting the bar higher than this school has ever seen.”

“This season has been a bit of a challenge, but I’ve been able to consistently getting top two for javelin in most of the meets this season. I’ve also started throwing discus and I was able to place in our last meet. My goal for Javelin this year is to get to states, and next I would like to keep improving and make it to the meet of champions. And if all goes well, hopefully achieve the school record.”

Radzinska was the top varsity girls’ volleyball player this season. She led the team with 70 kills on the season.

“Definitely my best season yet was this high school season. I’d love to play volleyball in college.”