Judaism has created a lasting impact on Cherry Hill 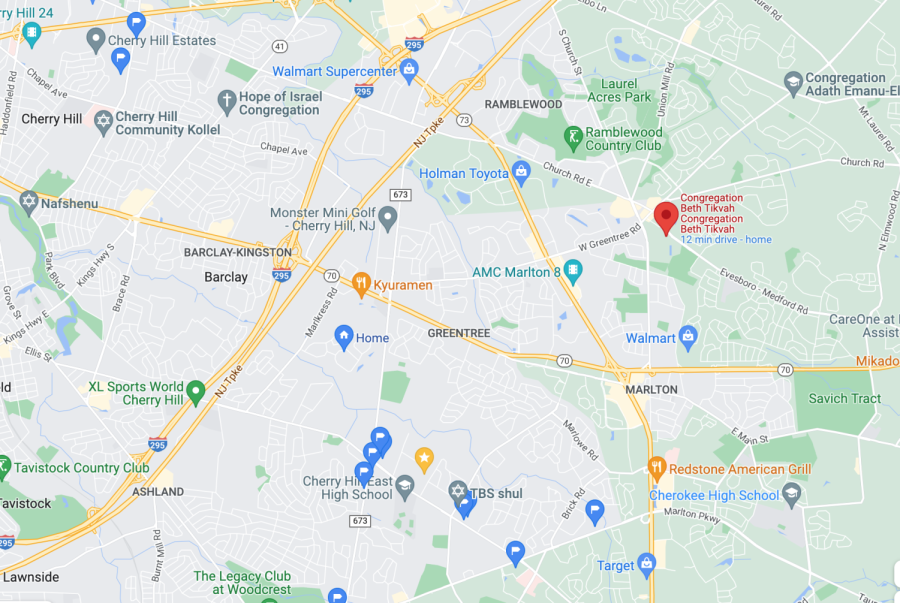 Cherry Hill is heavily influenced by Judaism. (Blue flags represent places for Jews to come together in culture, religion, or community)

In a world where only 0.19 percent of the population worships Judaism, it’s seemingly shocking that 11,000 of these people live in Cherry Hill, New Jersey, and the areas surrounding the town. For years, the area has been home to a significant Jewish population which has truly left a cultural mark.

In comparison to the rest of the world, Cherry Hill is very densely populated in regard to the number of Jewish people who live in the area. This has resulted in a vast number of Jewish centers, synagogues, and other religious and cultural vicinities finding a home in the town.

Just 0.5 miles from Cherry Hill High School East lies the Jewish Community Center, the JCC, which has become a staple of Jewish life in the region. Jewish Community Centers can be found nationwide, and the local building has so many offerings. The updated building was constructed in 1997 and has since been devoted to offering valuable social programs to the community. The JCC is not only the home of the Sari Isdaner Early Childhood Center and plentiful health and wellness facilities but also so many prominent Jewish events throughout the year. The local JCC draws in exciting guest speakers and hosts events that help to enrich the Jewish community.

The growth in the Jewish population in the Cherry Hill region has also culminated in the creation of the JCC Camps at Medford which has been a Jewish staple for children since 1942. The camp offers an enriching experience full of Jewish concepts and activities for children and counselors to develop their knowledge of the religion. Just twenty minutes from Cherry Hill, the JCC Camps at Medford have been forming lasting memories and summers for Jewish children for years.

It’s also remarkable how Judaism has become so widespread in Cherry Hill over a span of so many years that there are so many synagogues in such close proximity to each other. Just across the street from the JCC lies Temple Emanuel on Springdale Road. Temple Emanuel was formed in 1950 and was the first reform Synagogue to be constructed in Cherry Hill. Further down on Evesham Road sits Congregation M’kor Shalom. This synagogue was formed in 1974 as the Jewish community began to blossom. Eighteen families came together to form the congregation which found its place as a liberal synagogue, falling between the lines of reform and conservative. In May of 2021, it was announced that the two synagogues would be merging, but their respective legacies will continue to live on.

Judaism has also spread down Kresson Road, as Temple Beth Shalom and Chabad Lubavitch sit right next to each other. Temple Beth Shalom’s Cherry Hill location has been present since 1989 with over eight hundred families in their conservative congregation. The temple moved to this town as an effect of the Jewish community continuing to heavily populate the area. The Cherry Hill location of the Chabad was opened in 1993, and it is a temple for Orthodox Jews to take part in their worship. The Chabad looks to help Jewish people participate in the Jewish aspects of their lives through learning and prayer.

Similar to Temple Beth Shalom, Congregation Beth El is also a conservative synagogue. The Voorhees temple opened in 1921 as a place to inspire the Jewish community and to provide them with a place of worship. Seeing how long ago Beth El opened in the area, it is illustrated how the Jewish community has been leaving its mark on the region.

It is remarkable how over time, Jewish facilities have spread throughout Cherry Hill so rapidly to keep up with the ever-growing Jewish community in the town. Dating back to the 1900s, there have been Jewish families located all over the region, and their impact can be seen through the many Synagogues and other centers for Judaism that are located in the area. The Jewish people have created a lasting impact on Cherry Hill as their legacy continues to grow.