How is artificial intelligence reshaping the present and future of the art world? 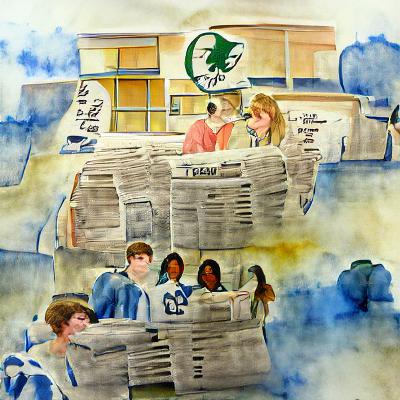 NightCafe Created, an AI-generated art platform, produced this watercolor-style art piece after being given the prompt "Eastside high school newspaper".

Nowadays, it seems that artificial intelligence has become integrated into nearly every aspect of our lives. For many, it has become second nature to call on the help of AI-powered virtual assistants like Amazon Echo and Google Home everyday tasks. Everyday, AI-generated recommendations influence and even dictate our consuming and spending choices, from the products we slip into our online shopping carts to the TV shows and movies we watch. Technology — from artificial intelligence to robots — has advanced to match and overtake human skill in many aspects, from computing power to physical strength. For a long time, society has regarded creativity and artistry to be an exclusively human trait, something that artificial intelligence could not imitate. However, as AI advancements venture further into the artistic arena, it is clear that artificial intelligence will have some role in the future of the art world. But what exactly that role will be has sparked debate and contemplation among artists and computer scientists alike.

You may be surprised to learn that creations by AI “artists” have already hit the art market. In fact, in 2018, the fine art auction house Christie’s sold “Portrait of Edmond de Belamy” — an AI-created print in the style of 18th-century European portraiture — for a whopping $432,500. The sale shocked art connoisseurs around the world because not only was it the first AI-generated original artwork to come on auction, but the portrait had also sold for 43 times its estimated value (which had been $10,000).

“Portrait of Edmond de Belamy” was one of a series of portraits of the fictional Belamy family created by an AI algorithm created by “Obvious”, a Paris-based art collective. “Obvious” had fed thousands of 16th to 20th century European portraits into an algorithm. The algorithm was then able to identify certain techniques commonly used by these portrait artists and replicate them in its own series of paintings. And voila, “Portrait of Edmond de Belamy” was born. The process that “Obvious” used to train its algorithm is known as machine learning — the foundation upon which most AI algorithms are structured.

In other machine learning projects, scientists have developed AI algorithms that can create anything from music to poetry. For example, researchers at the University of Toronto and IBM were able to build an algorithm that learned to write its own Shakespearean-style poetry after being given a training set of 3,000 sonnets to process. On another occasion, scientists developed an AI — called the Deep Artificial Composer (DAC) — that was capable of generating melodies consistent with the style of the training data it received.

For example, after being given a data set of Irish folk melodies, DAC was able to “learn” to create a melody in the same style. Furthermore, in most studies, when presented with an AI-create music or art piece, people were frequently unable to tell the difference between which one had been AI-generated and which one had not.

However, you don’t have to be a computer scientist to experiment with AI-generated art. Through online platforms and mobile apps such as NightCafe and WOMBO Dream, users simply have to enter some words and phrases as prompts and select an art style in order to see their ideas turned into an AI-generated art piece.

It is undeniable that artificial intelligence is capable of creating images that are aesthetically pleasing and beautiful. But whether or not AI is capable of replicating humans’ creative process is another matter. Even a baby may be able to press out a random, yet pleasant sequence of notes at a piano, but this is not meaningful nor creative — it is not art. Ultimately, even if the products of human artists and AI artists are essentially indistinguishable, there still exists a creative process and sense of agency in human artists that is lacking in AI.

Thus, it’s probably safe to assume that artificial intelligence won’t become the world’s next Van Gogh or Monet anytime soon. Society still craves to know the individuals, the people behind the art they consume in their daily lives.

It seems much more likely that artists of the future and even the present will forge a partnership with AI to create their pieces. To put it in other words, AI can act as an extension of human creativity and a way to augment our artistic skills.

For example, artist Sougwen Chung collaborates with robots to create beautiful pieces of art. Chung often works with one to several robot arms or with multiple robotic painting units to create stunning paintings. As they work, the robots read Chung’s lines, either through an overhead camera or a sensor on the tip of her brush that records her positional data.

Using machine learning, the robot processes and “learns” Chung’s art style to mimic it while painting alongside her. Currently, Chung is also working further forging connections between the robots and her creativity by weaving in data from her own biometrics, such as her heart rate and brain waves.

Rest assured, the development of AI seems to be much more an evolution for the art world rather than an end. Artificial intelligence has strengthened human skills in a multitude of other careers and aspects of life, so why not art?