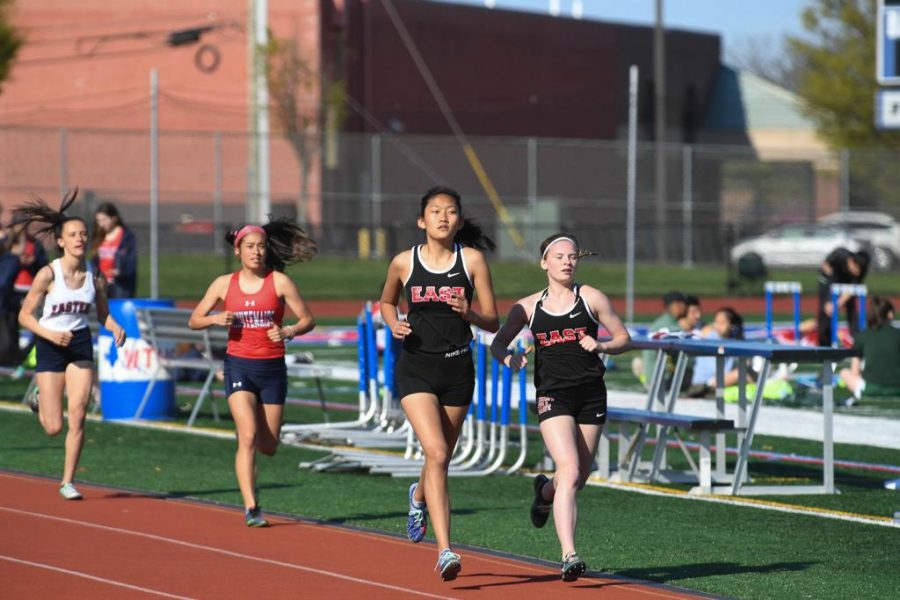 East Girls’ Track runners face off in a race.

Throughout the years, Cherry Hill East has consistently had a competitive track program for both the boys and the girls team. The girls track team and coach Yanell Holiday entered the 2019 season confident. The team possesses great senior leadership from Dani Lazarus (‘19), Georgetown track commit Maya Drayton (‘19) and Boston College cross country and track and field commit Sarah Pierce. With these girls leading the way and the team having many underclassmen with great potential, the girls had high expectations for the season.

“I think [the season has] been outstanding. We’ve been performing like I anticipated.We’re always a force. A team you can’t take for granted,” said Holliday.

The Cougars currently are number one in South Jersey in the distance medley thanks to great performances from Pierce and underclassmen Elliana Tonghini (‘22) MaryKate McCurdy (‘21) and Zeyonna Davis (‘21) at the Rowan University Open. McCurdy also won the 1600 meter race at the Camden County Championships and Pierce came in second. The Cougars came in fifth overall place at the meet, a mark that is very hard to reach. The Cougars have many goals they hope to achieve before the season ends.

Drayton said, “The season has gone by super fast so far and the bigger, important meets are coming up pretty soon. We have a lot of new people and new faces on the track team that have become a major role and asset on the team.”

In addition, the field team has also had a lot of success this season. The team is very yong, which is a positive for them moving forward. Key members have been Aliyah Anderson (‘19) and Paloma McNurty (‘19), along with a plethora of underclassmen.

“For me personally, it would be accomplishing if I set a new personal record in the high jump and cleared 5’2 because I have been consistently jumping 5 feet since winter season. For my running events and my relays, I want to decrease my time as much as possible,” said Aliyah Anderson (‘19).

Overall, the track and field team hopes to succeed in the final few laps of the season.