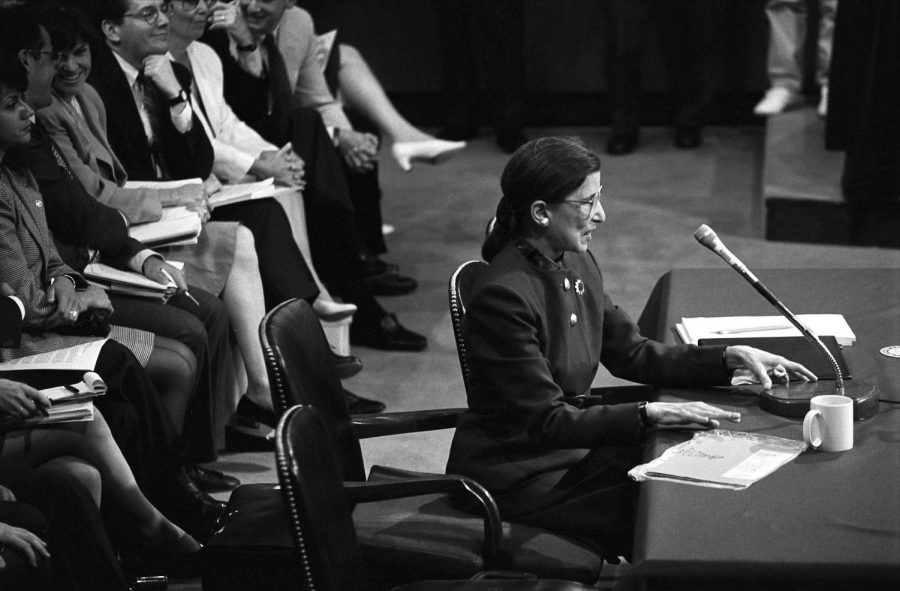 Ruth Bader Ginsburg at her Supreme Court hearing in 1993.

With her cool intelligence, diligent work, and perseverance, Ginsburg continues to inspire feminists in America. Her passion for dismantling sexism and fighting for women’s rights coined her the nickname, Notorious RBG.

Ruth Bader Ginsburg had been a feminist icon even before her distinguished career in the Supreme Court. The rights women possess nowadays would be lacking if it weren’t for her work.

Prior to entering the Supreme Court as the second female justice, she also faced macro and micro aggressions. As a woman who had the ambitions of becoming a lawyer, Ginsburg strived for academic excellence and entered Harvard Law school as one out of nine total female undergraduates. When she arrived, the dean questioned why she had taken a spot from a male.

Although she faced inequality along the way, she earned outstanding grades. When her cancer-patient husband could not attend his classes, she helped with his course and class work, all the while watching their young daughter. It is this determination and grit Ginsburg possessed that inspires so many people in and outside America.

She later worked at Rutgers Law School, yet she faced unequal pay compared to her male colleagues. After joining an equal pay campaign with other female teachers, their salaries increased. Ginsburg fought for her beliefs, and strived for equality.

Ginsburg’s work has also improved women’s reproductive rights and opportunities in the workplace. She won five major cases which gave women in America the rights they possess nowadays.

Without her, women would not be admitted into state funded schools, be required to attend juries, or become financially independent.Ginsburg also fought for female representation in law and financial independence apart from men. Her work led to the Equal Opportunity Act, which prevents discrimination based on factors outside of creditworthiness, and allowed women to open credit cards and funds without a male co-signer. As the co-founder of the American Civil Liberty Union’s Women’s Project, she also pushed for women’s rights including education and employment.

Although Ginsburg faced gender discrimination at every turn throughout her career, she used her experiences to fight for women’s rights and equality throughout America.

One thing is for sure, Ginsburg’s legacy will continue to live on and encourage feminists around the world.