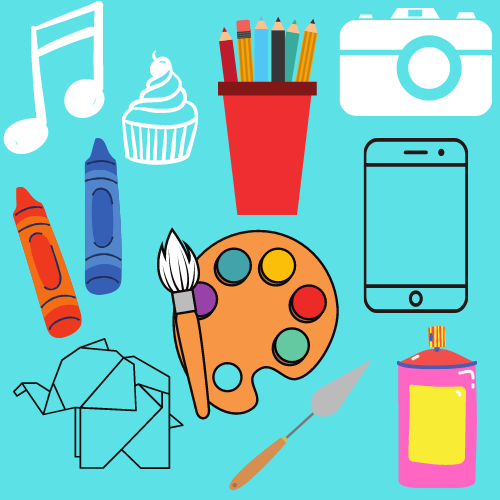 Art comes in many different forms.

Visual art can be manifested in a surprising number of ways. There’s the obvious painting, drawing, digital art, and sculpting, but visual art also entails photography, film-making, design, animation, architecture, and much more. They are the products of an ongoing evolution in which the meaning of art and modes of expressing it have changed.

Firstly, in terms of painting, drawing, and digital art, they all share the commonality of utilizing a utensil to sketch and portray a 2D image. For painting, this is with a paintbrush, paint, and a canvas. It is a large umbrella of many subcategories that fit into “painting”—watercolor, acrylic, oil, gouache, and even spray painting. If you do it often, painting can be quite pricey; each type of paint needs its own paper or canvas, as well as specific brushes (sorted according to fur) and a palette. This is not to mention that you need to buy the actual paint, too. Working with oils means you must pay for a lot of extra supplies, including turpentine, linseed oil, and a knife.

Drawing is a lot simpler in terms of supplies. Since it doesn’t cost much, it’s one of the most popular forms of visual art. However, looking past the HB-Ticonderoga-pencil math-homework drawings, many artists use shading pencils, charcoal, or colored pencils to draw. Styles of drawing include line drawing, pointillism, photorealism, and much more. They are all difficult and laborious in their own ways.

Digital art, like creating a film from Video8 to Digital, has grown in popularity and accessibility in the 21st century. Today, all you need is an art software to draw. There are many free ones, like MediBang Paint, ibis Paint X, and FireAlpaca. However, other programs cost money to download or have features that cost money, like Photoshop, Clip Studio Paint, and Procreate. These programs come with a variety of brushes that you can use to paint on a blank canvas.

Most people prefer drawing with a finger or a pen on a touchscreen device (for example, an iPad) or using a drawing tablet (like a Wacom) that connects directly to a desktop computer screen. Something unique that comes with digital painting is layers. It’s a great way to organize your work and you can toggle them on or off. The only downside to layering is the pure, unadulterated pain one experiences upon realizing they must flip through dozens of layers to clean or erase something. But if you can organize it, that doesn’t even count as a problem.

Animation is similar to digital art in that it is done digitally. 3D animation, in particular, has grown immensely in popularity and technique. The most popular software for 3D animation are Maya, ZBrush, and Blender—which is free, and a blessing from heaven. 3D animation makes objects look 3D because, in the animation workspaces, they’re actual 3D objects that are formed in different ways, like molding and sculpting. By rigging these objects with things called armature (which are like bones, or the strings of a puppet), you can put these objects at different positions and animate them. 3D animation is notoriously difficult to learn.

On the other hand, 2D animation has been around for longer and works with frames. Compared to 3D animation, it is less mechanical. While many studios like Disney and Pixar lean a lot more towards 3D animation today, 2D carries its own charm. For example, there is Earwig and the Witch (Studio Ghibli).

Film-making is a little different. It is also considered visual art because it’s a visual form by which a subject matter—in this case, we’re talking more series of events—is expressed. In both live-action and animation films, ideas can be conveyed in creative ways through color and music.

Photography counts as well. It is surprising how much emotion one photo can convey. What’s that old saying again—a picture says a thousand words? Photography does it. Obviously, the type of camera and the photo-editing afterward matters just as much. Between a photo shot on an iPhone and the same scene caught by a camera meant for photography, which is going to hit more?

I could go on and on. As you can see, at the end of the day, visual art is based on visual expression. Although it may seem like many of these forms come down to the supplies you’re working with, what matters, even more, is skill. It’s like comparing natural talent and effort in sports. Skill is developed through tons of practice, and skill is the ability to deliver impact efficiently. It is expression done well.