“At the end of the day, STEM education is not always a monetary priority for the schools who just don’t have enough to support more than the standard curriculum.” (Barbara Armstrong ('25) )

“At the end of the day, STEM education is not always a monetary priority for the schools who just don’t have enough to support more than the standard curriculum.”

This package explores the nuisances of STEM education – the drawbacks and the benefits. We take a cumulative look at the evolution of STEM education, including the history of these subjects in the US, the implementation of these practices, and the effect of this education method on the women’s empowerment movement. Currently, STEM education propels 69% of the American GDP.

What is STEM education?

“As a philosophy, STEM is meant to create a program that integrates all four disciplines in a way that forces the student to use cross-disciplinary knowledge to solve problems,” writes Wyatt Dalton, a driven Tech entrepreneur.

Many people know what STEM is but don’t know anything past the catchy acronym.

As a relatively new term coined by the National Science Foundation in the early 2000s, STEM stands for science, technology, engineering, and mathematics.

“As a philosophy, STEM is meant to create a program that integrates all four disciplines in a way that forces the student to use cross-disciplinary knowledge to solve problems,” writes Wyatt Dalton, a driven Tech entrepreneur.

The courses generally present in STEM fields force a student to have an extraordinarily hands-on and conceptual understanding of the subject material. As opposed to the traditional learning style many utilize —typically some form of recitation and memorization of information—is pretty much out the window.

Very rarely, in STEM subjects, will someone be given the definitive solution to a problem. Instead, a student will be required to use their learned knowledge to find the answer – this is the beauty of STEM. It diverges from the traditional recitation, repetition, and regurgitation curriculum, promoting creativity, flexible thinking, technical knowledge, and mastery of the subject discipline.

Emphasis on science and technology education emerged after the Russian satellite Sputnik launched in 1957. Many Americans at the time felt that STEM education would be crucial when competing in the global arena.

President Dwight Eisenhower said, “The Soviet Union now has a greater number than the United States in the combined category of scientists and engineers. And it is producing graduates in these fields at a much faster rate. We need scientists in the ten years ahead.”

Shortly after, in 1958, the National Aeronautics and Space Administration (NASA) was founded. NASA’s creation helped organize the nation’s science programs and served as the leader of the country’s push for robust science, technology, engineering, and mathematics education and awareness. The American attention to space and engineering motivated more students to pursue the relevant fields.

In 2009, the Obama administration announced the “Educate to Innovate” campaign to motivate and inspire students to excel in STEM subjects. In addition to addressing the inadequate number of teachers skilled in teaching these subjects.

In 2020, the U.S. Department of Education awarded $141 million in new grants and $437 million to continue existing STEM projects.

Today, STEM supports two-thirds of U.S. jobs (67%), 69of U.S. GDP, and $2.3 trillion in annual federal tax revenue, according to the FTI analysis “STEM and the American Workforce.”

Suffice to say, STEM sectors are ever-growing in the world’s economies, and the need for accessible and equitable distribution of resources needed to foster STEM education is essential in today’s economic and political climate.

How is STEM blended learning broken up through K-12 education? 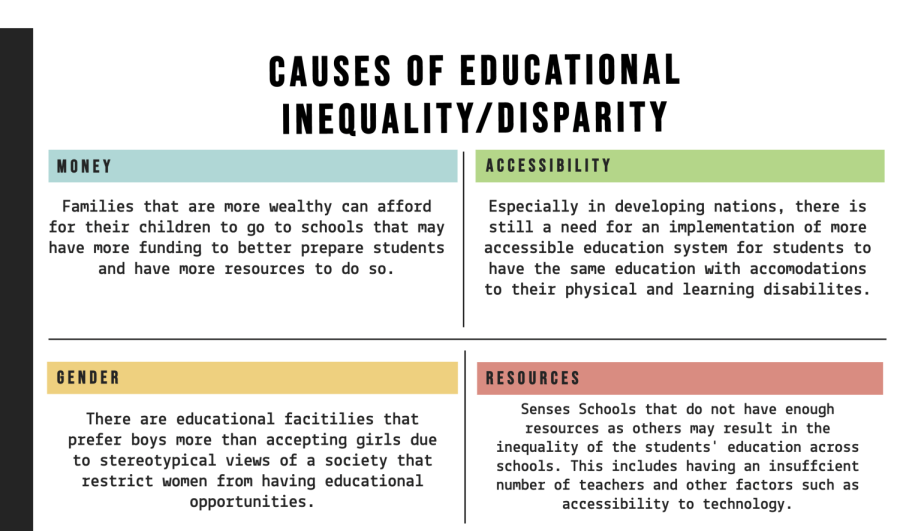 “At the end of the day, STEM education is not always a monetary priority for the schools who just don’t have enough to support more than the standard curriculum.”

Although much of the American public tends to assert that institutions of racial discrimination have been torn down, these institutions have left a bloody mark on the nation that leaves minority groups disadvantaged to this day. This idea is especially apparent in the field of education, a sector crucially important to invest in to help reduce wealth inequality.

As the nation modernized during the 1900s, population growth skyrocketed and housing development became an explosive market. New urban and suburban communities sprung up all around the country, and families wished to move into these newer homes to live what has often been deemed the American Dream.

However, the bank industry made it practically impossible for minorities to enter into these new communities of investment. When the average person seeks to purchase a home, they must take out loans from their bank so that they can slowly pay off the expense of the house rather than paying a large sum of money at one moment. In a practice known as “redlining”, banks would look at maps of an area and label communities “desirable”, “declining”, or “hazardous”. Depending on what area a person lived in, they would be offered different rates of credit or none at all.

The striking issue with this practice is the way it targeted minority groups. Communities primarily consisting of Black Americans were the ones deemed “hazardous” in this practice, which gave them no chance to rise economically and socially in the hostile environment of the 1900s.

The impact of this system has left thousands of minorities in inner city communities disadvantaged to this day.

This brings us to the issue of education. In most places throughout the US, public schools are funded through property taxes. This means that in poorer areas, less money is afforded to the public school system. At the end of the day, STEM education is not always a monetary priority for the schools who just don’t have enough to support more than the standard curriculum. 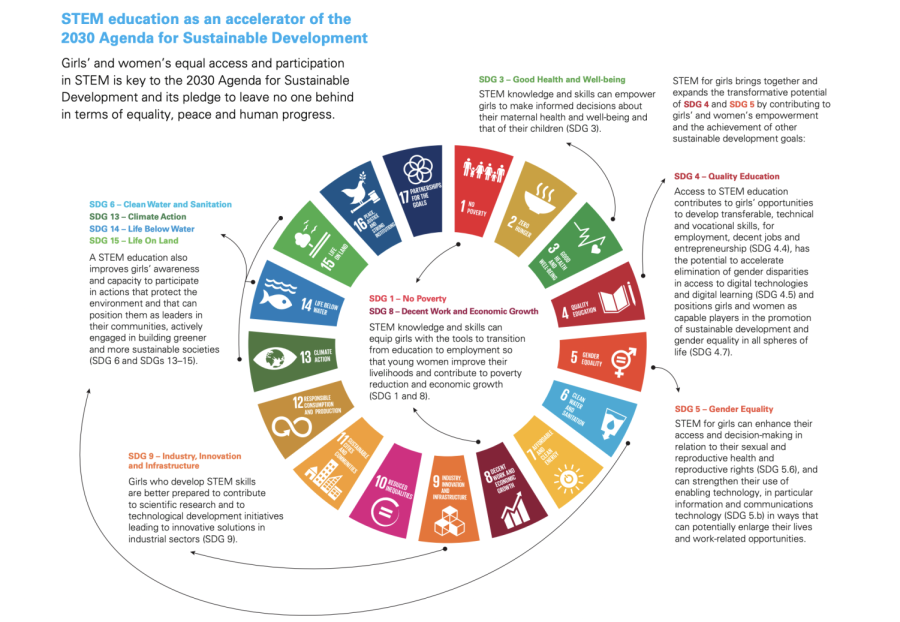 Courtesy of the United Nations

“STEM education [is] an accelerator of the 2030 Agenda for Sustainable Development Girls’ and women’s equal access and participation in STEM is key to the 2030 Agenda for Sustainable Development and its pledge to leave no one behind in terms of equality, peace and human progress,” read a statement released from the United Nation report; “Reimagining Girl’s Education through STEM”

The study of STEM (science, technology, engineering, and math) has been the driving force behind much of the world’s discoveries and advancements throughout history. These disciplines have allowed doctors to develop cures for diseases, put astronauts on the moon, reveal the inner workings of the human body, and connect the world via the Internet. Without a doubt, teaching students STEM plays a crucial role in nurturing a new generation of innovators, inventors, and problem solvers.

Today, the demand for jobs in STEM fields is rapidly increasing: according to the Pew Research Center, STEM employment in the U.S. has risen from 9.7 million to 17.3 million since 1990 — expanding by a whopping 79% and outpacing overall employment growth. In fact, employment in the computer science sector has more than quadrupled since the 90s (a 338% increase) and that of the healthcare industry has nearly doubled (a 92% increase).

However, the supply of ready workers to fill such positions lags behind. For example, a 2018 White House report titled “Charting a Course for Success: America’s Strategy for STEM Education” found that only 20% of college-bound high schoolers were ready for courses typically required for a STEM major. Simply put, the growth of the STEM workforce is surpassing the output of the education system that sustains it.

Bridging the gap between the supply and demand for STEM workers can start with K-12 education, especially at the high school level, since a student’s access to an advanced STEM curriculum plays a direct role in their decision to pursue STEM or a STEM-related discipline in higher education. For example, a 2013 study published in American Educational Research Journal found that minority students heavily consider success in advanced math classes as a factor when deciding whether to study STEM in the future.

Furthermore, STEM education not only equips students with crucial skills to support today’s ever-growing STEM workforce, but also prepares them with interdisciplinary skills such as problem solving, creative thinking, and communication.

Former First Lady Eleanor Roosevelt once said, “I think, at a child’s birth, if a mother could ask a fairy godmother to endow it with the most useful gift, that gift should be curiosity.” Our world may not have fairy godmothers to do such a job, but we do, however, have schools. By developing an effective STEM education system, schools can instill qualities such as curiosity and inquisitiveness within the world’s youth — qualities that will help them go far in life, in STEM and beyond.

Evolution of STEM education in the US

Courtesy of the New York Times

STEM education provides rich opportunities for forming a self-image of being capable, resourceful, and able to contribute to solving important problems

As the world readies itself for the 4th Industrial Revolution, America alone will need to fill 3.5 million STEM jobs by 2025. According to the Bureau of labor statistics, It is estimated that the STEM industry will grow by 8.8%. So, it is empirical that we include every individual in the conversation– we cannot discuss STEM education, its effects, and implications without including the gender equity narrative – young women play a crucial role in advancing this technological revolution. STEM education is a tool to reach gender parity.

The United Nations report titled “Reimagining Girl’s Education through STEM” explains that “STEM education provides rich opportunities for forming a self-image of being capable, resourceful, and able to contribute to solving important problems.” Currently, traditional employment sectors are declining in response to automation, while innovation creates new ones demanding different skills. Without STEM skills – critical thinking, problem-solving and digital skills – girls and women will be further left behind in equal economic and social participation.

In a report published by the European Institute for Gender Equality (EIGE), closing the gender gap in STEM could lead to an additional 1.2 million jobs and, in monetary terms, improve GDP by $646 – $869 billion in 2050.

The report further explains that sharing positive messages with girls about STEM education abilities is critical from early childhood through adolescence – by parents and teachers, especially. Exposure to female representation and the same opportunities as their male counterparts, from their toys to tv shows, can influence gender socialization, disrupting harmful gender norms that foster doubt in competence and low self-esteem. Furthermore, if secondary schools and colleges can actively promote girls’ access to STEM studies, these norms could start to disappear.

Gender norms and gender stereotypes pose significant limitations to STEM motivation and engagement. Traditional gender roles that pertain to femininity are still prevalent. So, we must expose young girls to complex nuisances that foster curiosity. In addition, gender stereotypes that STEM studies and careers are for boys negatively affect girls’ interests, aspirations, engagement, and achievement in STEM. Caregivers and teachers often reinforce the notion that boys are better at science and mathematics than girls. Moreover, the curriculum and learning materials can reinforce gender stereotypes and unequal gender norms in STEM. This barrier of inherent and subconscious stereotyping becomes circular, with images of boys and men dominating STEM-related play, study, and work to appeal to boys, thereby discouraging girls from aspiring to it.

Similarly, the underrepresentation of women in STEM fields significantly causes a decrease in women entering, studying, and pursuing these fields. Now more than ever, we need to include women in this growing field. Increasing girls’ participation in STEM careers can close the gender pay gap and boost women’s cumulative earnings by $299 billion over the next ten years, expediting global economic development. We must work towards including women to reap the rewards of the 4th Industrial Revolution and achieve parity.

Who is in the STEM learning ecosystem?

Exploring STEM and the American workforce