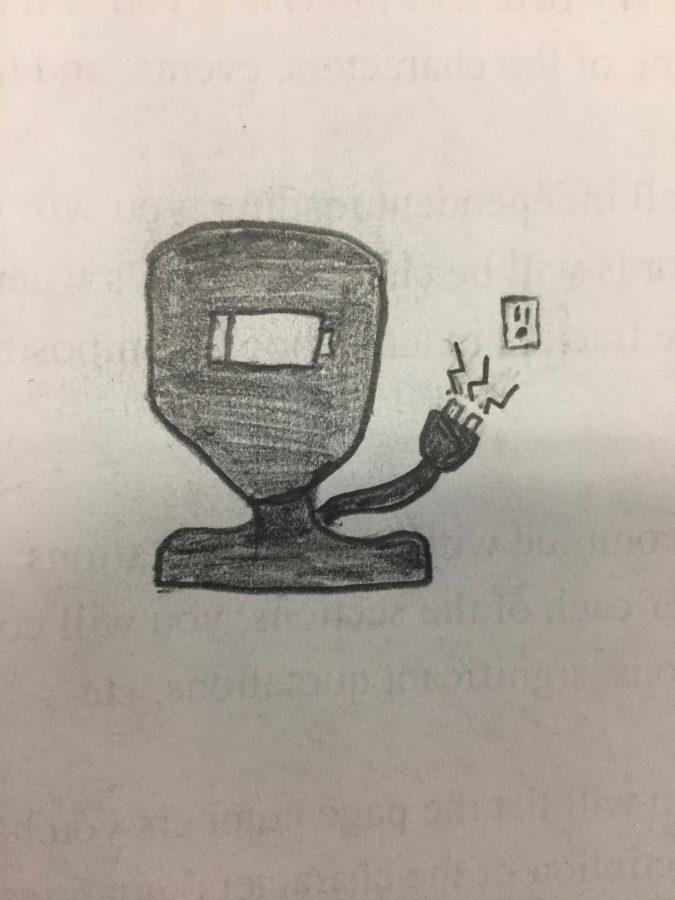 The things that damage us the most are the normal things in life. It’s the things we don’t think about, the regular parts of our lives; they’re the ones that affect us the most. Things like eating or sleeping or breathing are supposed to be second nature, but if you overthink what they are, your so-called “natural instincts” become the core of your life in the worst way possible.

I never gave a second thought about food until I was looking for control. I’m in love with my work outside of school, and I never want to let myself get lazy, even though it always ends up that way. In the midsummer of 2018, I decided to get rid of my lazy habits once and for all — less breaks, more productivity, more focus on what I cared about. I wouldn’t let myself even eat until I got something worthwhile done. I didn’t care about my body; I just wanted to be a better worker so I could be proud of myself. Once I needed to be better, my body image changed in seconds.

People tell me I’m lucky for being as naturally skinny as I am, and I never used to have a reason to disagree with them. The thing is, once you start overthinking what you look like, you can’t see what everybody else sees; your mind distorts the truth. I knew I was skinny, I knew I was underweight as it was, but I could never get myself to see it. And if I see myself as an issue, I have to fix it.

The process began before I even realized what was happening. I was suddenly aware of everything I ate and I felt helpless for not knowing what I ate in a day. To fix this, I started keeping track of everything I ate and how many calories each item had. A standard diet has around 2,000 calories per day, so it’s normal for the foods you eat to have a few hundred calories each. I knew high numbers were standard, but they looked so much bigger on paper than they really were. I wanted the numbers to be smaller, small enough to fit in my hand so I could hold onto them tightly, and then I could squeeze them even smaller. After a month of “training,” I was eating around 500 calories a day, a fourth of what I should have been. In my eyes, this was a success.

Of course, it didn’t take long for the catch of the plan to kick in. When you start to starve yourself, you feel very acute pains in your stomach called hunger pangs. I was no stranger to these pains for the first week of starvation, where I was eating no more than 200 calories a day. The growing levels of pain and the temptation of food all around me made me cave in to eating slightly more than before. The feeling of food was a wave of comfort, but everything I ate felt like it was weighing me down.

This cycle lasted for five months with no breaks. I couldn’t focus in school. I was always tired no matter how much sleep I got. The pressure of eating made me feel like less valuable as a person. I was drowning in my own thoughts — “You have to be empty,” “This will fix you” — I was screaming in my head because I knew how bad I was, but I would never let myself realize it. But I kept going.

I don’t know why I didn’t quit after so long. I was faced with a decision: I would have to start shutting down or I would have to stop the cycle. The more I thought about this, the more I realized how hungry I really was when I didn’t try to hide it. This void in my core was swallowing me whole to fill itself because I wouldn’t. Out of desperation, this instinct to let myself be at ease from all the pain, I let myself fill the void.

At the time, my metabolism was so broken that as much as a snack felt like a meal to me, and the weight of the guilt that came with it was enough to tie me over. For the next month, I let myself confide in a few close friends to help me replace the guilt with the food I needed to get by. The process was slow and much more mentally painful than starving was physically painful, but it was what I needed to survive and get better.

Not telling an adult or an authority figure was very hard and definitely made the process worse than it had to be. I was scared that my parents would have to know and they would respond the wrong way, so I closed myself off. I was one of the lucky ones, because I had friends that forced me to eat when I didn’t want to, and I had a conversation with myself when I knew it was time to change my fix into something that would really help me.

To this day, I find myself not eating as much as I should, and it’s still my New Year’s resolution to weigh over 100 pounds, but I don’t let those days define how the ones after it need to be. It took a very long time, but I slowly started to gain a realistic perspective of myself and what I should be eating, and that perspective helped me not to care as much about what I ate. I no longer keep track of calories or lists of foods I eat, and hopefully I won’t do it again. If all goes well, I’ll remember my experience and not go back in a search of control where it didn’t exist, because dieting was never a form of control in the first place; this whole thing was founded on beliefs that didn’t even exist.

Every day I step into is a new one with new challenges to face, but if I step forward on the same track I’m on, things will start to be brighter. I just know it.