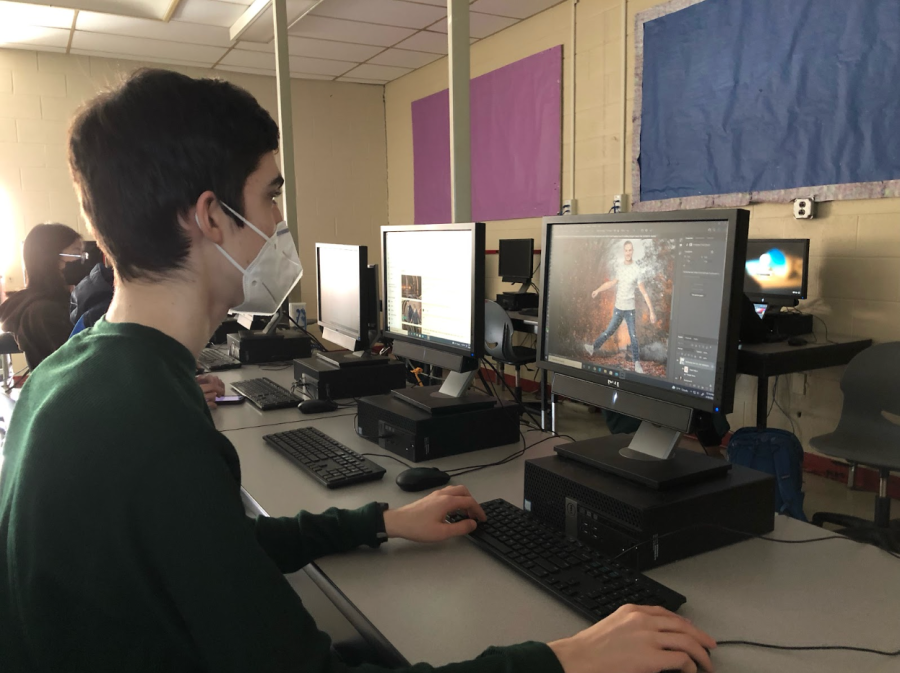 Max Green(‘23) works on touching up a photo during his Block H Computer Graphics class.

When someone says art, many peoples’ minds would automatically imagine a paint brush stroking a blank canvas or a drawing pencil making contact with sketchbook paper. However, art branches out to so much more than just the traditional forms of art. Digital art has been making its ways into individuals’ everyday lives and proves to be applicable in daily life, especially in F083, the Computer Graphics class at Cherry Hill East.
“The course has a very relaxed environment, but everyone is still being productive and learning new things,” said Max Green (‘23).

Green is taking Advanced Computer Graphics this school year. He did not have the chance to take the introductory course, but he enjoys working with Photoshop and learning how to use it in class. Some of the things that Green and his classmates have done include animation, pop-art, light streaks, and touching up photos, whether that would be making small specific changes or bigger changes. Green has just finished editing a vintage photo, which was a tilted picture taken of a printed photo. It had a crease on the picture, and the class was also told to remove one of the people in the picture.

“[Ms. Hird] is one of my favorite teachers if I am being honest.” said Green, “she especially ensures that the ones who are actively participating and engaged learn things and succeed in her course.”

On a scale from 1-10, Green rated the class a 9. In any class, a teacher has a huge impact on the students and their engagement in the class. Green describes the atmosphere as laid back and stress-free with all three levels of Computer Graphics – made up of 22 other students– in the same room. Ms. Hird, the Computer Graphics teacher, shows everyone how to do a certain task, which could be the class following short direction and having more freedom with the task, or her students following along with what she is doing in the front of the class.

“Generally, we are either given a prompt or something specific to work on and make specified changes to that,” said Green.

He not only loves the teacher, but also the way she delivers instruction, and he appreciates how he can learn about Photoshop. Green feels that it is useful to know how to use the program in the real world, as it is used a lot in the professional world of digital art.

“Just the fact that we are able to use it and learn to use some of its most important features is a really good thing,” said Green.

Regarding Green’s senior year, he is considering taking the next level of Computer Graphics. He took the course this year to fill his art requirement, but has discovered that it is a very fun class. He decided the summer going into his junior year that it was a class worth trying.

As a current junior, the opportunity for him to take Advanced Applications of Computer Graphics is on the table. If Green happened to have a half-year course that he needed to fill, the class would be his top choice to fill that very spot.

Use the slider to see the edits Green made to a vintage photo! His assignment was to remove the crease in the photo as well as remove one of the people in the picture.