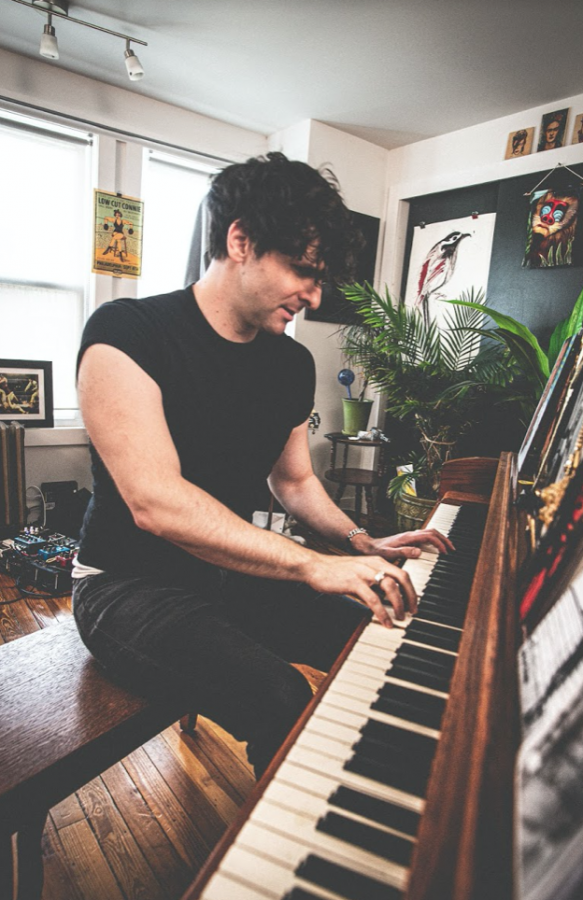 Weiner performs on “Tough Cookies,” his liveshow, before the Inaugural event.

With notable fans and countless inspirational highlights –– Cherry Hill East alum, Adam Weiner (‘98), who is only just beginning his journey, electrifies a powerful career. Encompassing his progressive Cherry Hill past of humanitarian and social justice values, combined with his love for performing, Weiner brimmed with success. Most recently, he and his band, Low Cut Connie, headlined President Biden’s “Home State Inauguration Event,” a virtual ball-equivalent program from the Pennsylvania and Delaware Democratic Parties.

“Lightning struck twice,” said Adam Weiner, who had already been to the White House in 2016 to meet President Obama after his song, “Boozophilia,” was placed on the first of Obama’s annual Summer Spotify playlists; a playlist that featured internationally-known artists and historical literary champions like Stevie Wonder, Aretha Franklin, Bob Dylan, and The Rolling Stones, now spotlighted the then “no-name band,” Low Cut Connie.

One day in 2020, when Weiner was doing “Tough Cookies”, the live stream series he started at the beginning of the pandemic to keep people’s spirits elevated and give some type of normalcy in live entertainment, Weiner was contacted by Joe Biden’s team who fervently enjoyed watching his live cast.

“On one broadcast I aired this commercial I had made called ‘Don’t be a Shmuck, Go Vote,’ which [the Biden team] liked and asked to use,” said Weiner, who then partnered and cooperated with the Biden team, as well as another voter-advocacy organization, in a voting-push initiative. Additionally, Biden, before the election, reached out and thanked the band, writing that he wants to see Low Cut Connie live when it is safe again –– prompting Weiner’s band to headline one of the Inauguration Day celebrations.

“My music and my performances have never been actively political,” said Weiner. “Over the past few years, my fan base grew and grew, and I have had the pleasure of traveling all over America… meeting people [of all looks, sexual orientations, and from all different demographic backgrounds] and [because of this, I have] become more engaged and learned a lot about this country and the people who live here. I felt it was important for me, especially because I had a captive audience, to do my part to sort of steer the country back onto a better path and away from the hate, [bigotry], and violence I was witnessing here in Philadelphia and seeing all over America.”

Back when Weiner’s musical performances were limited to D-Wing at East, Weiner took part in all of East’s plays, Battle of the Bands, talent shows, photography, East chorus, the Rotary Retreat, East’s Poetry Group, and served as the President of Thespian Society. In 1996, Weiner and his friend founded Cherry Hill East’s Gay-Straight Alliance –– one of the first GSA unions in New Jersey.

After graduating from East in 1998, Weiner went to the Tisch School of the Arts at New York University and took part in the Experimental Theatre Wing Program because he felt strongly about performing arts and acting. However, he soon realized that music and rock-and-roll were more of his calling than acting and Shakespeare.

Within the first weeks of his time in New York, Weiner got a job at a restaurant to play piano and perform, and this side-hustle soon spread to him playing piano at several bars and restaurants in the City that Never Sleeps. Weiner worked his talents hard and reached no success, but in 2010, with a group of friends, Weiner formed Low Cut Connie, and after persevering through the hate and disinterest –– it took off.

“This was a real turn of events because I had been trying so hard for so many years to have success as a performer, but it was not really happening. I had started to downshift on my passion –– I got a teaching job and moved around a lot –– but just as I let go a little, my new project, Low Cut Connie, had exploded and changed my life,” he said.

Low Cut Connie has grown from a band to essentially a solo project for Weiner since takeoff. The band has shifted gears, expanded, and has been characterized by a diverse rotating cast of performers by Weiner’s side.

Four years ago, Elton John became interested in the band –– which soon led him to play some of Weiner’s songs on his radio show, call Weiner, and just when Weiner thought that was the end of their relationship, Elton John came to Philadelphia to perform –– inviting Weiner backstage to spend time together and dedicating a song to him on the mainstage.

“There has always been a lot of wonderful music coming out of Philadelphia –– ever since I could remember –– and there is a band that I love at the moment –– so much –– called Low Cut Connie –– who is also from Philadelphia –– and I would like to dedicate this song to them right now because I love them very much,” said John at a 2018 performance at the Wells Fargo Center in Philadelphia.

Hearing John promote Low Cut Connie’s music was a “you’ve made it” moment for Weiner. “I grew up with Elton John’s music –– emulating his piano, his vocals, his humor, and his fearless performance style,” said Weiner. “To have one of my heroes reach out to me –– it was really special.”

Additionally, at the beginning of the pandemic, when Weiner started his episodic and un-scripted live stream series, he received an assortment of videos and photographs of people at home, isolated Covid-patients, ICU nurses, and medical professionals in Philadelphia and New Jersey –– who were all suffering from the pandemic firsthand –– watching, dancing, and enjoying his show.

Weiner, who says he was never known as the best singer, persisted through the negativity to become an internationally-known artist who is listened to around the world. Combined with his passion and showman skills, Weiner learned to perform and create the best entertainment for all to listen to; taking his memorable experiences with him as he continues to create music and inspire many.