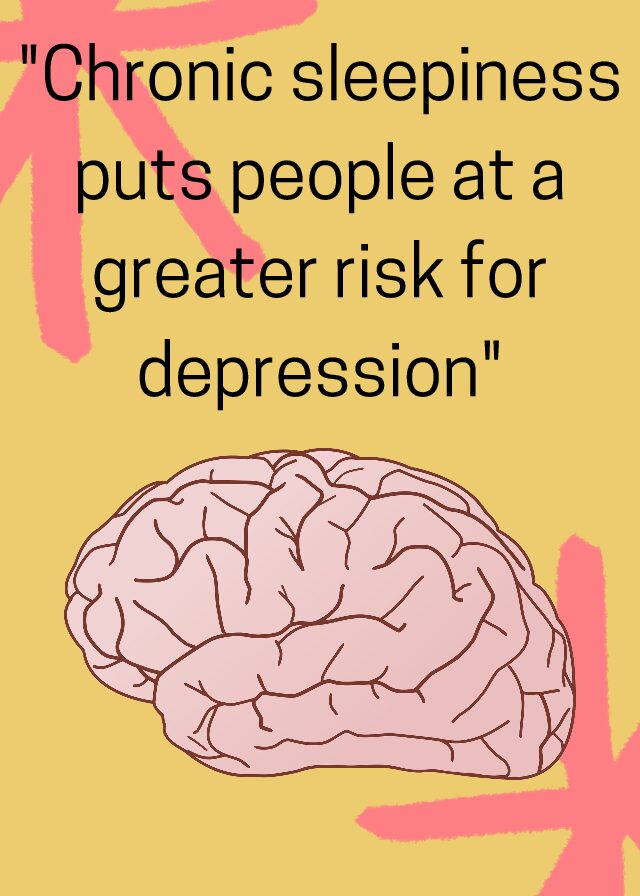 According to the American Academy of Sleep Medicine, teenagers who are 13-18 years old should get eight to ten hours of sleep each night. However, getting this set amount of sleep each night is unattainable for many high school students because of their early school start time. According to a national sample by the CDC, about seven out of ten high school students do not get enough sleep on school nights. Lack of sleep is harmful, as it contributes to mood problems which can lead to anger and depression.

A lack of sleep has many detrimental side effects, including the toll it can take on mental health. Chronic sleepiness puts people at a greater risk for depression.
Avelino Verceles, assistant professor at the University of Maryland’s School of Medicine said, “Sleep and mood affect each other. It’s not uncommon for people who don’t get enough sleep to be depressed or for people who are depressed to not sleep well enough.” A lack of sleep can cause one to feel irritable momentarily, and also can cause many long-term consequences such as depression.

In the fall of 2016, 18 public high schools in Seattle switched their start times from 7:50 a.m. to 8:45 a.m., almost an hour later. After the school start time was pushed back, it was reported that there was a median increase of 34 minutes of sleep for students each night. The later start time corresponded with better academic performance in a biology class. Students’ final grades were 4.5 percent higher for students who took the class with the later start time, compared to students who took the class when school started at 7:50 a.m. When students are successful, they typically feel happier and confident. This causes students to feel more inclined to achieve their goals.

According to Gideon Dunster, a UW doctoral student in biology, “All of the studies of adolescent sleep patterns in the United States are showing that the time at which teens generally fall asleep is biologically determined – but the time at which they wake up is socially determined. This has severe consequences for health and well-being, because disrupted circadian rhythms can adversely affect digestion, heart rate, body temperature, immune system function, attention span and mental health.” These changes can all lead to a decline in one’s mental health.

The research does not lie. When high school students get the appropriate amount of sleep, they are more energized and prepared to start their day. A sufficient amount of sleep contributes to a student’s mental health and overall well-being. Even though it feels unobtainable for many high school students to get enough sleep because of their early school start times, hectic schedules and after school activities, it is important to be aware of the effects that a lack of sleep has on one’s mind.