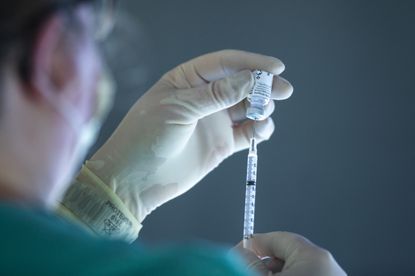 Courtesy of the Chicago Tribune

The government and vaccines are hardly ever a calm topic in our country, but recently they have become absolutely a firebrand. Determined international efforts to discover and produce a vaccine to combat the COVID-19 have been underway since the WHO declared the disease a pandemic in March of 2020. In December of the same year, distribution began for the earliest COVID-19 vaccines. Yet as vaccine rollout increased early in 2021, fears and rumors began to spread that would throw a major dent in America’s fight against the pandemic.
The American public has always had an issue with vaccination. In 2018, a survey conducted by Zogby Analytics found that 18% of Americans did not trust the government to provide proper and safe administration of vaccines. And similarly, a Gallup poll in June 2021 showed that approximately 20% of Americans were staunchly opposed to ever taking the COVID vaccine, which is approximately 66 million people in the nation.
But why has there been such vehement opposition to the vaccine? One explanation is the widespread COVID-19 microchip conspiracy. The first public mentions of the conspiracy appeared in early October of 2020, well before the first vaccines began, in radio shows, websites, magazines, seminars, and most prominently- social media posts. Such outcries have since gained remarkable traction and remain a major reason for vaccine hesitancy among the public.
The conspiracy claims that the COVID-19 pandemic, and therefore vaccine, are a ploy by the government and Bill Gates to implant Americans with microscopic tracking devices through their injection. The conspiracy has been repeatedly disproven and denounced by doctors, the CDC and national medical authorities. However, this has not done much to significantly lower the number of vaccine doubters and oppositionists in the country.

In 2019, the WHO declared vaccine hesitancy as a top threat to global health, and now that threat is manifesting severely in America as the nation battles yet more waves and variants of COVID-19.