Congressman and East alum, Representative Kim, hopes for the future 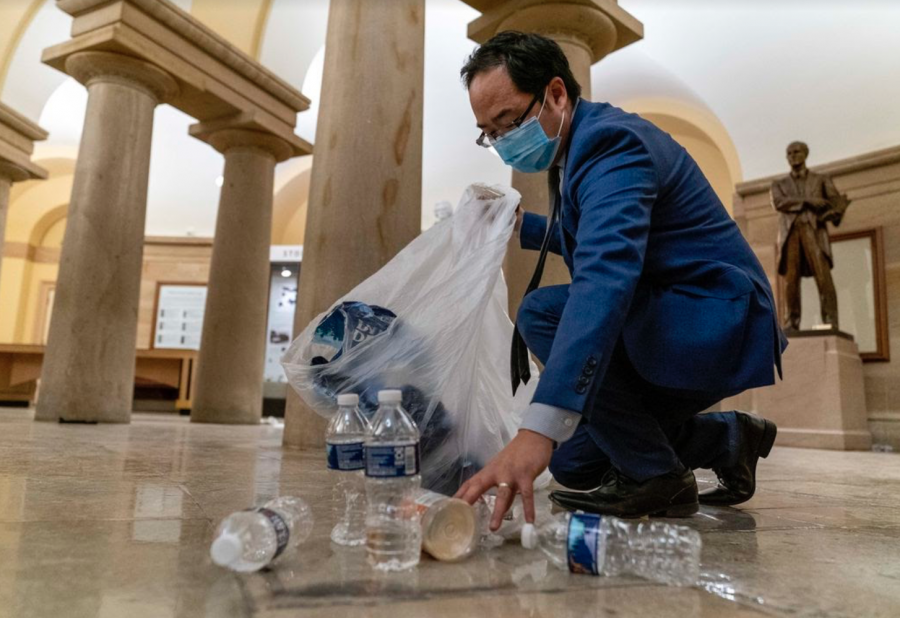 Rep. Kim cleans up debris and trash on the floor of the Capitol after the Capitol Insurrection, an act that brought him national attention.

On January 6th, 2021, Americans all over the country sat glued to their television screens, watching a hungry, ravenous disease spread in the US capital. Uncertainty raced across the nation, and panic flooded the streets. Anxious Americans from all walks of life watched their beloved country nearly torn apart at the seams, whilst insurrectionists stormed the Capitol building. Congressman Andy Kim (‘00), alongside his fellow Americans, watched democracy crumble.

Kim, an East Graduate and United States Representative of New Jersey’s 3rd Congressional District, was present on capitol grounds that fateful day. He recounts multiple bomb threats that were issued prior to the capital breach, but he could not have suspected what was to come. Once alerted rioters had entered the building, he immediately activated shelter-in-place procedures.

“It was just such a surreal experience in many ways,” said Kim. “We’re sitting in the rotunda right now, and it’s still hard for me to really walk around the capitol without thinking about just how bad things got that day.”

According to Architect of the Capitol J. Brett Blanton, rioters caused nearly 30 million dollars of damage to the building, not to mention led to the deaths of five people. Over 250 have been identified for their part in the insurrection as of March.

“As we walked through [the capitol], and to feel like it was being disrespected and desecrated, I’ll never forget that,” said Kim. “It just hit me on such a fundamental level, how much trouble we had that day.”

Despite being on capitol grounds at the time of the breach, Kim was not present on the House floor. Once conditions were safe, however, he withdrew from the Rayburn House Office Building to witness the aftermath of insurrection firsthand.

To Kim, the sight was utterly devastating. He claims the U.S. capitol is the most beautiful building in the country, and usually loves to see Americans traverse its halls. While Kim assumed protestors would cause disruptions, going as far as to ask his staff to stay home January 6th, he did not expect the extent to which things escalated.

As events defused, a photo began circulating of Kim cleaning up trash left by rioters in the Rotunda and National Statuary Hall. Overwhelmed by an instinctual urge to help, he does not view his actions as extraordinary or worthy of recognition. Rather, to him they represent the desire of unification. A desire present in the hearts of most Americans.

“I had so many people reach out to me after January 6th– both Democrat and Republican– saying [the insurrection] does not represent our nation. We definitely have challenges ahead,” he said.

But with these challenges, Kim foresees a hopeful future. As an attendee of President Joe Biden’s inauguration ceremony on January 20th, Kim was presented with a facet of America that stands in stark contrast to the one he confronted just two weeks prior. Welcoming the 46th President of the United States, he sat surrounded by patriotism and ambition.

Kim is eager to help strengthen the fabric of American society and urges students to do their part. He reflects on his time at East and remembers the important lessons of service his experiences taught him. Aside from just voting when students turn 18, Kim insists there is more that can be done.

“Make sure that we are staying engaged, that we’re staying informed, that we’re seeking the information from a diversity of sources, and being very thoughtful about [their] accuracy,” he said.

Certainly, everyone was impacted by the Capitol Riots in a unique way. However, as Americans, Kim encourages this commonality to fuel action.

“We’re all ordinary people trying to go about our work, and we happen to live in extraordinary times right now,” he said. “And now the question is, what do we want to do about that?”