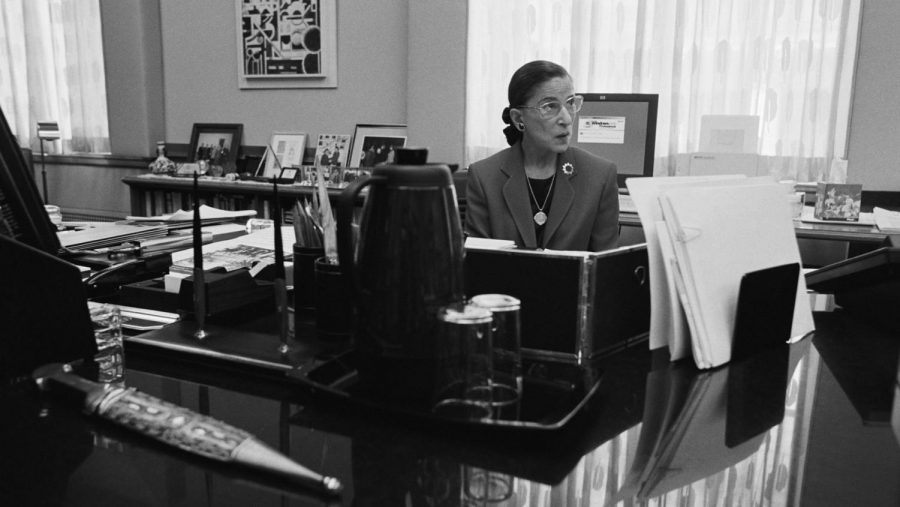 Ginsburg sits in her chambers in Washington D.C. as she files through her work.

In the 1970s, Ginsburg fought against gender discrimination, winning five of her six gender discrimination cases in the Supreme Court. Not only did Ginsburg fight for women, but she also fought for the men who were discriminated against as well. For example, Ginsburg argued on behalf of Charles Moritz, who was denied a $296 tax deduction. In 1970, Mr. Moritz had hired a nurse to help care for his elderly mother. However, when he tried to claim a tax deduction for the cost, he discovered that since he was a bachelor, unlike a woman, a widow, or divorced man, he was ineligible. Ginsburg, along with her husband, argued that the denial was based on the assumption that only women cared for others. They won the case in the Supreme Court, which subsequently brought down hundreds of American laws based on gender roles. And in the Frontiero vs Richardson case, she argued women in the military shouldn’t be denied the same benefits as men.

In 1980, president Jimmy Carter appointed Ginsburg to the US Court of Appeals. She served on the court until president Bill Clinton appointed her to the highest court in the land in 1993. Looking back in her time in the Supreme Court, Ginsburg had a profound impact on American law and society. Starting with the United States v. Virginia case, Ginsberg wrote the majority opinion that monumentally shifted the advancement of women’s rights and university admission policies. Furthermore, she played a significant role in the majority decision for the Olmstead v. L.C. case, which was monumental for the rights of people with disabilities.

However, not all of Ginsburg’s impacts came through majority decisions. In the Ledbetter v. Goodyear Tire & Rubber case, Lilly Ledbetter sued Goodyear Tire & Rubber Company for gender discrimination because she found out that she had received lower pay than her male counterparts despite having the same qualifications and a 19-year career at Goodyear. The case ruled in favor of Goodyear, and it ended up hurting workers because it set a standard that made it difficult to sue their employers over allegations of wage discrimination. Ginsberg famously dissented from the Supreme Court’s decision, stating “the court does not comprehend, or is indifferent to, the insidious way in which women can be victims of pay discrimination.”

In the 2000 presidential election, George W. Bush took a lead over Al Gore by less than 0.5% in Florida, meaning that there would be a recount. However, Gore feared that the election’s ballot polls had inherent flaws, and he asked for a hand vote recount of the ballots. The Florida Supreme Court agreed with his decision, but the Supreme Court ruled 7-2 that the Florida Supreme Court’s decision for a manual recount of votes was unconstitutional. They ruled 5-4 that there was no alternative way to recount the votes. This decision secured Bush’s victory. Justice Ginsburg dissented to the decision and wrote that the “conclusion that a constitutionally adequate recount is impractical is a prophecy the Court’s own judgment will not allow to be tested. Such an untested prophecy should not decide the Presidency of the United States.” And instead of concluding with the traditional “I respectfully dissent,” Ginsburg concluded with her now-trademarked “I dissent,” and the rest was history.