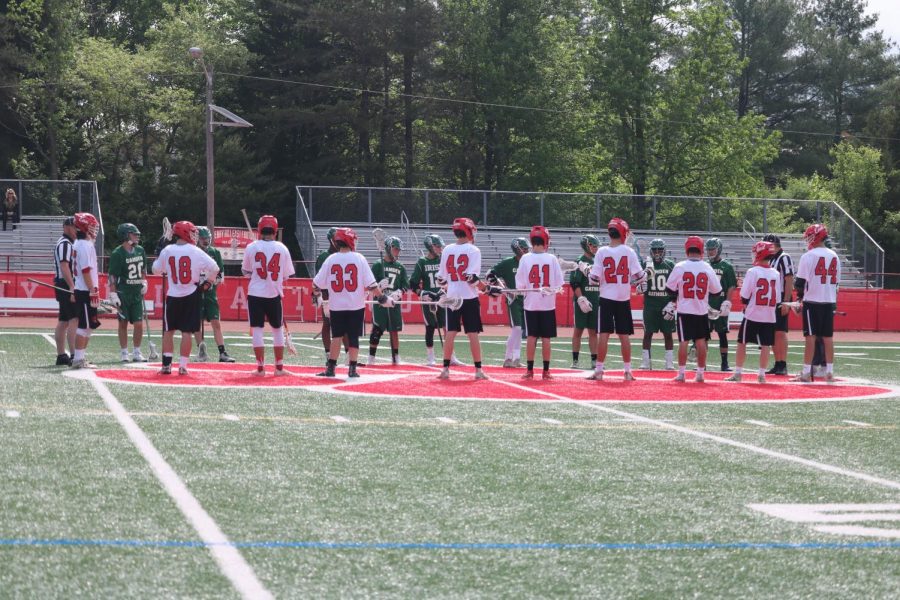 The team gets ready to start the game.

It’s midway through the 2019 spring season and the Cherry Hill East Boys Lacrosse team’s goals are yet to be surpassed.  So far this season, the team has lost a couple of close games that they should have won.

Justin Meyers, head coach, said, “I think this is the most talent we’ve had, [but] we aren’t getting up for every game and that’s not going to work in our conference.”

The key players to look out for on the team are midfielders Andy Murphy (‘19), Brendon Porras (‘19), Brandon Weinstock (‘19) and goalie Harrison Gutin (‘19).  All four seniors are the captains.

Meyers said, “[Our] captains have really developed as leaders this season which I am very happy about.”

The team has a great relationship with each other and they treat each other as if they are family.

“The guys are very close on and off the field.  There are a lot of team building activities, [and] team meals throughout the season,” said Meyers.

The practice schedule is intense, with two hours of practice after school from 3-5 and practices from 8-10 in the morning on Saturday.

“We try to keep an up tempo practice and move the ball as quickly up the field as quickly as possible,” Meyers said.

The team has many goals to round out the season. They have worked extremely hard in practice, and hope that it culminates in a couple of big wins.

“One of our goals was to beat Eastern because they are a Group IV team and we wanted to prove who we are, and we succeed and beat them,” said Murphy.

Meyers hopes that the team will aim for a spot in the playoffs since they will not go .500 for this season. While Meyers wishes that the team had a more intensive focus, he is glad that the boys have an amazing chemistry in order to come together and play the sport they all love.