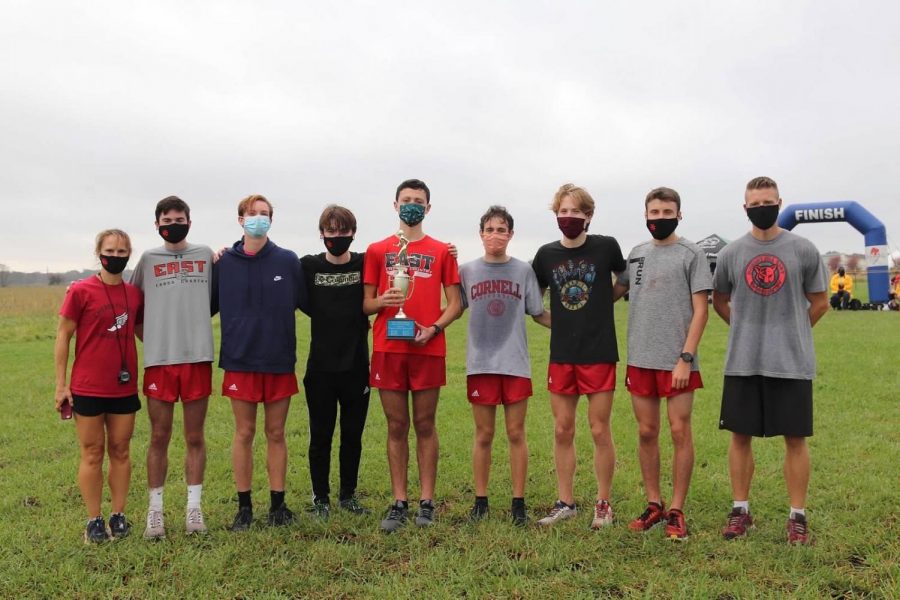 Despite COVID-19, the boys track team had an unforgettable season.

Boy’s Cross Country had a successful and exciting Fall season and overcame the difficulties of running during a pandemic. Finishing the season in second place in the Camden County Championship and the South Jersey Sectional Championship, Boy’s Cross Country came to an end but the brotherhood that sparked while running in harsh conditions or rooting for one another during a tiring race lives on.

Boy’s Cross Country had their most successful event of the season when they won the Olympic Conference against Cherokee because it changed the course of South Jersey running as Cherokee dominated the Conference for the last few years. Winning the Olympic Conference brought the team together unlike before. East witnessed some of their best races that day and won the team championship for the first time since 2014. Aidan Groff (‘21) came in the first place, winning the race with a time of 16:05. Coming soon behind him were other top teammates, Gabe Rodriquez (‘21) in 5th place and Aidan Eyre (‘21) in 10th.

The Junior Varsity Team finished the year with a victory at the JV Championship at Dream Park in Gloucester County. Mason Bulicki (‘21) led the team with a first-place finish in 17:35. East also took the Boy’s Freshman Championship with Raine Guidarelli (‘24) winning with a time of 18:40.

“The end of the season could’ve gone a little better, but overall I am super happy with how my senior year went. I made some big improvements both time-wise and [place-wise]. I was able to win the Olympic Conference [Championship] after finishing 19th as a Junior, I finished 10th at sectionals [this year] after finishing 27th as a Junior, and dropped 39 seconds off my best time from last year” said Groff.

The lowest point of the season came towards the end of this year’s races. Being one of the longest seasons the runners have had, most were all feeling a little tired by the end and it was hard to continue to improve.

The team went into Sectionals with the goal of winning, and then, came in second. “It was a hard day, and a lot of us just did not perform to the standard that we knew we could perform at. I could have improved on being more goal-oriented with myself and my teammates. I did not share my goals as loudly as I have in previous years” said Eyre.

However, the Cross Country team has a special bond centered around their friendship. They are there for each other, give each other advice, and encourage each other to be the best runners and people possible. Most importantly, the team is able to joke around and have fun with each other at the end of a hard day or run.

“Even with losing four guys from our top seven, I think this team can still have a bright future. If everybody continues to work hard and focus on what they’re doing I know they will succeed,” said Groff.

East Cross Country has a lot in store for the future because of the never-ending talent at East and the runners who continue to work hard to achieve their goals.

“Coach Corey does a great job coaching our team, and I think he learns something new from every season,” said Eyre.

Due to the Coronavirus pandemic, major races like the State Championship and the Meet of Champions were canceled. Coming into the season, the team had the goal of winning those races and when they were called off, motivation was left adrift. The pandemic separated Coach Corey from his team for part of the season and the runners took on additional responsibilities to make sure they were still practicing to the best of their abilities.

The team was unable to meet officially until August, negatively affecting the commitment and tangible skill of the runners because many consider the summer as almost half of the season in high school sports. The players missed out on a chunk of time to meet up and complete runs, which they had to complete in groups of two or three while maintaining distance. The favorable traditional large group workouts were compromised, making it difficult to connect with all members of the team in-person. The team took additional health precautions before and while running– filling out a health questionnaire, temperature checks, and masking up for all parts of practice.

“The team did a great job of holding one another accountable and ensuring that everyone was fully invested in our team’s aspirations of achieving our goals,” said Rodriguez.

With the postseason canceled, The boys’ team was accepted a non-affiliated invitation to compete against some of New Jersey’s best programs at the Holmdel Race Invitational on November 25.

“There were lots of highs and lows throughout the season. But, the thing that kept pulling me through was my team because I knew we were all going through it together,” said Eyre.

Hanging above the heads of all the runners, the quote “we will persist until we succeed” has become a motto of East’s Cross Country runners and has taught valuable lessons about motivation and brotherhood, encouragement to become the best, and commitment to a team of near-invincible runners.