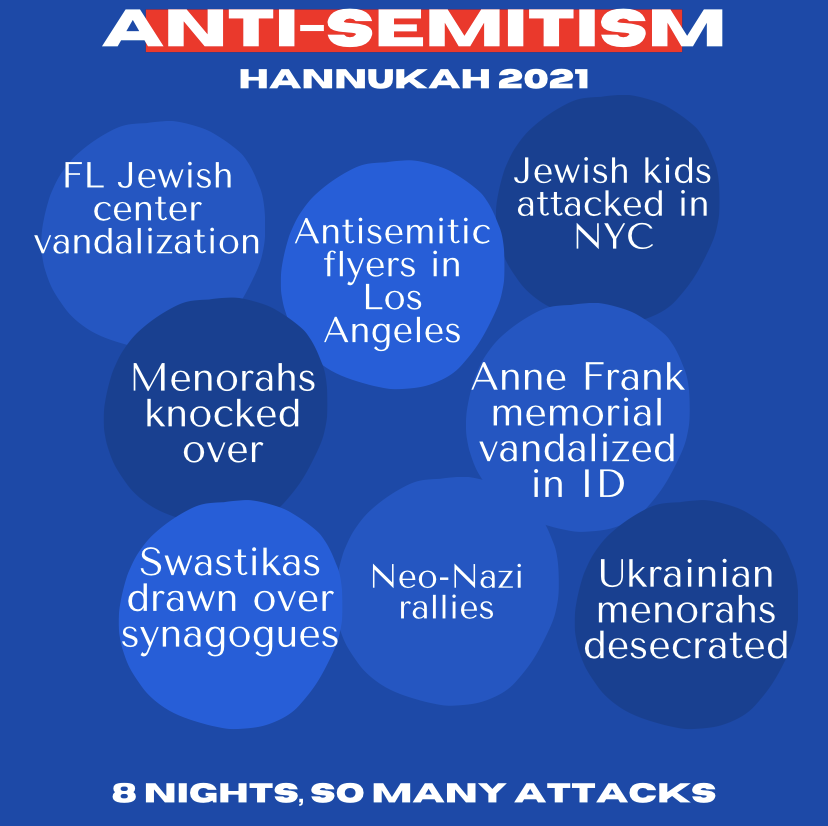 Antisemitism attacks that occurred over Hanukah 2021.

The Anti-Defamation League, (ADL) is the most prominent organization that tracks and records national incidents of antisemitism in the United States. On the ADL website, it states that its mission is “To stop the defamation of the Jewish people, and to secure justice and fair treatment to all…” The ADL has conducted public opinion polls to track American and global attitudes towards Jews over time since 1964. Also, the ADL is widespread across the United States as its organization has 25 regional offices. This way, the ADL is able to respond quickly when antisemitism affects our cities, communities, and campuses.

Antisemitism is on the rise. The ADL website states, “ADL’s most recent Audit of Antisemitic Incidents in the United States recorded more than 2,100 acts of assault, vandalism, and harassment, an increase of 12 percent over the previous year. This is the highest level of antisemitic incidents since ADL’s tracking began in 1979. The year included five fatalities directly linked to antisemitic violence and another 91 individuals targeted in physical assaults.”

The ADL tracks Antisemitic incidents that include recent incidents of Anti-Jewish vandalism, harassment, and assault. These incidents are either reported to or detected by the ADL. The incidents are updated daily.

On February 4 in Brooklyn, New York, an ultra-Orthodox man and woman were walking down a sidewalk on Friday night. Security cameras captured an assailant who trailed behind them in a row of parked cars and struck the man in the back of the head. The assailant knocked the man’s hat to the ground and then fled.

Another antisemitic incident took place over the weekend in Williamsburg. It was reported that vandals sprayed swastikas on school buses for Jewish religious schools. The buses were marked with Hebrew letters.

This antisemitic incident took place on a college campus. On February 3, a swastika was found drawn into the condensation on the glass in Ithaca College’s Baker Hallway.

In Manassas, Virginia on February 2, the police found a swastika spray-painted onto an overpass. The swastika and numbers were visible to drivers who traveled along Prince William Parkway, according to authorities.

On February 2, it was reported to the ADL that a middle-school teacher wrote a transliteration of the Tetragrammaton on the whiteboard and told students, “If you want to torture a Jew, make them say this out loud.”

On February 2, in Danville California, individuals associated with the Goyim Defense League distributed antisemitic propaganda that claimed, “Every single aspect of the Covid agenda is Jewish.”

As it is clear to see, antisemitism is getting worse. These types of incidents happen every day all over the country. The ADL encourages you to speak up and advocate for the Jews in your community. Educate yourself and learn how you can help stop the spread of hate in this world. Talk to friends and family about the consequences of antisemitism. Report incidents of antisemitism to the ADL or your local Jewish community. We can all make a difference and have a positive impact on our world if we are willing to stand up for what is right and educate ourselves.