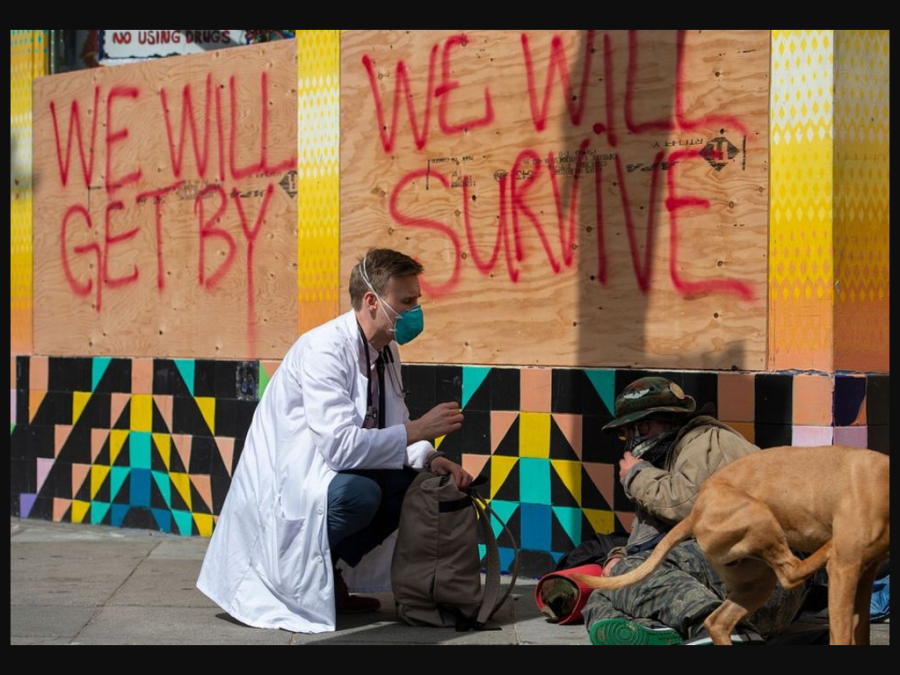 The homeless across the country struggle to stay safe amidst the pandemic.

Tony Henderson is standing casually on the driveway of Jessie Huang’s house, hands in the pockets of his butterfly-decal jeans, wearing a loose sweatshirt and a soft smile. One can not possibly tell from his appearance that six years ago, Henderson did not have a place to live. His story is an instance that sheds light on a kind deed that can sometimes restore one’s faith in humanity.

In the midst of this new mode of living during the pandemic, there has been a population largely overlooked – the homeless. With many shelters closing, social services being reduced, and help largely diminished, it is difficult to dismiss the consequences that these changes have made on the homeless population.

For Henderson, who was once homeless about six years ago, he considers himself lucky. In the midst of the pandemic, he found shelter in the unexpected home of Jessie Huang.

To find a temporary place to stay at night, he would alternate between his friend in Blackwood’s home and his construction boss’s home.

“If I didn’t find a place to go, I wound up riding the bus all night sleeping,” said Henderson.

So, how did he and Huang meet each other?

Four years ago, at a food distribution service in Camden for his ministry, Huang asked Henderson to help him set up the food. Afterward, Henderson would come weekly and help him. Because of Jessie’s background as a real estate agent, Henderson asked him if he knew of any places for him to live.

“I asked, ‘You know somebody who has a room for rent…and [Jessie was] like, I can get you a place to stay,’” Henderson elaborated.

A few weeks later, Henderson was offered a room in Huang’s garage to live in, and began living there permanently.

At first glance, one can see the usual room furnishings in his makeshift room in the garage. There are two refrigerators, a freezer, a bed, and cabinets that extend to the back.

“I’m not out where nobody can hurt me or harm me,” said Henderson.

When he is not at the garage, Henderson helps around the house. Whether it be trimming the lawn, painting a table, or taking out the trash, He helps out with chores as part of his living arrangements. Besides helping out around the house, Henderson also works in construction for a few days a week.

“I can’t just sit around and lay around. I do my own thing and go to work,” Henderson emphasized.

Henderson believes in giving back to the community that once helped him. He volunteered at Cathedral Kitchen, washing dishes or cleaning the kitchen. Now, he goes weekly with Huang and Alex, Jessie’s son, to distribute living necessities including food, clothes, and hygiene products in Camden.

“When I do stuff like that, it keeps me encouraged. And I’m not feeling like I’m just standing around doing nothing,” said Henderson.

“I could be in Camden right now, sitting in the streets like the rest of ’em, in tents and stuff, laying places, under bridges, in the back of alleys,” reflects Henderson.

After almost four years of living with Jessie and his family, Henderson has formed close relationships with them.

“I enjoy [Jessie] and Alex…they like my two buddies: Alex on my left, he on my right,” said Henderson laughing.

When asked if he would continue to live at Jessie’s, Henderson responded with a smile, “I can’t ask for a better place…it beats nowhere.”

During the pandemic, although social distancing may keep people physically separated, a single act of kindness can connect people during this time. For Tony Henderson, Huang has provided a home, not as a stranger, but as a friend and family member.