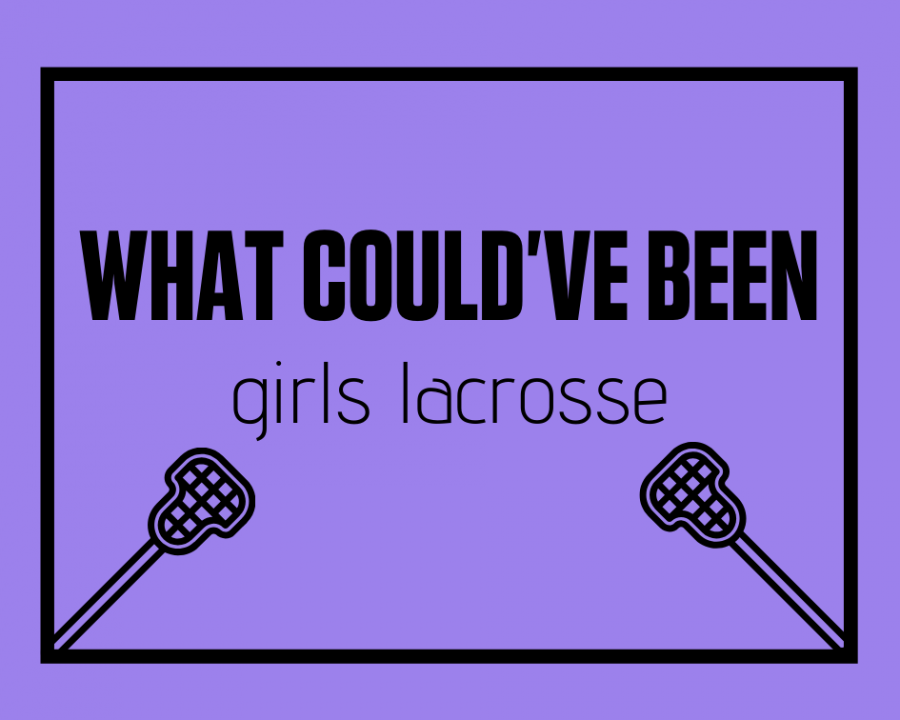 Athletes from the girls lacrosse team look back at “what could’ve been” if COVID-19 hadn’t put a halt to their season.

What could’ve been: Girls Lacrosse

The sisterhood that lacrosse offers is the definition of bonding as a team. As weeks go by without being used, sticks start to unlace and weeds begin to cover the fields that were previously adorned with the cries of victory and the motivation of rough practices. Slowly, the close bonds that stem from being together on the lacrosse field disappears and all that is left is the openness of practicing by oneself to prepare for what is to come.

The COVID-19 pandemic has put a halt to all forms of activity, including all sporting events. Here, we take a look at how the girls lacrosse team is coping with their latest obstacle and at What Could’ve Been their season.

The girl’s lacrosse team went into the season strong and determined as they were expected to do great this year. The girls had a larger group of seniors, which consisted of Nicole Austin, Brianna Canzano, Bella Cepero, Sydney Cicha, Julia Cutler and Vivian Do, than in previous years. As always, the Seniors are some of the best leaders that a teammate can look up to and with a larger number this year, they would have led the team to multiple wins.

“We had done a lot of preparation in the offseason this year, including a league in the fall and [practices which were led by the Seniors] in the winter… We were expected to come back more prepared than past seasons. We had [a lot of girls] going into the season, [which also consisted of] freshman and sophomores to… play with,” said Austin.

Even through coronavirus, the team has been staying active, whether they were working out, connecting virtually or pushing each other towards the betterment of the team, they are always making sure to stay a team.

The team actively connects through group chats, and when they are allowed to meet up in person as a team, they plan to do so.

Austin said “Coach Boyle sends out a team challenge to the [entire] team, which is a challenge that includes running, steps or stick-work challenges. She also asked the seniors for our favorite workouts and would then post them in the [Google Classroom] for everyone to use to stay in shape.”

For the seniors on the team, some of whom have been playing lacrosse since they were in Elementary School never expected for their time playing with a team of their peers to be cut short.

“Now that it’s over, I feel a little sad, it still hasn’t quite hit me yet. My time was cut short completely unexpectedly and I’m more shocked than anything,” said Cutler. Cutler said that she will miss playing as a team and connecting with others who shared her passion at East, as playing lacrosse was more than just playing a sport- it was like joining a family.

“I’ve been playing lacrosse since 5th grade, so going into the season I was excited but sad that this would be my last season playing. I was really looking forward to this season and finally getting a senior day, but now that it ended earlier than expected, I’ve been pretty upset but still trying to find other ways I could still play” said Austin.

“I’m extremely sad that lacrosse is over for the season. Lacrosse is a great way for me to stay active, in shape and to make new friends. I was really looking forward to the season because lacrosse is something I truly love.” said Devyn Levin (‘22). Even though Levin is not actively practicing lacrosse by playing in school, she has been running and trying to work on her stick skills to improve for next season.

So as the time where lacrosse would take a major role in the lives of each team member flies by, the love and passion the team has for one another stays lit. Even though their season was not what they imagined, the Cherry Hill East Girls Lacrosse team continues to connect and share the sisterhood that the sport offers.

As the sticks start to unlace and the weeds begin to cover the overgrown fields, the story of this season will only be remembered as the story of “What Could’ve Been.”