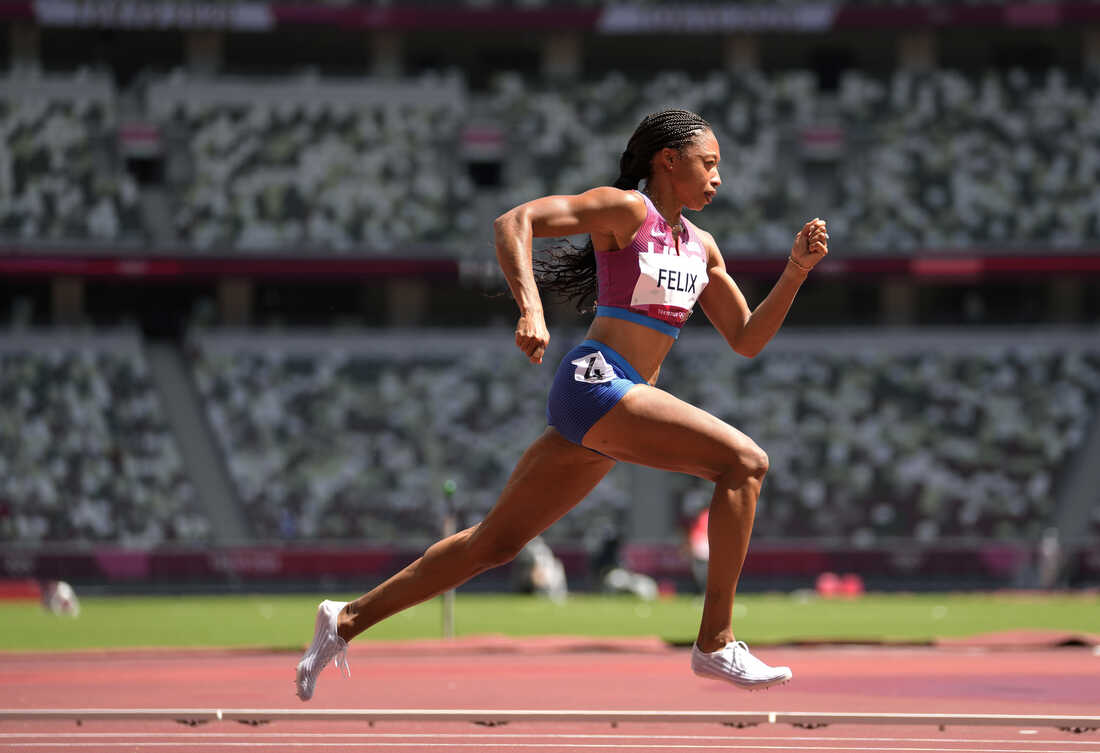 Track and field is a collection of sports that includes running, jumping and throwing events. With so many different athletic events taking place in one space and the high number of athletes competing at track and field meets, it is easy for some of the most talented athletes to fly under the radar. Fans of the sport, however, know of these elite athletes who have pushed physical limits to take their sport to the next level of competition.

Some of the best female runners in the world compete for the U.S. Women’s Track and Field team. These amazing athletes have set multiple records in their events and have helped the U.S. remain a top contender on the world stage. While there is an abundance of high achieving track and field athletes across all events, the four athletes highlighted below compete as sprinters.

Sydney McLaughlin is considered one of the greatest hurdlers in the world. McLaughlin holds the women’s 400 meter hurdles world record with a time of 50.68 seconds which she earned at the World Athletics Championships located in Eugene, Oregon in July 2022. To add to the awe of McLaughlin’s accomplishments, you only need to ask whose world record she beat . . . McLaughlin smashed her own previous world records on four different occasions in a little over a year.

McLaughlin’s honors include winning a gold medal at the 2020 Tokyo Olympics for the 400 meter hurdles. She also took home a second gold medal in Tokyo for the 4×400 meter relay. Although she is only 23 years old, McLaughlin is a two-time Olympian who also competed in the 2016 Summer Games in Rio at age 16, which made her the youngest American track and field athlete to compete at the Olympics since the 1970s.

McLaughlin comes from a family of runners so it was no surprise that she demonstrated natural talent on the track. Both of her parents were successful runners. Her dad, Willie Mclaughlin even ran the 400 meter relay at the 1984 Olympic trials. Additionally, Sydney Mclaughlin has three siblings. All of whom had impressive high school and college running careers. At age 6, Mclaughlin won her first race for the 100 meter sprint and her parents rewarded her with a chocolate bar. After that, she kept trying new events and the records began piling up. During her time at Union Catholic High School in New Jersey, McLaughlin set 23 school records for track. After graduating high school in 2017, she chose to run for the University of Kentucky where she was able to experience college life and gain independence instead of going pro straight out of high school. When Mclaughlin finished her first year of college, she became a professional athlete. The key to being a successful hurdler is mastering the proper form. McLaughlin has great hurdling form and an amazing natural talent that makes her the best in the world. Every hurdler aspires to have technique just like her. She keeps shocking the track and field world with her exceptional performances. If her results this summer are any indicator, McLaughlin will continue to dominate in future races.

Allyson Felix is the most decorated female Olympic athlete in track and field history. She is a five-time Olympian and has competed in every Olympic Summer Games since 2004. At age 35, Felix was part of the 4×400 meter relay team that won a gold medal at the 2020 Tokyo Olympics. She also won an individual bronze medal in the 400 meter in the Tokyo Games. During her long and successful Olympic career, Felix won a total of 11 medals for Team USA. Her medals include seven gold, three silver, and one bronze.

Felix began running during her freshman year at Los Angeles Baptist High School. In 2003, she was honored as a “Track and Field High School Athlete of the Year”. After high school, Felix attended the University of Southern California and also went pro. Felix continued to run and compete professionally while working toward her college degree. She graduated from the University of Southern California in 2007 with a degree in Elementary Education.

While Felix announced her plans to retire from track after the 2022 season, she continued to support Team USA. After a brief one week retirement in July, Felix answered a phone call from the Team USA coaches and made a return to the track to help the 4×400 meter women’s relay team compete in the preliminaries at the World Athletics Championships in Eugene, Oregon. The women’s relay team placed first in the preliminary rounds and secured a spot for their teammates who were scheduled to run in the finals. It was a thrilling last race for Felix. 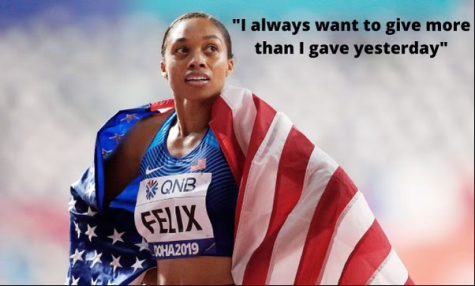 Felix will continue to make an impact on women’s sports in the years ahead. Be on the lookout for Felix’s next chapter as a mother, advocate, and activist for both women’s health and rights. Felix is the mother of a daughter named Camryn who was born in 2018. In 2019, Felix left her affiliation with Nike because the company was not supportive of her decision to become a mother while continuing her professional running career. Felix persevered and decided to find a new sponsor that would support her choice to become a working mother. This led to Felix’s partnership with Athleta. She felt that Athleta was the right fit for her as a new mother because she and the company share the same values of supporting girls and women. She is also a member of the Women’s Sports Foundation, which advocates for girls and women in sports and promotes equal pay for women that are involved in sports.

Felix has high standards for herself and believes that it is important to act with character and integrity. Recently, Felix has launched her own shoe brand called Saysh, which makes shoes that are designed specifically for women’s feet. Felix is a big advocate for women, and is also an incredible athlete and a role model to many people.

Sha’Carri Richardson is an extremely fast sprinter who, at age 21, was favored to win the women’s 100 meter race at the Tokyo Olympics. You might recognize her by her bold personality, long nails and ever changing hair color. Richardson is a native of Texas, where everything is big, and her personality and determination are no exception.

You might also have heard her name during the Tokyo Olympics when Richardson received a month long suspension issued by the U.S. Anti-Doping Agency after testing positive for marijuana use. The timing of the suspension meant she could not compete in the Tokyo Olympics. Although marijuana is not a performance enhancing drug, it is banned by the World Anti-Doping Agency, also known as the WADA. The WADA has plans to review the status of cannabis on the anti-doping list, but it currently remains a banned substance in 2022. 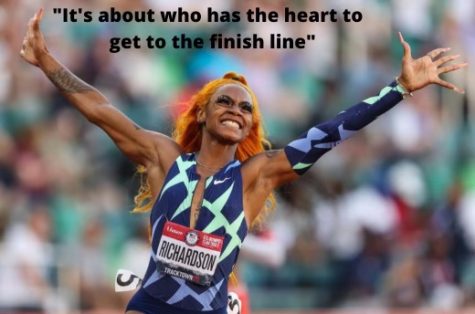 Richardson acknowledged that she had used marijuana to cope with the death of her biological mother, and accepted the suspension during the Summer Olympics. Questions about the fairness of Richardson’s suspension surfaced during the 2022 Winter Olympics in Beijing after a Russian skater was allowed to compete despite testing positive for trimetazidine, a performance enhancing drug that is banned by the WADA. Many people believe that Richardson was treated unfairly when she was denied the opportunity to compete at the Olympics, but she has plans for a comeback.

Richardson, who was the top female sprint recruit for 2018 ran track at Louisiana State University during her freshman year of college. She holds the record for the women’s 100 meter in the NCAA Championship, where she ran 10.75 seconds to win the title. Her personal best time is 10.72 seconds in the 100 meter. Richardson’s 2022 season has been impressive so far and she is scheduled to compete in several races this summer. Her current times rank her as one of the top six fastest 100 meter women in the world. It will be exciting to watch Richardson compete on the track this year.

Gabby Thomas took home two medals from her first Olympic games in Tokyo in 2020 where she got a bronze medal for the 200-meter and a silver medal for the 4×100 meter relay. While training for the Olympics, Thomas ran track for Harvard University and was named “Ivy League’s Most Outstanding Track Performer” in 2017 and 2018. In 2019, she graduated from Harvard with a degree in Neurobiology.

Inspired by her brothers who have ADHD and Autism, Thomas was drawn to study neurology in college. While her original plans were to become a working scientist right after she graduated from college, a great race at the Olympic trials changed the timeline for Thomas’s career plans. Thomas ran the 200 meter race in a record setting time of 21.61 seconds. This time made Thomas the all time third fastest 200 meter women’s sprinter. In a mind blowing turn of events for Thomas, she beat her running idol, Allyson Felix in this Olympic qualifying race. Her winning time secured her a spot on the U.S. Olympic Team.

This spring, Thomas competed at the Doha Diamond League and earned another amazing achievement on the track with a record time that beat Allyson Felix’s 2012 200 meter record of 21.69 seconds. Thomas won the 200 meter with a time of 21.61 seconds. Thomas is sponsored by New Balance and has plans to continue competing. She is also currently pursuing a master’s degree in Epidemiology at the University of Texas.

Based on her success at the Tokyo Olympics and her performance in recent races, Thomas does not seem to have peaked yet. Thomas plans to compete at the 2024 Paris Olympic games and there could be gold in her future.

The U.S. Women’s Track and Field team has some of the greatest sprinters in the world. Whether they are performing before the world on an Olympic track or advocating for women’s rights, all of these women have the determination and intelligence to turn their dreams into reality. While no one is guaranteed to win every race, the future looks bright for these track and field stars.