The East Girl’s Cross Country team excels in their season 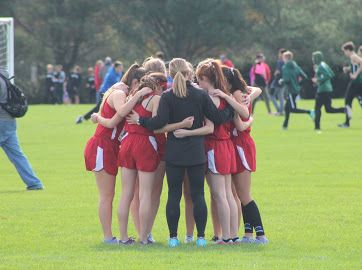 “It is remarkable how [the girls on the cross country team] get along, because outside of cross country they have diverse interests and hobbies, so it is nice to see them come together for a common goal” said Mr. Anthony Maniscalco, Cherry Hill East’s cross country coach.

This year the girls cross country team ran ten total meets. The team came in first during one meet, but came in various other places in the other nine meets. Cross country is scored by the first five runners from each team to cross the finish line who receive the points corresponding to their place. The first place runner receives one point, the second place runner gets two, and so on. The team receiving the lowest score wins. Also, during a meet there are a lot of schools in different meets and each school competes to advance to sectionals, states, and then champs.

Maniscalco has been coaching cross country since the fall of 2008. He said that when he first began coaching back in 2008 the team only had 12 girls, but this year the team finished with 34 girls.

“I am really proud to have built that program,” said Maniscalco ecstatically.

Maniscalco said that cross country has always been his favorite sport. He ran on the Triton  High School team and on the New York University team as well. He has been to some of the courses the girls ran this year, and described his experience as nostalgic.

Maniscalco runs with his runners during practice because he believes when a coach does workouts with their team then it does not seem like such an impossible task and motivates the runners.

During this season, he is proud of the involvement and improvement of the girls, and he will never be disappointed in the girls as long as everyone tries their best. His main focus is on positive aspects of each Batch meet, and always tries to emphasize on the fun aspect of the sport.

One runner in particular who made it to states this year is Sarah Pierce (‘19). Pierce has been running cross country since her sophomore year. This year she won two races and advanced to states, but she did not win. However, her goal next year is to advance to the Meet of Champions. Pierce joined the team because she loves running, especially with other caring and compassionate teammates. For instance, a runner on the team fell at DeCou Complex and injured her knee, so a group of girls ran to Richterman and back to get help, even after running a hard practice. She is apart of a very close-knit team that is able to make lasting memories throughout the season.

Another varsity runner, Dani Lazarus (‘19), has been running cross country since her freshman year. Unfortunately, this year she suffered with a strained calf muscle due to over running in summer and beginning of the cross country season. Since her strained calf affected her season, so she had to miss four meets. However, when she came back on her first meet she had her season personal best record.

“You can’t let an injury stop you from practicing and working hard,” said Lazarus.

Lazarus is optimistic for next season, and her goal for next year is to have a personal record during one of her meets and advance to states.

According to Pierce and Lazarus, the cross country team is definitely a group of girls that are closely bonded and good friends. Maniscalco said the team participates in activities to ultimately unify the team. The team participates in ultimate frisbee, runs to Diane’s Water Ice during practice, and even has psyche parties before their races.

Maniscalco is excited about next season and looks forward to developing younger runners so they can perform to their true potential. He is shocked to see how quickly time has gone since he began coaching, but he is grateful for the opportunity to continue coaching such a great team.