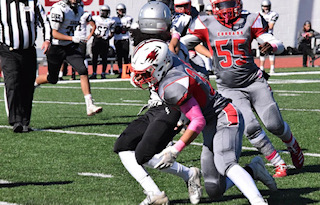 Egg Harbor Township player goes to the ground after a tackle.

The Cougars did not earn the result they were seeking on Saturday, October 19 as the Egg Harbor Township Eagles dominated in the Cougars’ final home game of the season. East celebrated the 12th graders before the game, but the excitement died down after Egg Harbor took their first drive over 60 yards and capped it off with a touchdown. The extra point was blocked by Khalil Harden (‘22).

The Eagles pounded the run throughout the game, spearheaded by Avery Mckim (‘21) who went on to score one touchdown and had over 50 yards on the ground. East running back Mike Wheeler (‘20) had several hard runs for gains, and receiver Shane Trainor (‘20) had a couple of quality catches.

Without many key players due to injury, the East defense remained able to pressure the quarterback and only surrendered two touchdowns and a field goal. As time expired in the first half, Eagle’s special team player Y.Triniwell (‘20) blocked a field goal attempt and returned it 75 yards for a touchdown. He also had an interception returned for a touchdown, returned over 80 yards on third down in the third quarter.

Defensive linemen Jadon Louis (‘21) and Nick Tomasello (‘21) continued to perform well with a pair of sacks between them and several tackles for loss. Linebacker Sean Coen (‘20), Safety Will Mcfadden(‘20) and Safety Tyler Burke(‘21) made several key tackles as well.

There was some controversy as the Eagles Head Coach received an Unsportsmanlike Conduct penalty after arguing the fairness of a blindside hit on Cougars’ Justin Becker (‘21). There was some tension late in the game, but it meant little as the Eagles walked away with a 31-0 win.

“I’m going to keep playing my heart out. Keep playing for my teammates… and hopefully we finish this season out strong,” said senior captain Mike Wheeler. The Cougars hope to bounce back as they face Seneca next, before the much-anticipated Cherry Hill rivalry game against West on the 27th of November. As for the senior leaders, they already have more wins this year than last year and will fight to make it four wins on the year.