The 2021 Cherry Hill East Athletic Hall of Fame Inductees after getting inducted.

The 2021 East Athletic Hall of Fame

The Athletic Hall of Fame Ceremony on November 27 inducted 15 athletes, 2 coaches, and 1 staff member for their achievements and dedication to East’s athletic program. At Indian Springs Country Club, 2021 inductees ranging from the class of 1970 to 2000 gave speeches emphasizing how much it means to be a member of the Athletic Hall of Fame. They also explained the impact East athletics had on their careers and who they are as people. Unfortunately, the ceremony was unable to honor Rick Fisher, Jay Dillenschneider, and Lori Miller as they were not able to be in attendance. A special thanks goes out to Fred Belchikoff, Ed Canzanese and the Hall of fame committee for putting together such a wonderful afternoon in celebration of all of the honorees. 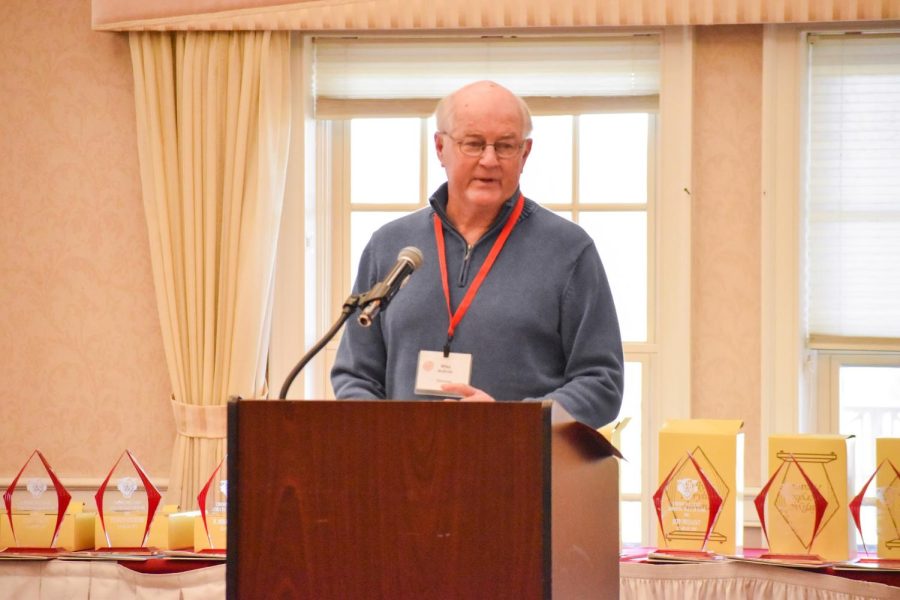 Mike McBride, a graduate from the class of 1970, was privileged to start all 4 years for football, basketball and baseball. After high school, McBride walked on to the U.S. Naval Academy’s football team.

“I always made it a point to get together with teammates when coming back home”
“East prepared me for the toughest job: being a husband, dad, and poppop” 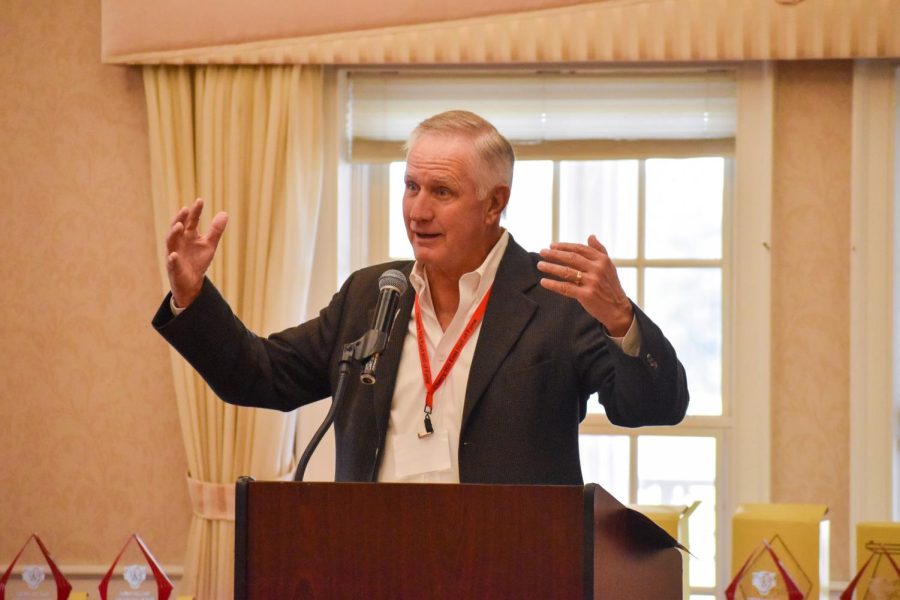 Ed Kornberger, a graduate from the class of 1972, played football, basketball, and baseball while he attended East. During Kornberger’s junior year, he was selected as an All-Group 4 player in each sport. After his career at East, he attended Duke University on a full basketball scholarship.

“None of the inductees would be here without such tremendous support”

Brad Pomeroy, a graduate from the class of 1977, 9 varsity letter athlete for cross country as well as winter and spring track. After his career at East, Pomeroy ran at Rutgers University.

“I don’t think I have ever been asked to speak in high school, I always asked to shut up”

“I was never good at baseball, but I was good at running the bases”

“I had million dollar legs and a ten cent head” 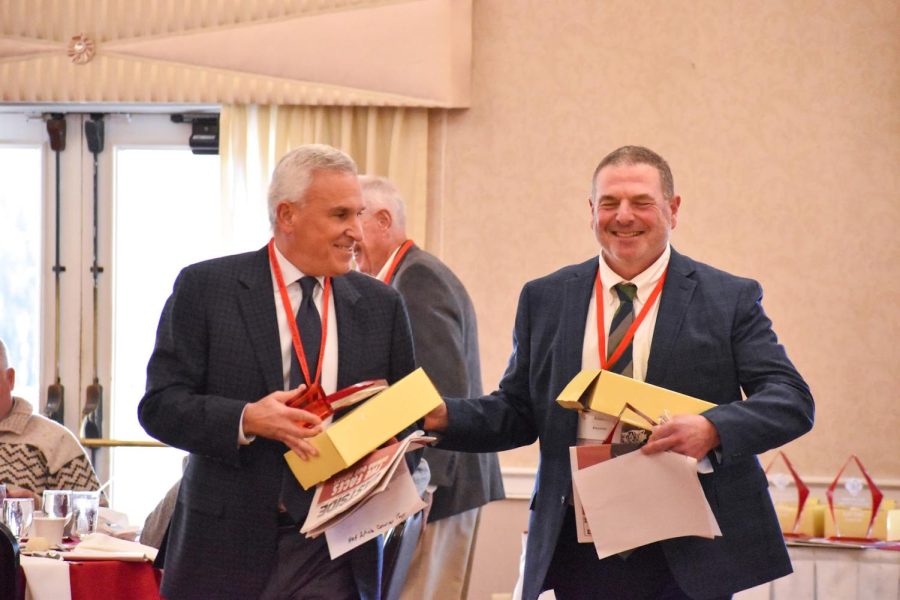 Jeff Presant and Wayne Streibich, graduates of the class of 1980, were members of the Varsity Tennis team. In their junior and senior years, they went undefeated, doubled up together, with a record of 52-0. They were named first team All-Conference, first team All-South Jersey, and first team All-State. They asked to be introduced together, considering they were the best duo.

Jeff Presant (1980):
“Practice makes perfect, no ones perfect so why practice”

Wayne Streibich (1980):
“More than a partner, Jeff has been one of my best friends for my entire life”

“The greatest victories are those that are shared with others” 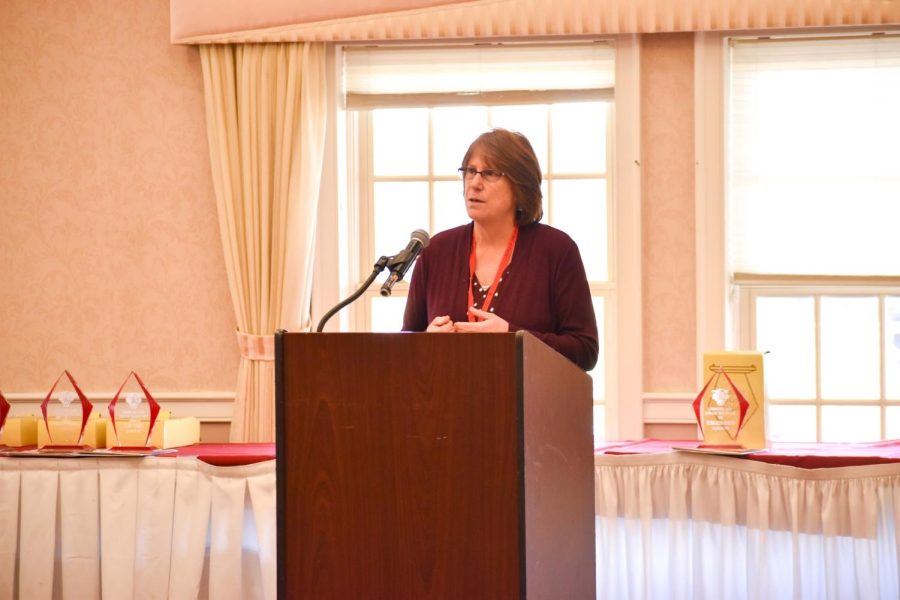 Nancy Davis, a graduate from the class of 1980, played softball and basketball. For basketball, Davis was selected as a first team All-South Jersey player. After her career at East, Davis went off to play basketball at Davis and Elkins College.

“I feel blessed that we are given this talent to succeed, not just through our sport, but through our endeavors”

“What we went through and experienced in high school, prepared us for our futures and our lives”

“Truly blessed to be here” 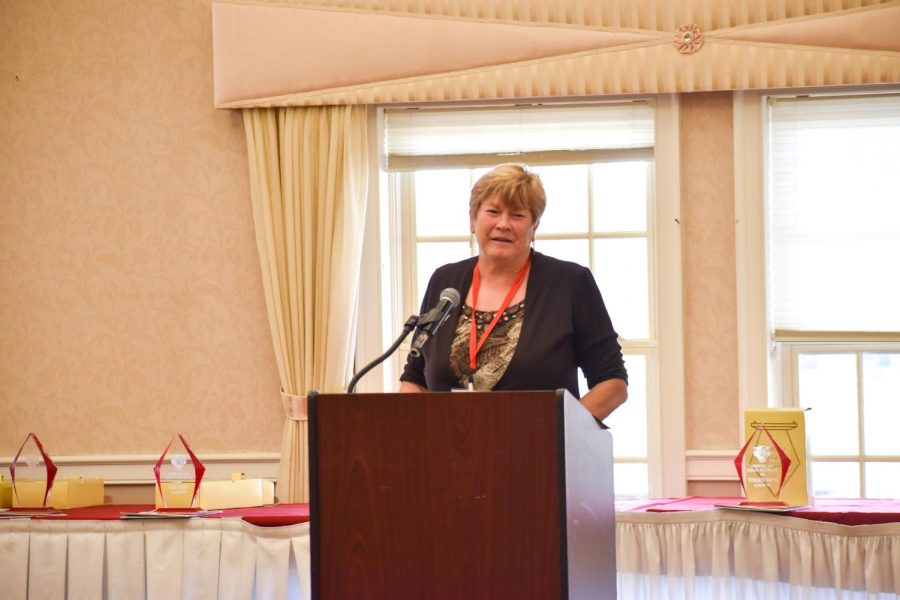 Karen Fitzpatrick was inducted into the 2021 Athletic Hall of Fame.

After graduating from West Chester University in 1973, Karen Fitzpatrick began her coaching career at East, After years of being the assistant coach, Fitzpatrick became the head field hockey coach, coaching her team to 4 South Jersey Conference State Championships. Her final year coaching, the team won the Group IV State Championship and finished the season out with a 18-0-1 record. In 1980, Fitzpatrick was selected as the field hockey coach for Ball State University.

“One special memory I want to share is a little scenario after the Group 4 South Jersey Championship, we just squeaked it out in the last 5 minutes of the game…on the bus everyone was laughing singing like we always did…3 forwards sitting behind me in deep conversation…Dj said, ‘we promise that we will never play like that again,’ even though they won they were not happy with how the game went, those forwards ended up scoring 5 or 7 goals in the next couple of games with no goals scored against us, undefeated top ranked team” 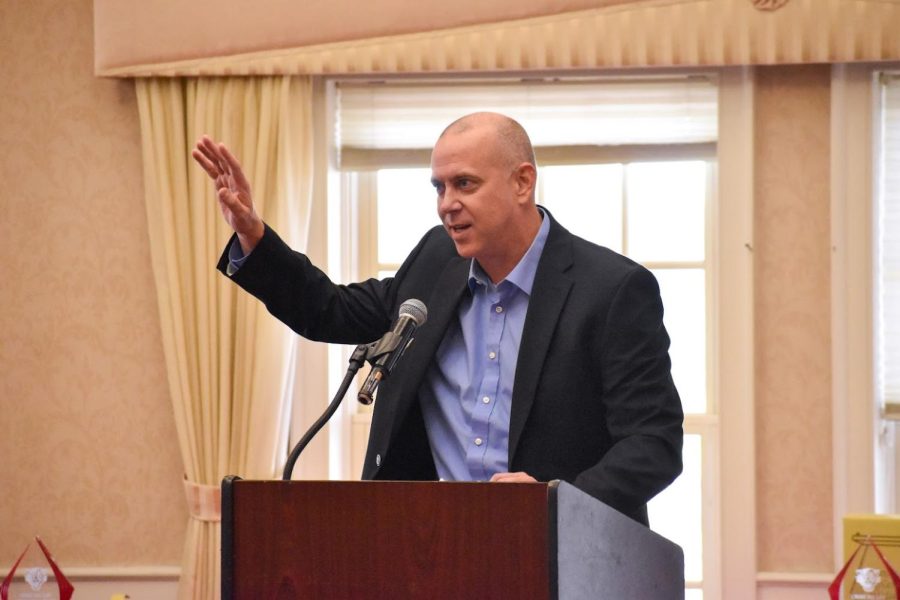 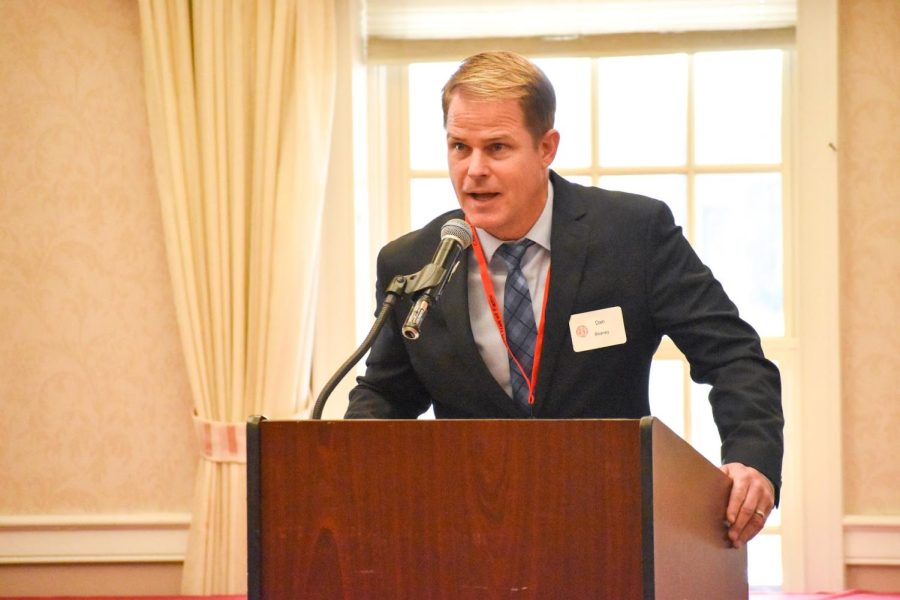 Dan Beaney, graduate of the class of 1989, played varsity soccer for 3 years at East. In Beaney’s junior year, he led his team to the group IV state championship. His senior year, he was the team captain, MVP, All-South Jersey, All-State, and NJ Defensive Player of the year. After high school, Beany accepted a full-athletic scholarship to play soccer at UCLA.

“I look back on New Jersey and look back on the impact it’s had on me, not just with soccer, but also on my life” 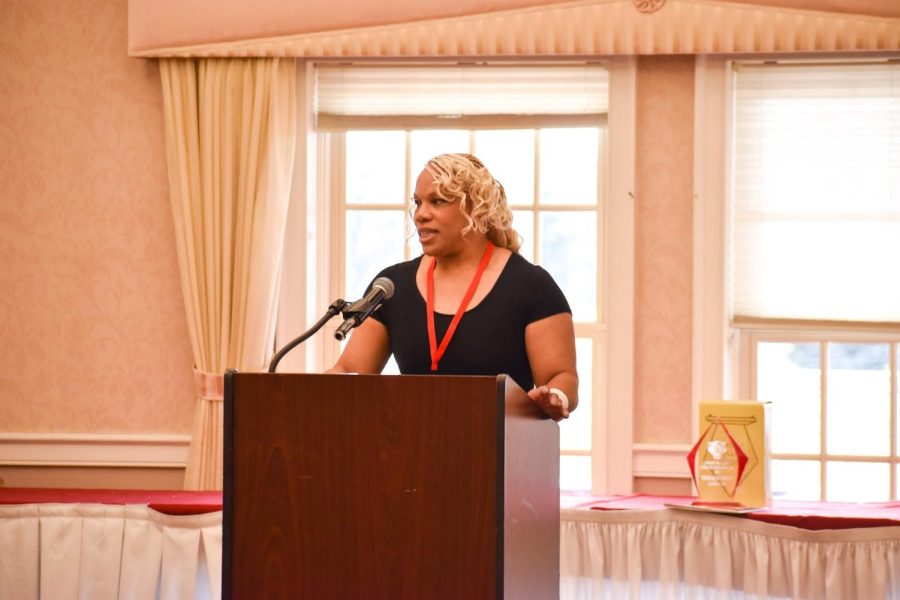 Teneacia Smith, a graduate from the class of 1993, ran track and participated in field events, which allowed her to make the All-South Jersey team and compete in the NJ State Meet of Champions. 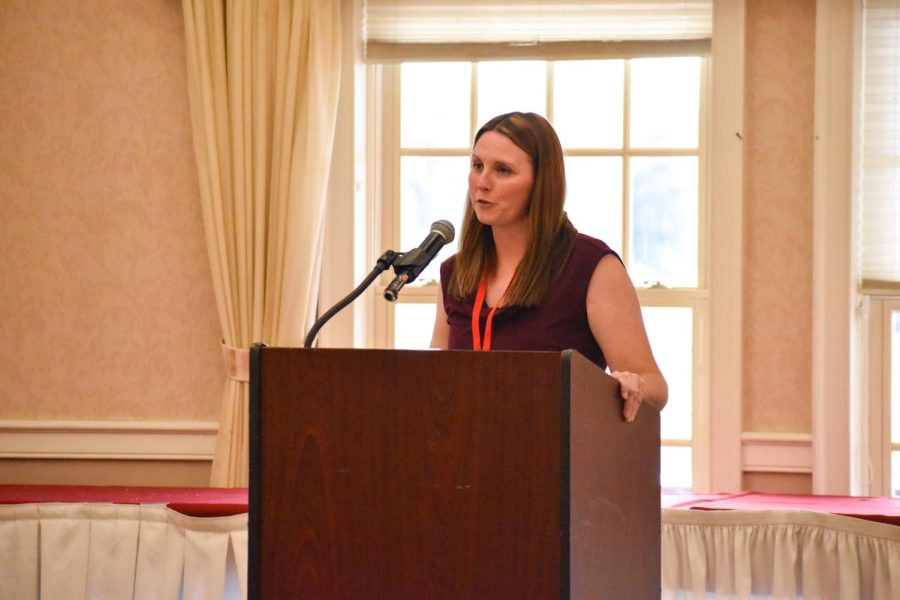 Jessica Naumann Semar (1999) was inducted into the 2021 Athletic Hall of Fame.

“No fun doing it by yourself, you need a team to surround you”

Fred Knouse was inducted into the 2021 Athletic Hall of Fame.

Fred Krouse began his career at East in 1968 and coached his swim teams to 21 conference championships, 15 sectional championships and 10 state championships during his tenure. In 1999, Fred retired to his home in Medford with his wife, Barb.