Summer swim teams act as a break from intense competition 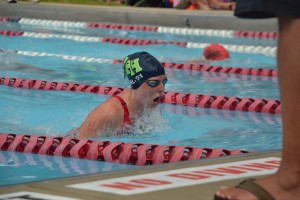 At Cherry Hill East, swimming is a highly popular sport that many students take part in. However, some swimmers only swim in the summer for their neighborhood team and not during the winter season.

The winter swimming season is often considered much more competitive and important than the summer seasons. Some of the winter teams practice all year long but not all athletes stay with them for the full season and practice with their summer teams.

For winter teams the meets are more serious. There is usually one meet a month that everyone on the team has a chance to swim in, but those meets aren’t about the teams winning. At those meets there are about ten teams at the pool and the swimmers don’t race for points for their team but they race simply to get new times and qualify for bigger and more important meets.

Swimmer’s times at summer meets are saved but are only used for meets in their county whereas the times for winter meets are usually ranked nationally.  Colleges pay more attention to how swimmers rank in the bigger meets rather than dual summer meets.

During practice winter teams usually put more stress on their swimmers. They make the practices harder and practice more often. On summer teams the coaches usually realize that an athlete’s success in that season does not have much effect on their future swimming careers. Winter coaches want to help the swimmers qualify so they could move on to swim for the national team or for their colleges.