Sixers prepare for the 2017 NBA Draft 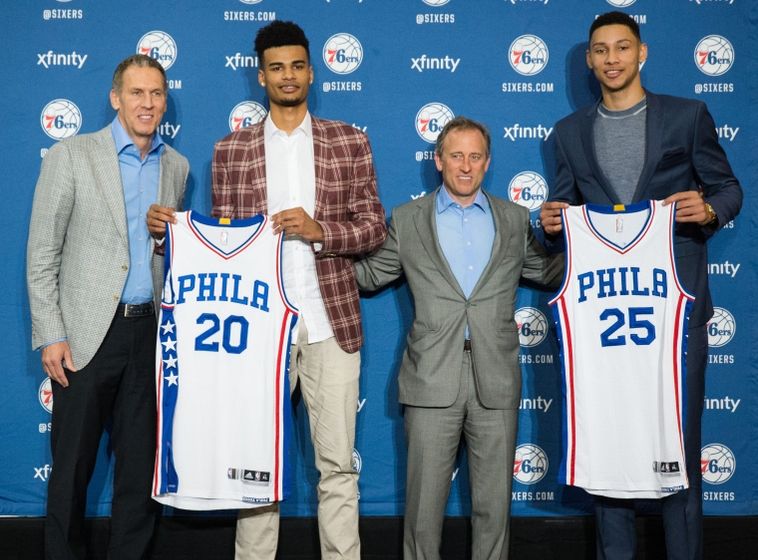 Late Sunday night, news broke that the rumored trade between the Philadelphia 76ers and Boston Celtics for the number one overall pick in Thursday’s NBA Draft had been finalized. To get the first pick, Sixers’ General Manager, Bryan Colangelo, had to trade the third pick, as well as either the Lakers’ first round pick next year (if it lands in the 2-5 range) or the more favorable of the Sixers’ and Kings’ 2019 first round picks. However, Boston would get the less favorable pick if one of the picks is number one. It is incredibly detailed and complicated, but the bottom line is that the Sixers are giving up one pick to move from three to one and get a franchise-altering talent in Markelle Fultz, and they have guaranteed that they cannot end up giving away a future number one overall pick. This blockbuster was clearly won by Philly, who have now set themselves up for the brightest future in the entire NBA.

The goal when a team rebuilds is to either draft or obtain assets to trade for a potential superstar. Save the 2004 Detroit Pistons, virtually every team that won a championship in recent years has had a bonafide superstar. Therefore, if the goal is to build future championship contender, that is the first step. The Sixers now have three players with superstar potential.

Joel Embiid flashed transcendent ability in the 31 games he played in last season. But, it’s hard to rely on him to be your only centerpiece, because those were his only 31 NBA games in the three years since he was drafted. However, if he can stay on the court, he likely will be able to carry a team to a title. His offensive versatility and already dominant defensive prowess give him Hall-of-Fame level potential. And the scary part for Sixers fans is, the future is very much a mystery if “The Process” can’t maintain health.

Ben Simmons, last year’s number one pick who is set to make his NBA debut after recovering from a broken foot, may actually have the lowest ceiling of Philadelphia’s three cornerstones. This is crazy because he could possibly be the brightest future star for the majority of the league. His skill-set is one of a kind as he possesses court vision and passing ability reminiscent of Magic Johnson and LeBron James. Not to mention the fact that he has a massive frame- he’s listed at 6’10- but reportedly grew over an inch during the season. He is a force of nature, an excellent athlete who can do whatever the team needs- except for one thing, one thing that could prove to be his fatal flaw if he doesn’t improve it. Ben Simmons is a bad jump shooter. His form isn’t broken at all, in fact it looks totally fine- he just isn’t accustomed to shooting jumpers. If he becomes an average shooter, he can likely become the best player the Sixers have. If not, his offense could be severely limited.

And now, the second number one pick in a row comes to town. Markelle Fultz is not only the consensus best player in this draft, but he plays point guard, a position that the Sixers need help in, and he fits perfectly with the aforementioned centerpieces. He can dominate with the ball in his hands, but can also excel playing off-ball, which is what fans will see more now that he will be teamed with a primary ball-handler like Simmons. His shot is above-average, he’s an excellent scorer, and has all of the tools to be a great defender.

But every team needs role players to go with their core- and the Sixers have tons of them, most notably Robert Covington and Dario Saric. Covington will serve as an elite “three and D” player- someone who specializes in perimeter defense and shooting. He will likely get a big contract extension next winter which would be totally deserved. Dario Saric, the 12th pick in 2014, is primed to become an elite sixth man. He can come off the bench while still playing heavy minutes and provides a great spark off the bench with his scoring and passing. TJ McConnell can be a very good backup point guard for a long time, he just has a knack for making the right play. Swingman Timothe Luwawu-Cabarrot flashed three and D potential in his rookie year last year. Those players, combined with the abundance of future draft picks bodes for a very promising future. And what people forget is that they have the second most cap space in the entire league, which means they can pay free agents they want more than most other teams can. The Sixers, thanks to former GM Sam Hinkie collecting an unprecedented collection of valuable assets and current GM Bryan Colangelo cashing them in for the right prize, now have the brightest future in all of basketball.