The juniors were coached by Alex Kauth (’11) and looked to pull off an upset of the seniors.

The seniors started off the scoring with a touchdown pass from Tina Paglione (’10) to Kyra Holiday (’10).  Claire Diemer (’10) then  kicked the football through the uprights to make the lead 8-0 in favor of the seniors.  In Powder Puff football, touchdowns are six points while extra points are two.

The juniors had yet to put points on the scoreboard until  Marie Boisvert (’11) intercepted a senior pass to end the drive.  On the ensuing possession, Caroline DiBartolomeo (’11) then scampered into the end zone for a 70-yard touchdown.  Rachel Sindoni (’11) converted the point after attempt to make the score 8-8.

The score remained the same going into halftime.  Coach Cassano had a simple strategy towards taking over the game in the second half and coming away with the victory, to “run it down their throats.”  Kauth wanted to run the ball as well, but in a different style.  He too, put his gameplan succinctly:  “We are going to give it to the fast ladies and run.”

Avid junior fan Jonathan Silverstone (’11) was surprised by the intensity of the game.  Silverstone said, “They treat it like the Super Bowl.”

The Seniors started off the second half scoring with a touchdown run by Holiday to make the score 14-8 in favor of the seniors.The game started to heat up physically in the second half.  Every single girl out there wanted to win and it showed.  The girls were very aggressive and penalty flags seemed to be flying from every direction in the second half.

After a long run by Jonessa Jackson (’11) to bring the ball to the senior 10-yard line, the junior drive stalled after Monica Bonitatis (’10) batted down a junior pass in the backfield and then Aubrey Rossi (’10) intercepted the next attempted pass.

Using this defensive stop as momentum, the seniors drove down the field and Bonitatis caught a touchdown pass from Paglione to cap off the drive.  Diemer converted the extra point to give the seniors a 22-8 lead.

The juniors still had more fight left in them though.  Led by quarterback Aubrey Mellul (’11), they drove right down the field and scored a touchdown on a pass from Mellul to Boisvert on which Boisvert made an excellent jumping catch over the defender.  Sindoni converted the extra point to put the juniors within six points and the score at 22-16.

The score stood at 22-16 as the clock expired giving the seniors the victory and a perfect Powder Puff record.  Cassano was thrilled to be a part of the win.  He said, “It’s an excellent feeling to be a part of greatness.” 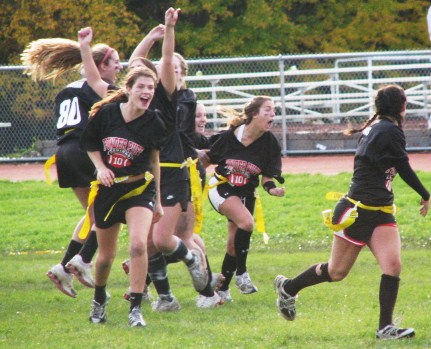