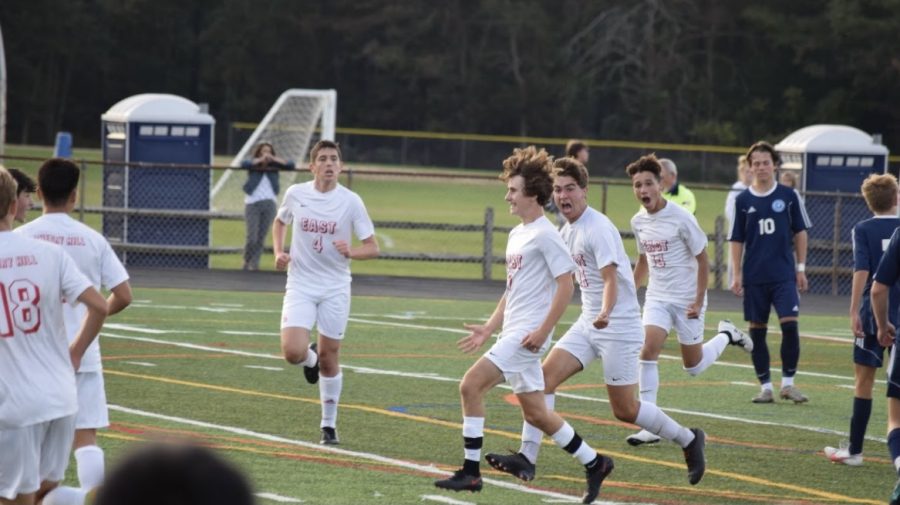 Senior Hank Feudtner celebrates with his team after scoring a goal vs. Shawnee on Tuesday.

Sports are fully underway for this fall season at East and there was lots of action this week. Of course, COVID did provide its fair share of cancellations and rescheduling, but overall the majority of the games and meets were participated in, and there was lots to cover.

The Cougars football team faced off against Camden Catholic on Friday night. It was a much-anticipated game for East as they travelled to Catholic in an attempt to get that first number in the win column.

It was a nail-biter throughout. That October air that is synonymous with football was on full display as the limited fans in the stadium provided enough noise for it to feel like any game. The first quarter saw a defensive showdown with many punts and several tackles for loss. East senior Jadon Louis began to make his case for All-Conference with a big sack and two huge tackles in the backfield. Camden Catholic running back Marques Hicks (‘23) was his opponent for most of the game as the two met in the gaps often. Hicks had two rushes for first downs in the quarter, but outside of that there was very little action as it was 0-0 heading into the second.

The second quarter began with East rising up to block a Camden Catholic field goal. Running back Nick Brown (‘21) was the workhorse once again for East as he would rush for 119 yards this game. He would cut through the defense for a 20-yard rush the next play, but was stripped of the ball, falling into the hands of a Fighting Irish defender. East cornerback Moustapha Fall (‘21) was another exceptional defender this game for East as the cornerback made several key tackles on the Irish running backs. East would drive after a punt and took it from their own ten to the opponent’s thirty with key runs from Brown until the drive was cut short after a fourth down incompletion. Another big Louis sack and several pass deflections from Tyler Burke (‘21) and Fall would end the half 0-0.

The second half is where it heated up. Coach Andrew Daley began a tactical showdown against Camden Catholic coach Gary Onuekwusi. A hard count by quarterback Seba Miller (‘21) forced an Irish offsides and the read-option with Mark Hendri (‘22) and Brown as threats was on full display as well. Danny Yasenchak (‘21) made a huge first down catch for a gain of 18 on this drive, but there was a fumble several plays later. East rose to the occasion on defense and a long catch by Rome Ciocco (‘23) set up East at the seven. A Miller scramble and QB sneak put East on the board with a 6-0 lead. The next play sent the stadium into chaos. As Yasenchak kicked off to an Irish returner, George Inge (‘23), Inge would return it over 80 yards for a touchdown. Both of these scores had extra points blocked and we had a tied game heading into the fourth.

The fourth quarter saw a Justin Becker (‘21) out route at the twenty end up at the thirty with some shifty moves that broke the defenders. Brown found his groove as well, taking consecutive rushes for a combined 50 yards. Miller would scramble two plays as well, both for big gains and one coming on a fourth down. But the following play saw Brown break through the defense, get tripped up and have the ball popped out with a swarm of defenders around him. An Irish defender would scoop it up and take it almost 97 yards for an Irish score. The extra point was blocked. This play would seal the game for the Irish in a performance that East dominated. After East would punt, Catholic’s running back Hicks began to take over. He would score later in the drive on a short touchdown. The extra point was good. East would lose 19-6 in a game that they had ripped from their hands.

The Cougars boys soccer team was coming off of a big 2-1 win over Washington Township last Friday, but faced two tough opponents in Shawnee and Paul VI this week.

The Shawnee game on Tuesday pitted the boys against the no. 16 team in the state, but they truly dominated in a controversial loss. The first half saw a back-and-forth game possession wise, with East’s back line of Rei O’brien (‘21), Drew Luehrs (‘21), Jordan Grossman (‘21) and Trey Shaw (‘23) protecting goalie Matt Mueller (‘21) for the majority of the half. It was only in the 15th minute where Shawnee would score a header off of a clear push from the attacker. The refs decided against calling the foul and the Renegades got out to a lead. East had even more chances in the second half, and it took a Hank Feudtner (‘21) strike from eight yards out to tie the game up. The build up play was from Adam Blumenthal (‘23) and Luke Luehrs (‘21) grabbed the assist. More chances from Jakub Semelko (‘23) came close but without fruition, and Shawnee attacker Andrew Kitch (‘23) would net his second goal with seven minutes remaining.

The Paul VI game on Thursday had its fair share of controversy as well. Patrick Keller (‘21) was in net for East and it was the same three sophomores mentioned above that would lead the charge for East. The game saw two yellow cards against East and a late red card that forced East to play with ten men later on. The first half was without much action until Brad Maslowski (‘22) would convert on a penalty that should never have been called in the first place. East shot the ball over 19 times this game and was unable to put one in the back of the net even after several free kicks put them in threatening positions late in the game. Paul VI took home a 1-0 lead in a game East dominated.

The boys soccer team is 1-2 and faces Glassboro and Camden Catholic next week.

The Cougars girls soccer team had started their season off with a 3-1 win over West Deptford last Friday and entered the week facing a premier Shawnee girls team and a tough Paul VI opponent.

Shawnee is a top-20 team in the state and showed it with goals from trio Brooke Steel (‘22), Sophia Drea (‘22) and Aleesha Deshmukh (‘22). The Cougars were led by La Salle commit Jillian Drumm (‘21) and Alyssa Bui (‘21). The Cougars held off the Renegades for a fair share of the game until the opposition broke through.

The Cougars attempted to bounce back against a Paul VI opponent that began the season 1-0-1. Elizabeth Sommeling (‘23) netted the sole goal for East off of a direct free kick in a 4-1 loss. The Eagles had a 2-0 lead heading into halftime, and an East rally couldn’t come through as the Eagles scored another two goals in the final few minutes.

The girls play against Eastern and Camden Catholic next week before a matchup with Haddonfield next Monday.

The field hockey team took the field three times this week in hopes of bouncing back after a 9-1 loss to Washington Township last Thursday.

In the first matchup against Shawnee, the girls suffered a 9-0 loss https://eastside-online.org/sports/cherry-hill-east-field-hockey-loses-9-0-to-shawnee-on-monday/ and faced Paul VI on Wednesday in another home matchup. This Wednesday’s game was senior day for the girls and all 7 seniors were celebrated (Alexis Goldsmith, Lauren Kahn, Tori Jeffery, Becca Allen, Aubrey Demurjian, Mary Fleischman and Julianna Alcamo). The game started off hot with a 1-1 tie heading into the half. The lone goal for the Cougars was scored by Julianne Alcamo. The second half saw Paul VI take over with 6 goals in what would finish off as a flukey 7-1 Paul VI victory. In Friday’s match against Cinnaminson, the girls would suffer a hard-fought 3-0 defeat. The game was close throughout, but Cinnaminson eventually pulled ahead against an East team that has been fighting all season long.

The girls tennis team finished the week 2-0 after a 3-2 loss against Shawnee and a 5-0 win against Paul VI last week.

The first match against Eastern on Monday saw the girls secure a 5-0 win in a dominating performance. In the initial varsity singles matchup, Elliana Tonghini (‘22) took down Lela Phung (‘22). The second match saw Sophia Liu (‘24) defeat Nadine Litvak(‘22). And in the third singles match, Julia Chan(‘23) took down Abigail Serata(‘22). This clean singles sweep was their second of the season (first against Paul VI), and shows what this team can do in the postseason. The doubles partnership of Sofia Pavlenko(‘21) and Vivian Zhao(‘22) took down Lily Coyne(‘21) and Sydney Gold(‘21), while the duo of Kristina Battsogt(‘22) and Lisa Gorbatti(‘21) defeated Melody Dias and Magha Kumar(‘24).

The Cougars Friday match against Bishop Eustace was cancelled, and their short season continues with a game against Cherokee next Friday.

The boys and girls cross country teams raced at Bucks Mill in one of the biggest meets of the season on Saturday morning. The cloudy and brisk air was ideal for the East runners, who were facing several key schools, including Haddonfield Memorial, Summit High School, Westfield High School and 5 others.

That wraps up the first full week of sports at Cherry Hill East, check back next Saturday for the second week’s recap. ROLL COUGS.