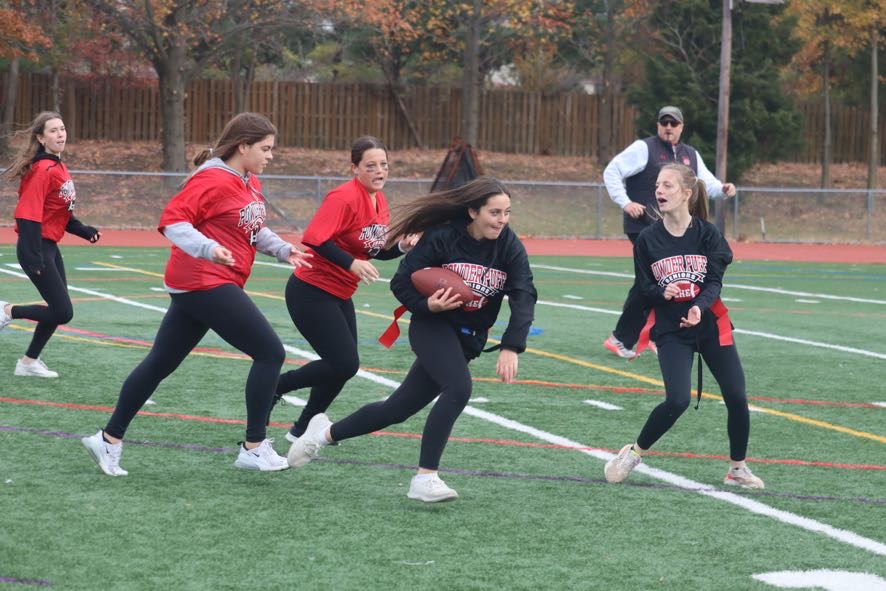 Cherry Hill East held their annual Powder Puff football game after an unprecedented year on November 14th. Spirit at East was on a rampant high and the senior and junior girls delivered an amazing performance after attending numerous practices throughout the month of October and early November. With the upperclassmen grades coming together and loud cheers ringing throughout the East stadium, the game was not one to miss and an amazing kickoff to a year back in person together.
After comebacks and unbelievable plays, the game ended with a final score of 28-24. Decked out in their black Powderpuff jerseys, the seniors won the annual game.
The seniors accumulated a whopping 24 points through four touchdowns. Devyn Levin (‘22), Lily Lazarus (‘22), and Marisa Rappaport (‘22) led the senior cougars to triumph. In the second quarter, Levin caught a pass thrown by the initial quarterback Megan Wheeler (‘22). Soon after, Lazarus caught a long pass thrown by Wheeler and ran it 40 yards to reach the endzone. The seniors were down by 12 at the half. After a scoreless third quarter for the seniors, they were able to rack up two more touchdown passes. After a great diving attempt from Lalitha Viswanathan (‘22) that was dropped, Rappaport caught a high and long pass from Levin, who was subbed in as the new quarterback.
To cap the lead for the seniors, Lazarus caught another long pass and sprinted towards the end zone, giving the seniors the win. Rappaport kicked the football through the uprights after both touchdowns to increase the senior’s lead by two.
The juniors had an exceptional run this year. They also had four touchdowns, led by juniors Olivia Hung, Paige Watson, and Julia Yasenchak. Aysa Sayany (‘23) riled up the junior side with an interception right as the seniors were about to score in their endzone. This propelled the seniors and juniors to an even closer fight to the finish. Jess Rosen (‘23), the junior quarterback, threw exceptional passes and helped end the game with a close score – less than a touchdown apart.
On the East cougar turf, amongst the laughs and ferocious shouts, a game of intense flag football was delivered and will be remembered for years to come.