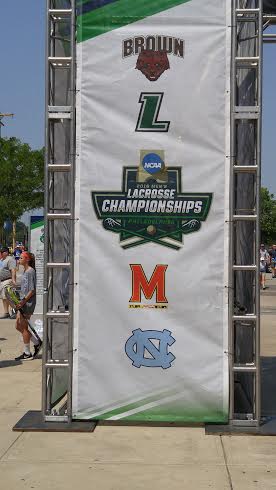 For the third time in four years, the NCAA held its annual Men’s Lacrosse Championships over Memorial Day weekend at Lincoln Financial Field in Philadelphia, crowning three champions. The action-packed weekend began on Saturday with two hard-fought Division I semifinal games. The Division II and III Championships were played on Sunday, and the weekend culminated on Monday with the Division I National Championship.

In the first game of the weekend against Loyola, UNC’s Cloutier led his team to victory, scoring half of UNC’s 18 goals. By putting nine in the back of the net in this semifinal game, Cloutier set a record for the most goals scored in a single finals weekend game. He capped off his incredible finals run with five more goals in the championship game, including the game winner in overtime. Throughout the entire NCAA tournament, Cloutier broke another record, scoring a combined 19 total goals over the 4 games his team played. This tremendous, record-setting performance won him the tournament’s Most Outstanding Player award.

In the Division II championship, two undefeated teams, Le Moyne College and Limestone College, faced off with Le Moyne defeating two-time defending champion Limestone 8-4. In a repeat of the 2015 championship, Le Moyne avenged its loss to Limestone. In the Division III game, Salisbury University knocked off two-time defending champion Tufts University by a score of 14-13.

The site of the championships each year is the center of the lacrosse world where fans of all ages congregate to watch the nation’s best collegiate athletes compete. Despite the scorching heat on Saturday and Sunday, and the lack of sunshine on Monday, over 82,000 tickets were purchased for the weekend by dedicated lacrosse fans that showed up each day cheering hard for their respective teams.

Rows of tailgaters spanned the many parking lots surrounding the venue. The festive environment greeted fans with a “Fan Fest” that included several attractions just before entering the stadium. Live music was played as fans had the opportunity to take pictures with the authentic 2016 Division I trophy, play a variety of entertaining games and receive giveaways from sponsors such as Coca Cola and Buick.

Across the street from the “Fan Fest” were a sea of tents with merchandise from some the top lacrosse stores and brands. Fans were excited to get deals on equipment and sticks. Many young children showed their excitement about their new sticks by carrying them into and around the stadium, and refusing to put them down.

As game time approached, the lines to enter the stadium grew very long. Fans eager to see the games chatted with each other, finding commonalities in the topic of lacrosse. In the line to enter the stadium was a father of a Towson University player. Even though his son had been eliminated from the Division I tournament just one game before the Final Four, he still chose to drive to Philadelphia from Yorktown, New York with his friend. “It’s still great to watch the games,” he said. “Academics should come first if you’re going to be a college athlete, but its great to be a part of the game.”  His son and Towson teammates also made the trip to enjoy the festivities despite their heartbreaking loss to Loyola the prior week.

For at least the next two years, local lacrosse fans will no longer have the luxury of attending the tournament in nearby Philadelphia. The NCAA regularly rotates where the Final Four weekend will be held. In 2017 and 2018, Gillette Stadium in Foxborough, Massachusetts, will host this exciting event.