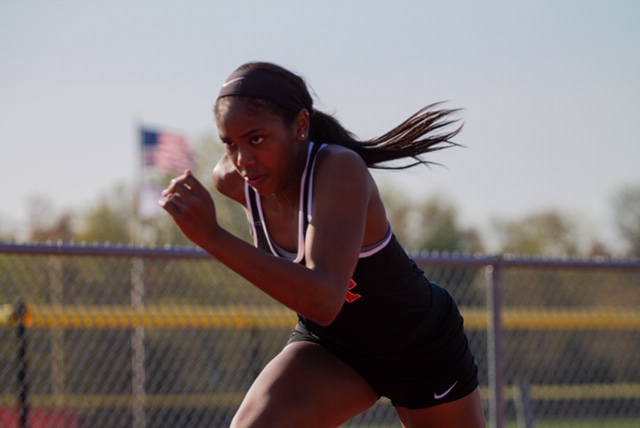 Drayton seeks to carry her skills and competitive spirit over to the Georgetown track next spring.

Maya Drayton’s (‘19) path to becoming a track and field star only started two years ago. As a sophomore at Cherry Hill East, Drayton tried out for the track team and decided to stick with it. Since then, she has won countless awards and broken a few records. In early November, Drayton committed to Georgetown University to run track.

According to Drayton, her father was the reason she began to run track.

“My Dad always wanted me to run, but I never liked it,” Drayton said.

Drayton runs the 100-meter, 200-meter and 400-meter races. As for this season at East, Drayton is looking to drop all of her times down significantly. She is also looking to stay in shape and get prepared for college track.

“I’m trying to be number one and go to Meet of Champions for all of my events,” said Drayton.
Drayton is a true competitor and she is always looking to come out on top. Her passion is winning.

Drayton started running track for Morris Estate Track and Field Club in the summer. There, she won an Athlete of the Meet award. She hasn’t been lacking in awards at East either, winning Sprint Team MVP, All-Team MVP, First Team Olympic Conference and Second Team Olympic Conference. Drayton has also broken a few East records. Her relay team broke the record for fastest times in the 4×400, 4×200 and 4×100.

Although Drayton said that the recruitment process was very stressful, it taught her a copious amount of skills.
“[The process] taught me how to communicate with coaches, to call people back and to communicate through email and to get my name out there,” Drayton said.
She also said it introduced to her to a lot of new people and schools.
“When I went on different official visits, I got to talk to girls who were already on the team and I got an idea of what it would really be like to be on a college level of athletics,” Drayton said.
Although the process was very stressful, she said it was very rewarding in the end. It showed her what she was really capable of doing.

Drayton’s first official visit was to Georgetown and she really liked it.

“The coach was very nice, I liked the girls, the campus was really nice and it’s a great fit for what I want to end up doing in the future career wise,” Drayton said.

Georgetown University is located in Washington, D.C. and is only about two and a half hours away. She really liked how it wasn’t too far away from home and that she has family in the area.
Drayton also liked Syracuse University and Boston University, but Georgetown had too much to offer her.

Drayton loves running track and field for various reasons. She loves to win and the individual competition. She feels you need a different work ethic compared to different types of sports.

“I always said every other sports punishment is running, but that’s my sport. I feel it takes a lot more to do and be great at.”

Look for Drayton to speed past the competition in Washington D.C. next Spring.