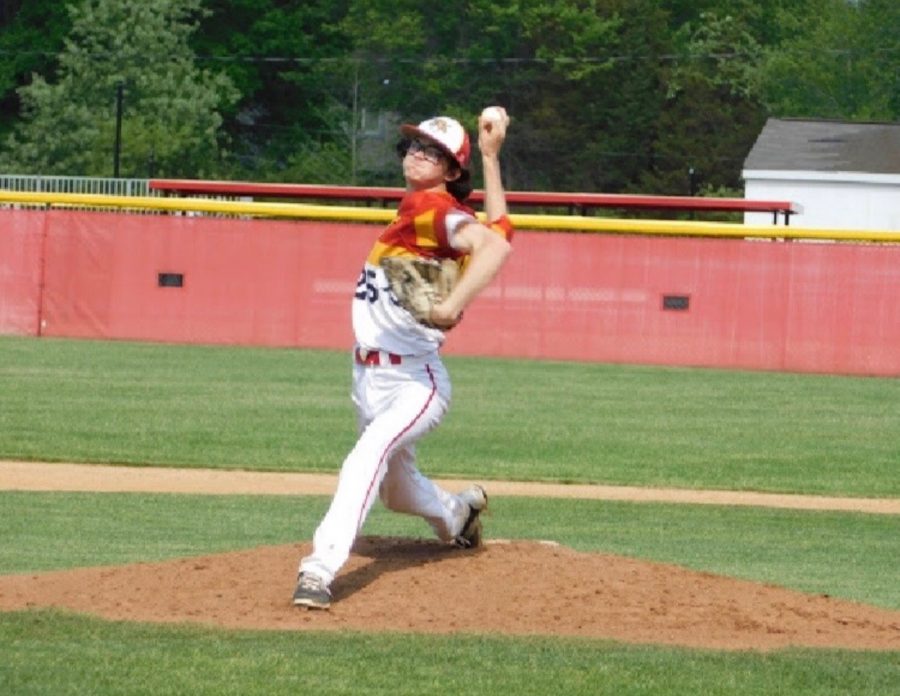 Lombardi gets ready to pitch the ball on the mound.

Playing a sport in college is an amazing accomplishment, but playing a sport in college with your best friend is a dream come true. This dream is a reality for baseball players, Joey Wright (‘19) and Steven Lombardi (‘19). Wright and Lombardi have recently committed to Immaculata University to play baseball. The two met each other at Beck Middle School when they were 13 years old, and have been very close friends ever since.

The two got an early start to the game of baseball, starting at the age of three. In the early stages, they played Little League baseball, but not together. While they have been close friends and teammates for the past six years, their competitive nature against each other has been going on since they were nine.

The two played for a variety of different travel teams. When they were 13, they played together for Team Advantage, and shortly after, they began playing for the Mid-Atlantic Show. After recently leaving The Show, the two began playing for Team Combat this past fall.

“I try to go to the gym every day… in the winter right now, I’ll have other workouts like pitching practice three times a week and I try to get as much work in as possible,” said Lombardi.

Lombardi credited his family for why he began playing baseball and for why he chose Immaculata.

“I started watching my brother when I was younger and I enjoyed it so I began to play as well… my mom went to Immaculata so that was a big reason for why I chose there to go,” said Lombardi.

The boys played for Coach Erik Radbill at Cherry Hill East, and said that he impacted them hugely. Radbill helped them with a variety of things. Radbill made them better athletes, taught them life lessons, contacted coaches at a variety of colleges, and helped them with their choices up until their commitment to Immaculata. With new Varsity coach, Jason Speller, the boys hope to continue the same mentality and continue to get better.

Wright committed to Immaculata one month ago. The coaches found him through a long process.

“My coach for the fall called their coach about me. I took a visit and then the coach saw some of my videos and then I committed from there,” said Wright.

“I think playing high school baseball helps because it’s really intense and really good competition… three other kids have committed to a variety of colleges on my East team,” said Wright.

Wright feels that Radbill helps players better and gets them ready to play at the next level.

As Wright and Lombardi begin their future together at a competitive college, they will look for the support of each other to help each other with any setbacks that may arise. Be sure to look for these two on the diamond this spring, succeeding together at the sport they love.