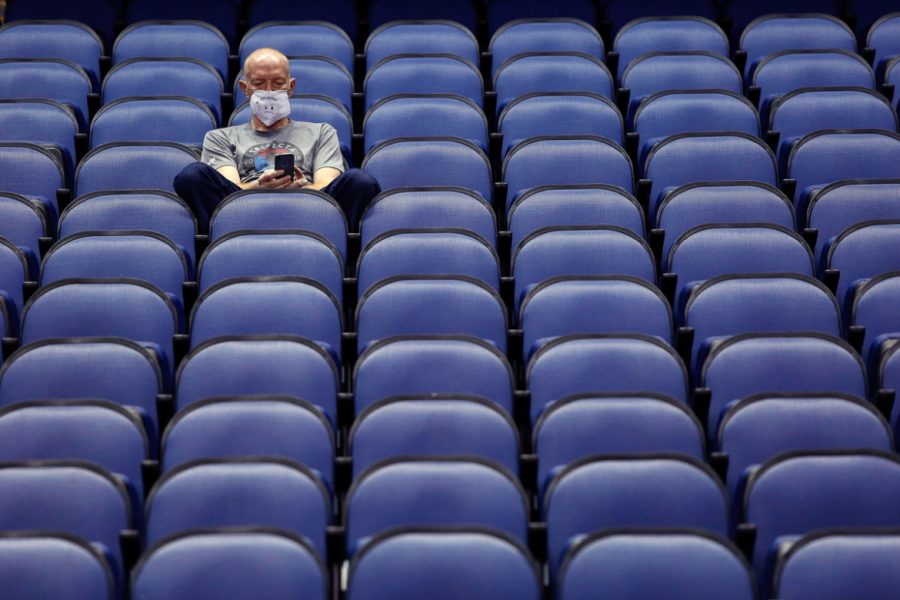 Fan sits alone in an empty Greensboro Coliseum after the NCAA college basketball games were canceled at the Atlantic Coast Conference tournament.

Along with the reopening of schools across the country comes the start of fall sports, including football, soccer, field hockey, marching band, and cross country. This year, as a result of the ongoing pandemic, sports seasons are looking a little different, whether it be on a professional football field or a high school track.

Over the summer, colleges around the country were forced to decide if they would let their students come back to campus, let alone play sports, to keep as many people as safe as possible. As a result, different conferences such as the Pac-12, Ivy League, MAC, and Mountain West decided that they were postponing their seasons to the spring. Additionally, the NCAA agreed that all fall sports championships will be postponed to at least spring.

The conferences that did decide to continue playing, such as the ACC, SEC, and Big 10, had to do so with modified seasons, in an attempt to not add to the ongoing pandemic. However, even with all the precautions put in place, outbreaks among different teams have continued to plague the conferences that have continued to play. Even the NFL and MLB have not been able to fully prevent COVID from impacting their players, no matter how many safety measures are implemented.

Contact sports as a whole are classified as medium to high risk, according to the NJ Department of Health. Furthermore, the highest risk for these contact sports comes from teams that travel to different geographical areas, as stated by the CDC. These facts, as well as the desire for the well-being of the country, and their individual athletes, factored heavily into many colleges’ decision to cancel their seasons, even with all the safeguards they could implement.

So, why then, are D1 athletes being forced to give up playing the sport they’ve dedicated a large portion of their lives to while less equipped middle schools and high schools, as well as wreck leagues in the area, are continuing their seasons?

Many colleges have weekly testing available for their students, which can not be provided by secondary schools. Frequent testing helps limit possible exposure to COVID. Moreover, when an outbreak does occur, colleges can quarantine the infected without putting the family of those infected at risk. For the most part, student-athletes in college are living in dorms, and if or when they test positive, they can be moved into the dorms used for quarantining. However, high school and middle school athletes are returning from practice every day to their homes, putting not only themselves at risk, but their entire families.

Though Cherry Hill East and West, along with our three middle schools, have mandated health-screenings via google forms every day and ask their athletes to wear masks as frequently as possible, there is still a high chance of exposure during both practices and games. Currently, since COVID cases have been increasing in New Jersey, playing sports should not be a priority.

Although physical activity is an integral part of teenagers’ daily lives, there are much safer ways of getting active. Instead of traveling to different schools in New Jersey, which increases the risk of transmitting Covid-19, individual schools could have isolated, socially distanced events. This would keep the team atmosphere alive and allow kids to play the sports they love, without putting their health and the health of others at risk.