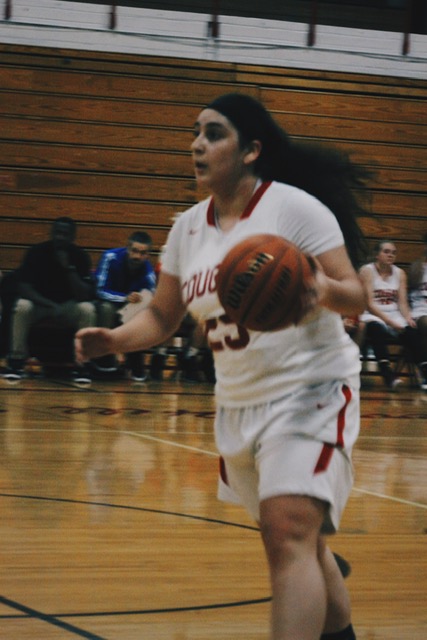 Yaya Villegas ('20) dribbles the ball to the basket.

Every year, the Cherry Hill East Cougars look forward to the game against division rival Eastern Regional High School Vikings. It is one of the games that the girls circle on their calendars and prepare extra hard for at practice. However, the Vikings pulled out a gritty win against the Cougars in this chapter of the record book, with a final score of 46-31. Eastern’s Gabby Payne (‘19) led all scorers with 17 points, and her teammate Anna Accardo (‘19) added another 15 points. Yaya Villegas (‘20) led the Cougars with nine points, all of them coming from beyond the arc.

The Eastern game means a little extra to Erica Brunson (‘19), who added six points to the Cougars’ total, because she played for Eastern her freshman year before transferring to East. She is friends with many of the girls on the Vikings, which lit a fire under her.

“It is always fun [playing against Eastern], but also competitive. In the end, we’re all friends, but when we’re on the court, it’s totally different. I play more aggressively against them,” Brunson said.

To start the game, Eastern controlled the tip. Eastern scored the first four points before Brunson was able to drop in a layup. As the quarter went on, East was plagued by fouls and turnovers, which surmounted in an Eastern 7-0 run. Maya Drayton (‘19) and Villegas were able to stop the run with about three minutes left to go in the quarter. At the end of one, the Cougars trailed 18-9.

Although the first quarter did not go their way, the Cougars were able to bounce back and hit their stride in the second quarter. A Villegas three started a 5-0 run to cut down the lead. However, many questionable calls by the referees angered coach Bernie Hynson, who was issued a warning by the referees. Daniella Schreiber (‘19) was able to score in the paint and then come up with a big steal on the ensuing possession. At the half, the Vikings led 20-17. The Cougars won the quarter 8-2.

After halftime, East started with the ball. After getting fouled, Schreiber was able to sink the second free throw. Villegas hit a huge three to bridge the gap a little closer. Emma Wolf (‘20) scored four consecutive points, but they were not enough, as the Cougars trailed the Vikings 35-25 at the end of the third quarter.

To start the fourth, Brunson made two consecutive baskets. However, that was just about all of the offense that the Cougars were able to generate all quarter, as the Vikings kept hitting their shots and playing lights-out defense. In the end, the Vikings sealed the victory with free throws.

The Cougars, now 2-2, look to take home a few wins in the New Egypt Holiday Tournament over winter break.