East pulls off a win against Highland in the Virginia B. Whittaker Tournament 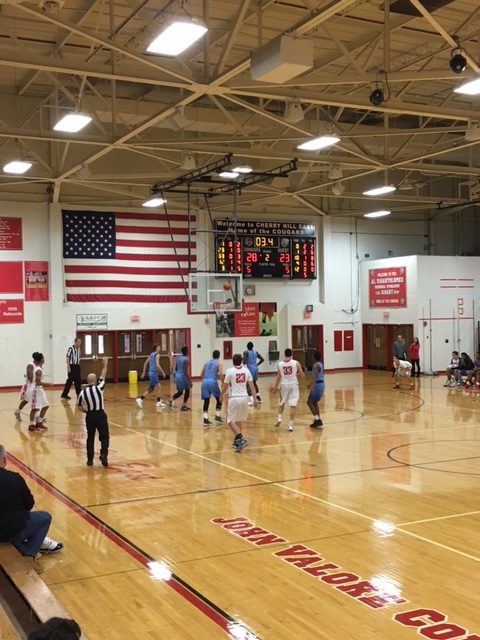 Sam Serata hits the 3 as the clock winds down before halftime.

Although the Cougars have not gotten off to a hot start this season, currently being 2-3, they have the opportunity to start the new year off with a winning record after today’s win against Highland, putting them at 3-3.

Jared Ohnona (‘18) had the first points of the game for the Cougars after Highland started off hot, making the game 2-5. Josh Hall (‘18)  and Sam Serata (‘19) both hit threes which kept the Cougars right on the heels of Highland as they finished out the first quarter with a score of 11-14.

From the beginning of the second, Serata came out hitting a deep three and after being fouled, the Cougars took the lead for the first time, 15-14. The real story of the second quarter was the emergence of Jacob Rose (‘19) who drained a three followed up by a steal. He then took it to the rim for two putting the Cougars in good position going into halftime with the score being 28-23.

The third quarter was dominated by the Cougars with Dienye Peterside (‘18) stealing the ball and Gibson (‘19) finishing the job for two. The Cougars began to pull away after a huge three from Colin Prendergast (‘19), who transferred from Eastern this year, to make the score 37-29. Hall and Peterside each had two heading into the 4th quarter creating a 12 point lead that would help them close out the game in the fourth quarter with the score at 41-29 Cougars.

Gibson was fouled early but went 4/4 on free throws and Serata went 3 for 4 from the line while scoring six points to wrap the game up with a score of 56-45 Cougars. Serata had nearly half of the Cougars points with a total of 24 while Gibson had ten and Hall with eight to assist the Cougars to another great win.

The Cougars are now 3-3 heading into a huge game against Cherry Hill West where they could start the new year off with a winning record. Come watch the East Cougars face off against crosstown rival Cherry Hill West on December 30 at 12:00 for a exciting game in the Dibart Gym.