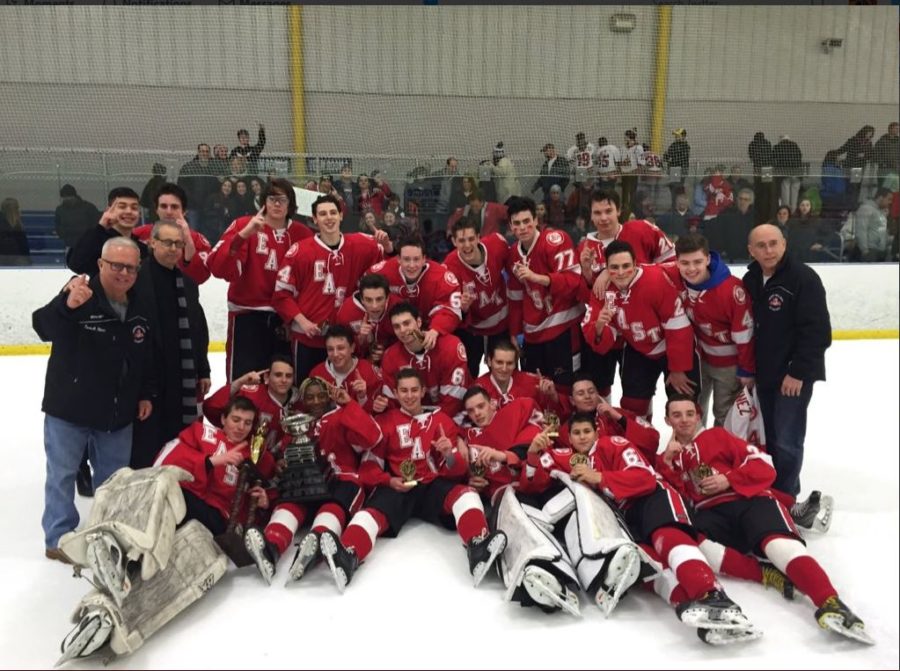 The East Ice Hockey team is roaring and ready for their championship showdown.

The Cherry Hill East Ice Hockey team defeated HLV on Friday, March 2, with a score of 5-2. This was the second game of the playoffs for the title of State Champion. After HLV won the first, East’s win now forces a third game between the teams for Monday, March 5.

By the end of the game, East proved to have a much stronger offense, ending with a count of 38 shots on the goal, as compared to HLV’s 20 shots.

In the first period, East struggled with their defense, after Antonio Musciano (‘18) let HLV slip through his defense and score with just under three minutes remaining in the third. East’s defense let two shot attempts from HLV go by within the first minute of the game.

Their offense started weak as well, as East could not even get a shot in when HLV had two men in the penalty box, and East outnumbered them on the ice 5:3.

The first period ended with the first fight of the night breaking out by East’s goal, sending one man from each team into the penalty box. East was left trailing behind HLV, 1-0.

By the second period, East’s defense continued to lag, but their offense stepped it up. They scored three times within that period, including one by Musciano as redeemed himself with a strong offensive play, and another by Johnny Pearson (‘18) (who plays on East’s team as a Cherry Hill West student).

The game stayed aggressive, including many altercations between the two teams. With one minute left in the second period, one man was in the penalty box for East, with two in the box for HLV. The period ended with East turning around the score, leading 3-1.

By the third, East was clearly on their A-game, both offensively and defensively. Both Ethan Chase (‘20) and David Cutler (‘18) scored within the period. HLV only could sink one shot during the period, which was not enough to claim back the lead.

The cougars stayed tough after every hit during the game. Jared Fisch (‘18) was slammed by HLV during the third period, but got back up after a period laying on the ice. Jacob Holland (‘20) left the ice at the end of the last period with a broken collarbone.

Some key players for East in the game were Pearson with his strong offense and Fisch through his toughness. Additional players whose performances are worth mentioning were Jack Amon (‘18), Sean McKenna (‘19), and Luke Steele (‘20).

A large weakness for HLV tended to be their defense, and goalie. They also were

constantly called off-sides throughout the game.

East’s cheering section participated in a “black-out”, all wearing black clothing. They had a much greater turnout fan-wise in contrast to HLV.

Throughout the game, East’s fans blasted music through a speaker and banged on the glass in support of their team.

The deciding game three is on Monday, March 5 at 7:30 at Flyers Skate Zone.