East Football defeats Hightstown for their second win of the season 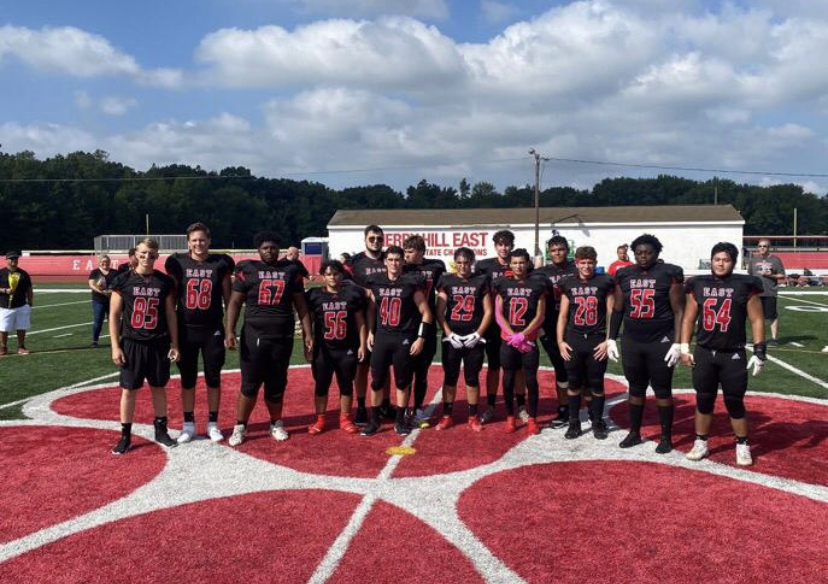 The Cherry Hill East Football Team celebrated after their second win of the season.

With four minutes and 19 seconds left in the 4th quarter, Ben Cohen (‘24) dropped back in the pocket at his own 18-yard line. He launched the ball downfield to Mark Hendri (‘22) who beat his defender and made a great catch then went all the way into the endzone for an 82-yard touchdown. On the next Hightstown possession, Ethan Haddock (‘23) intercepted the quarterback’s pass on the first play of the drive to give the Cougars all the momentum.
The Cherry Hill East Cougars (2-4) defeated the Hightstown Rams (2-3) by a score of 14-0 on Saturday afternoon at Cougar Stadium.
The Cougar’s defense shined as they had their first shutout of the season in an all-out dominant performance.
Haddock, who had two of the team’s four interceptions, felt that the turnovers gave the Cougars a huge boost of confidence.
“I was happy to get my teammates amped up. Giving the offense the ball back was key so they can do what they need to do; score.”
Scoring is exactly what the Cougars did in the 4th quarter. After the 82-yard touchdown, East knew that they had to score again as it was only a 7-0 game. The Haddock interception set the offense up at Ram’s 33-yard line. The Cougars had to go for it on 4th and 7 when Cohen once again found Hendri for a 15-yard completion. Two plays later, Maurice Sample (‘24) rushed for 12 yards to set the Cougars up inside the 5-yard line. Then on 2nd down, Sample rushed up the middle for a 3-yard touchdown to put the Cougars up 14-0.
Sample, who finished the game with 81 yards on 22 carries, felt great about the team’s performance today.
“I think our defense really stepped up and our offense made big plays when we really needed it. I also want to shout out Mark (Hendri) for his touchdown catch on his birthday.”
This was a huge win for East considering they lost to Hightstown 35-0 last year. The team was motivated to get redemption and they did just that.
“This was a big win for the program,” Coach Daley said after the game. “Hightstown is a hard-nosed, well-coached team. Our guys grinded it out for four quarters and we were able to come away with the victory.”
The Cougars are back in action next Saturday at 11:00 am vs Bridgeton (3-3) at Cougars home Stadium.