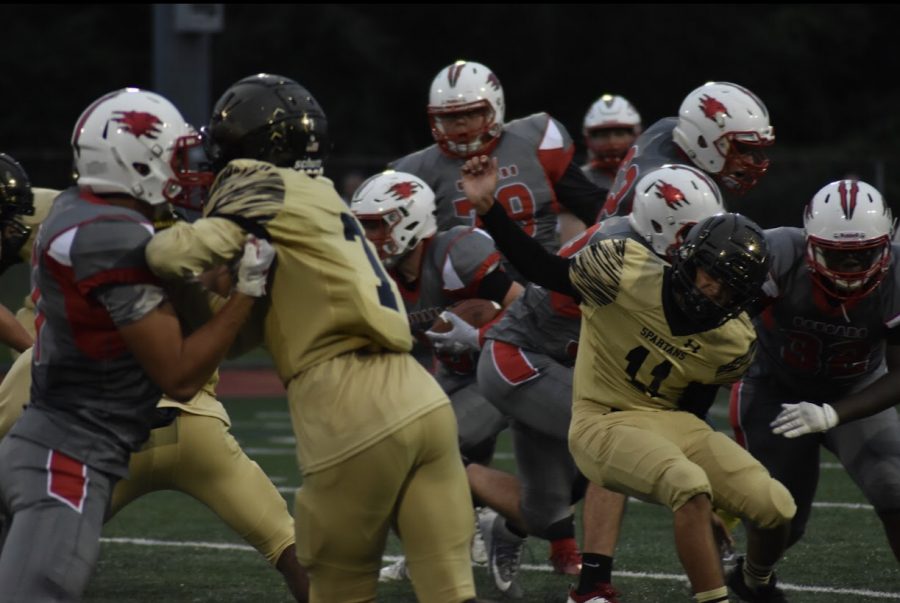 Cherry Hill East Cougars and Deptford Spartans battle it out on the field.

It was another rough start on the gridiron for the Cherry Hill East Cougars’ football team, as they kicked off the 2019 season with a tough loss to Deptford. From the starting kickoff, Deptford had control of the game. The Deptford Spartans quickly racked up points, and by the end of the first half, the Cougars were down 34-0. Despite being shut out in the first half, the Cougars did have a few highlights, including almost forcing a safety and recovering a Deptford fumble.

In this season opener, the stands were filled with students in all black showing their school spirit and strong support. From the mood of the fans, people would never guess that the East Cougars were losing.

“There weren’t too many positives to take away from this game, but the crowd was electric. The stands were packed and that’s what high school football is supposed to be about,” said Coach Andrew Daley.

The Cougars started off the second half receiving.  Khalil Harden (‘22) was able to receive the ball and have a solid return. Later in the half,  Zach Fry (‘20) caught a pass in the end zone to score what would be the only touchdown for the East Cougars. With a long way to go, the Cougars did not give up and fought until the very end! On defense,  Brian Gokay (‘22) led the team with eight tackles. During all the excitement, the Cougars continued to fall behind as the Spartans scored another touchdown, making the score 44-6, with only seven minutes left of the third quarter. Unfortunately, the Cougars’ excitement was cut short when they fumbled the ball and the Spartans quickly recovered it with only a minute left of the quarter.

Regardless of the loss, the players seemed to be satisfied with their solid effort and appreciated the amount of support from the crowds of students that showed up for the game opener.

“I would just say that it was awesome to see so many people come out to the game to support us. [It] wasn’t the result we wanted, but we’re moving forward,” said linebacker/tight end Sean Coen (‘20).